So what’s a Misfit Flash?

A number of key players in the consumer-facing, wearable fitness market have emerged over the past few years. And, after developing their flagship devices, like the Fitbit Flex and Jawbone Up 24, the challenge now is to go bigger, better and more high-end with added functionality and improved design.

But there’s also a clear trend for these brands to cover the other end of the spectrum too, with budget trackers that may scrimp on materials and functionality at times, but stay stylish, wearable and capable of keeping tabs on your activity throughout the day. Jawbone released the Move toward the end of last year and Misfit brought out the Flash around the same time.

Over the past few weeks I’ve been reviewing the Misfit Flash, a budget-friendly fitness wearable that will track your steps and sleep throughout the day, as well as enabling you to add a variety of different exercises into the mix too.

Just like its big bro the Misfit Shine, the Misfit Flash is a versatile, coin-shaped device and can be worn on a strap, belt clip (both come with the Flash) or just slipped into your pocket. It has all of the same functionality as the Shine, but the big difference is that it’s not made of aluminium, but a lightweight polycarbonate, which is why it’s got a much more affordable price tag. 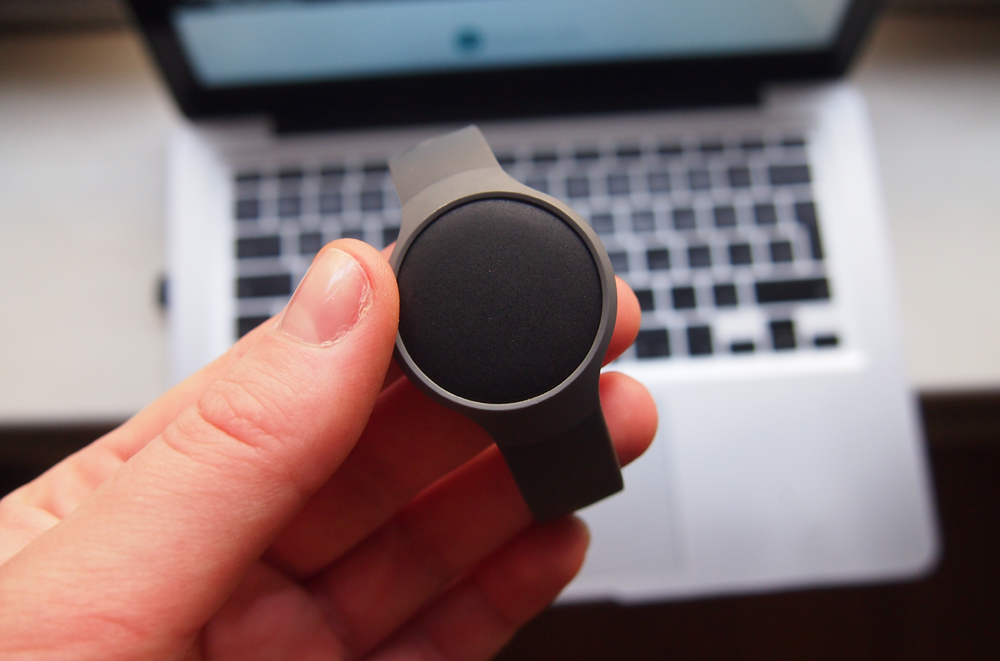 The Misfit Flash is able to track the calories you’ve burned, the distance you’ve travelled throughout the day, the steps you’ve taken and the quality and duration of your sleep.

To check on your activity progress, you need to push a hidden button in the centre of the device. Then a series of LED lights around the edge will flash depending on how well you’re doing throughout the day. (They’ll also tell you the time in their own cryptic way.) If you prefer to see all of your stats written out for you, you might prefer a gadget like the Garmin Vivofit or the Fitbit Charge, but the Flash provides you with an easy way to see your progress, which is often just enough info for me to walk a bit more or revel in the fact I’ve made all of the lights flash up!

Unlike many other trackers, which require you to go back through the day and ‘tag’ workouts, the Misfit Flash allows you to specify when you’re about to start exercising. A little like ‘checking in’ to your daily run. You can keep tabs on running, walking, swimming, tennis, cycling, basketball and… football. Great news for those who take part in those activities, a little annoying for those that don’t. Not that we’re complaining, as that’s a hell of a lot of choice for a basic tracker. You just need to make sure you strap it to the part of your body that’ll make it most efficient – for swimming this is on the arm, but if you’re cycling the Flash would much rather be on your shoe.

There are no heart rate tracking features built-in, like we’re seeing from newer devices like the Fitbit Charge HR, but you wouldn’t expect that from such a cheap tracker.

When it comes to sleep, the Flash can track both quality and duration accurately and fared as well as the Jawbone Up24 and Fitbit Charge in this respect. A notable capability of the Flash is that it doesn’t need to be put into sleep mode, like similar devices, but automatically knows when you’ve nodded off. 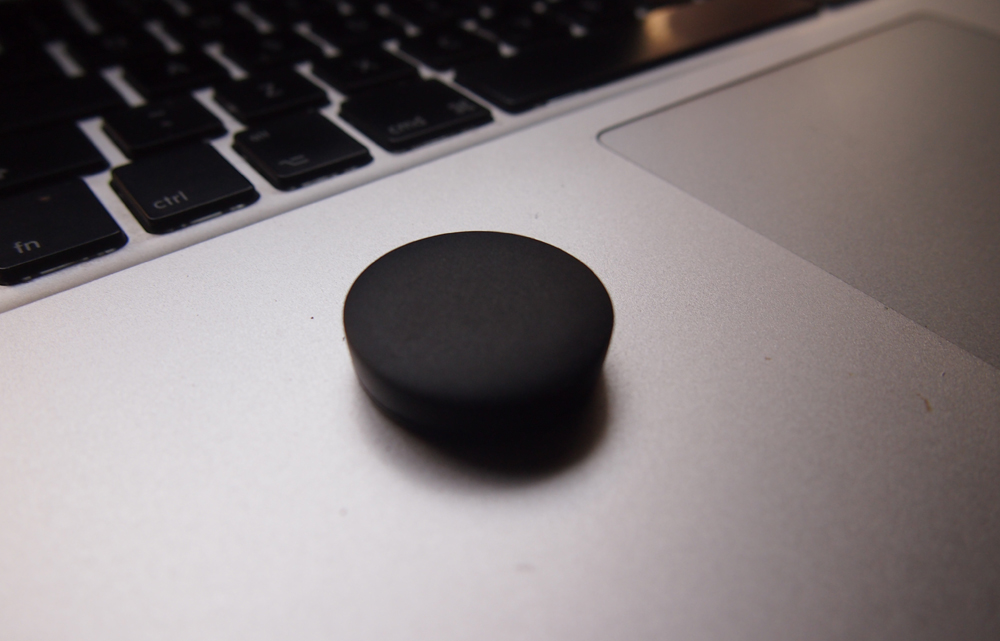 Just like the Shine, the Flash is a big winner in the ‘look and feel’ department. Its design makes it one of the most versatile trackers out there – it can be popped into your pocket, worn as a wristband or attached to… well… anything with its own clasp.

All of the marketing materials around the Flash call it ‘sporty’, but that’s only really the case if you use the wristband that comes with it or opt for one of the really bright colours. I’ve been using the ‘black onyx’ Flash over the past few weeks, which has suited me really well and goes with almost anything. But on the whole the colour options of the Flash are nowhere near as subtle as the shades of the Shine, which suggests it probably is aimed at a sportier or younger market.

Other reviewers have called out the quality of the plastic material, but although it’s clearly not as attractive as the exterior of the Shine, it doesn’t bother me and I’d probably opt for the cheaper version unless I had cash to burn.

The coin-sized Flash may not be as stylish as the Shine, but its polycarbonate shell means it’s a few grammes lighter. Although that might not seem like a huge lot of difference, it means when the Flash is strapped to your wrist it’s barely even noticeable. 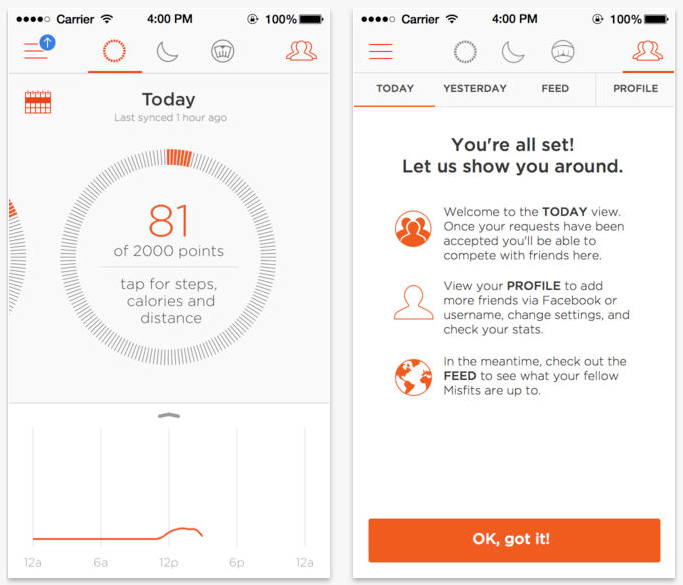 The Misfit app is relatively easy-to-use. Your Misfit Flash will sync automatically and display your data – sometimes it wanted me to tap the Flash on the screen, other times it did it from my wrist. So you’re able to see your activity from the day, how you slept the night before and also view an update of your goals to see how you’re doing from within the app.

In terms of social interaction, you can compete with others on a leaderboard, which is great in theory, but hardly anyone I know has one. So I’m kind of just competing with myself right now, which feels a bit sad…

The most disappointing thing about the whole Misfit experience is the app. It may look good at first, but in actual fact it doesn’t allow you to delve into your stats like Jawbone and Fitbit do. It’d be useful if it displayed more information about exercise, like pace, distance and overall performance. Unfortunately all Misfit wants to do is serve up a fairly arbitrary points system to you. When I first reviewed the Shine I found this lack of depth annoying, which I imagine is because I was much more active then and able to run every other day. Fast-forward a year and I’ve got a knee injury so only cycle and swim a few times a week, which means I’m not too concerned about the lack of extra data, but if you’re more active than me you may be a little disappointed.

It’s a similar story when it comes to sleep data. The app provides you with a really small graph that shows you what your deep and light sleep was like, but unless you’ve jumped up in the middle of the night and didn’t know, we doubt there’ll be anything interesting about it. 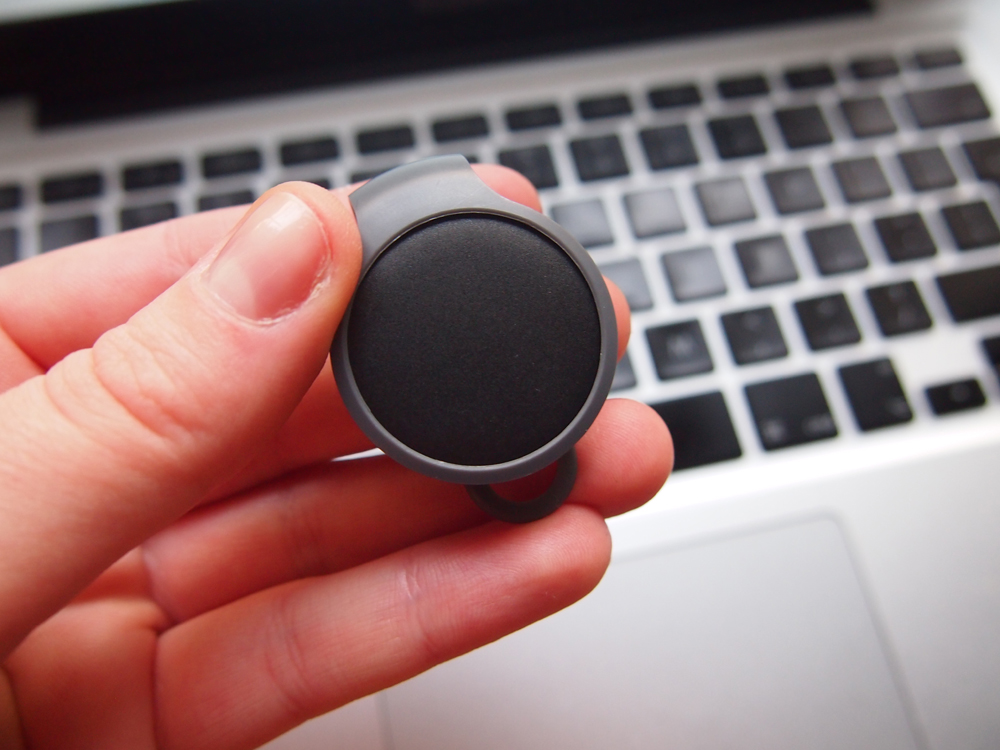 If you want an activity tracker that’s versatile, tracks your workouts and you don’t want to spend a fortune, then the Misfit Flash is a brilliant little gadget.

Unless the luminous colours excite you (I’m drawn to the bright blue), I’d opt for the black onyx because it’s a safe option and goes with most things. I tend to slip into into my pocket or wear it on my wrist when I swim.

While we’re on the subject of swimming, if you’re a keen swimmer this is the tracker for you as the Flash can be worn at the pool (it’s waterproof up to a depth of about 30 metres) and it’ll keep tabs on your swimming activity. Whereas other devices, like the new Fitbit Charge which I’ll be reviewing later in the week, aren’t as pool-friendly and won’t count all of the lengths you clock up while you swim. It’s great that you don’t need to keep taking it off to shower and swim, too.

The only big weakness of the Misfit Flash is its app, which admittedly isn’t too bad, but doesn’t do anything particularly meaningful or useful with your data other than present you with a teeny tiny little graph. Play around with the settings and make sure your goals are all updated, which should make some of the points and leaderboards a little more valuable.

To me it’s a great gadget for relatively lazy people. I know, I know, that doesn’t sound great. But I often forget to charge trackers that need constantly juicing up and have never successfully told a gadget I’m going to sleep. The Flash just seems a bit more intuitive and if gadgets running out of charge drives you a little bit insane, you’ll be happy to find out the Flash’s battery will last a whole six months.

Overall it’s great if you’re looking to track activity but don’t care much for delving into the data. I personally think this makes it an ideal candidate for those keen to move and exercise more, but who don’t take fitness too seriously. Integration with the likes of MyFitnessPal (and many other apps, too) also mean it’s a great device for those who are calorie tracking and hoping to lose/gain weight as they’ll need an activity tracking wearable to ensure everything is 100% (well nearly) accurate.

Summary: A cheap, brilliant little tracker built for fitness let down a little by its average app.

Most Android and iPhone devices, not available for Windows phone just yet.

You can get a Misfit Flash from the John Lewis website for £39.95 in most of the key colours, like blue, black, pink, white and red.