So what’s a Garmin Vivofit?

Well, Garmin began producing wristbands for serious runners with built-in GPS tracking years before this whole wearables trend really kicked off (take a look at the awesome Forerunner range here), but it’s only in the past year the brand has turned its attention from die-hard fitness fans to more regular consumers with the Garmin Vivofit.

Like many fitness trackers on the market today, the Garmin Vivofit promises to track steps, calorie burn, activity levels and sleep all from your wrist. Unfortunately it’s not got the GPS capabilities of some of its siblings, but it does provide users with just enough metrics to get them moving more and (in theory) motivate them to change their habits for the better.

When it comes to looks, the Vivofit is an amalgamation of a few of the top devices at the moment, with a Fitbit Flex-like band, a Nike FuelBand-like button and its slightly more unique screen complete with retro-looking numbers reminiscent of an old Casio watch from your teens.

The wearable is comprised of a core module that’s the brains behind the whole device and a band. What we maybe love most about the Vivofit is that the core module is charged up by two standard watch batteries. This means you won’t have to worry about power for a WHOLE YEAR, which sets it massively apart from similar trackers that need juice every other day. Even then all you have to do is pop another few batteries in and not bat an eyelid then for another year. Simple.

Garmin gave me a Vivofit to review, so I’ve been putting it to the test over the past few weeks. Read on to find out what I thought about it…

Press the one and only button on the Vivofit and you’ll see a range of metrics across the device’s screen, including the time, date, steps, steps remaining until you’ve smashed your goal, the calories you’ve burned and the total distance you’ve travelled. You can also see a feature called ‘heart rate’, but you’ll need to pair the device with a separate ANT+ heart rate monitor for that to work (unfortunately I wasn’t provided with one, so can’t tell you how effective the Vivofit is at measuring your heart rate just yet).

Of course if the heart rate-reading functionality had been built into the band itself that would have been much more appealing, especially for those who take fitness very seriously. However, it’s not always possible to get an accurate reading from your wrist (even though other brands are testing it out) and it would make the device itself much more expensive.

The device has a built-in accelerometer, meaning it presents you with an accurate reading of how many steps you’ve taken throughout the day and it translates that data into distance covered and refers back to the app to provide you with information about how far off from hitting your goals you are. The device unfortunately doesn’t have an altimeter, so it doesn’t know how hard you’re working to always take the stairs!

A nice little addition to the Vivofit is the red bar you’ll see across the top of the screen in my image shots. Now this is called an inactivity metre and what it does is start to remind you when you’re being super lazy. I didn’t always pay attention to it, but at times it was an effective reminder that I should take a walk, a break or just be a bit more mindful about the fact I’ve been a couch potato all day.

The Vivofit will also track your sleep (even though I get annoyed by wristbands during the night and often pulled it off in a sleepy daze), which I found to be pretty accurate given it guesses when you’ve fallen asleep by the fact you’re not wriggling around as much.

Now the Vivofit is a little different to some of the other super subtle bands on the market (we’re talking about the Jawbone Up 24’s and Fitbit Flexs of the world) and this is because it has its own LCD screen. The screen itself serves up real-time data about the way you’re moving and the time, as well as a whole host of other metrics that I’ve already covered off above.

Some people may find this annoying, if you like to passively track steps and activity throughout the day and then view them at a time that suits you, the Vivofit will just be a pain in the ass. However, if like me you want to keep tabs on how you’re doing, don’t want to have to keep looking at an app to tell you and like the fact a watch is built-in for you to glance at constantly, then the Vivofit is a welcome change to the bands that tell you absolutely zilch about your day.

I’m also a huge fan of the way the numbers are displayed. I’m sure there’s a technical name for the font or type of number sported on the Vivofit’s screen, but I’m going to refer to it as ‘old Casio style’ and I’m absolutely obsessed with this quirky, retro look accompanying me 24/7. Unfortunately though, the LCD screen isn’t backlit, so although it’s technically an ‘always-on’ display, that doesn’t mean it’s ‘always-visible’.

The Vivofit band is also one of my favourite options when it comes to looks because it comes in a wide range of different colours. The turquoise one I reviewed has to be my favourite, but for a pop of colour I also love the purple and cobalt blue. For those who want something a little more subtle, or if you work in a fairly formal office environment, then you can also opt for a plain black or a grey. As the core module can pop out of the band, you can also buy colours to suit different occasions and just switch them out as and when you need to – very handy!

The band itself is one of the comfiest options I’ve tried so far, probably due to the fact there are plenty of different sizing options and it’s made out of a soft, waterproof up to 50m (this is so vital if you’re going to wear it all day) silicon – most of the time you’ll probably forget it’s even there. It’s also worth mentioning that when you buy a Vivofit you’ll get two different band sizes in the box, a small and a large, which means you don’t have to fumble around figuring out which you need before purchasing.

You need to team the Garmin Vivofit up with the Garmin Connect app to get even more information about your day and set some goals. Luckily, the app is free and also available for both iOS and Android devices.

Once you’ve set up a Garmin account and created your own profile, you just need to hold the button down on your device until ‘sync’ appears and then all of the data gets transferred over to the app.

The app itself provides you with everything you need, settings, data and goal features, but although it’s comprehensive the data isn’t presented in a particularly appealing way, it’s small and hard to interact with – opt for the Jawbone Up 24 or Fitbit Flex instead if a great app experience is a must for you! 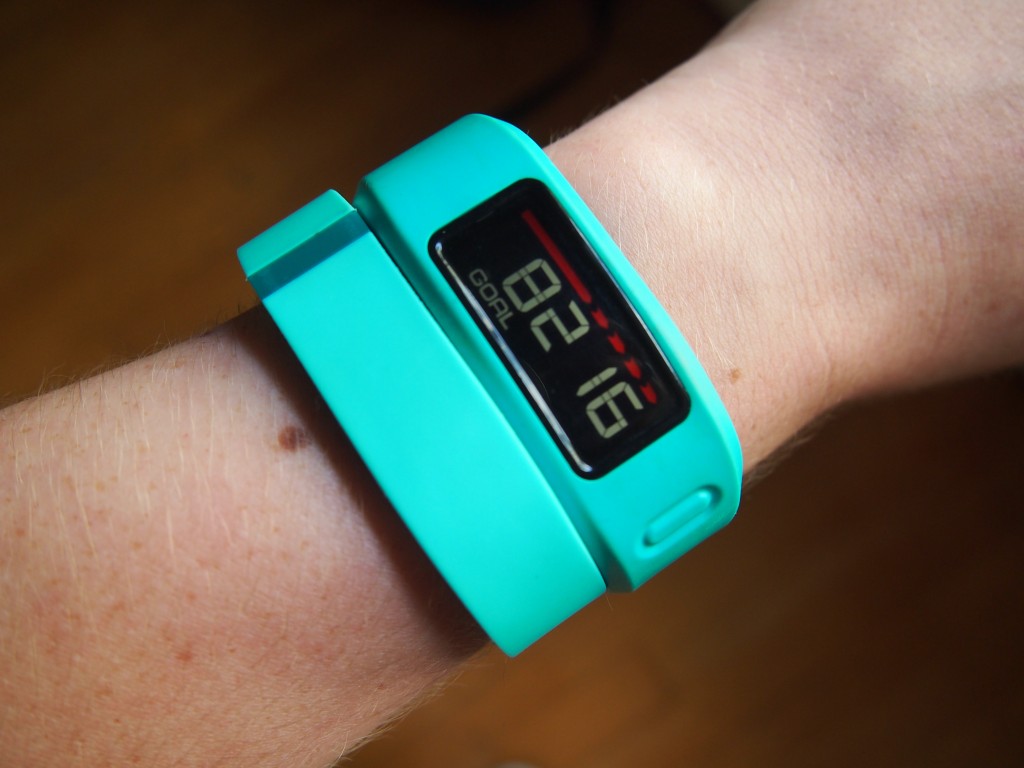 Well, the tech the Vivofit is packing is certainly up to a high standard for those after constant activity tracking and fitness logging a few times a week. Now admittedly the app is a little bit lacklustre compared to the super intuitive dashboards provided by Fitbit and Jawbone, but given the fact you’re served up data to the Vivofit’s screen that’s probably not a huge concern for most users.

On that note, one of the biggest differentiating factors between the Vivofit and other trackers on the market is that it comes with a screen. If you like the idea of being fed real-time data to your wrist AND swapping it for a watch then it’s probably one of the best options for you. If you like your wearables to be subtle and tell you nothing until you open up your phone, then give the Misfit Shine or Jawbone Up 24 a trial run instead.

It’s also a great option for those who forget to charge their gadgets – the Vivofit doesn’t need new batteries for another year, so if you’re prone to getting frustrated by juicing everything up each night, then this is probably a much better option than the thirsty Fitbit Flex or Jawbone Up 24. And for those who don’t want a fragile gadget that doesn’t like water – even though the Vivofit doesn’t have dedicated swim tracking features (thumbs down), it is waterproof to an impressive 50m.

Like I say with many of the wearables I review for shinyshiny, deciding which one is right for you is often a very personal process. We all have different needs, tastes and bugbears that can influence which product we’d like to get our hands on (or wrists into). Although, the Garmin Vivofit has definitely been the fitness tracker I’ve worn the most, which is really saying something given I’ve tried most of the key players already. It’s primarily down to the fact that the screen really suits my habits, the tracking is spot on and the colour matches my wardrobe.

For more info about the Garmin Vivofit, check out the dedicated page on the Garmin website here. Head on over to John Lewis to buy one from £79 in the full range of colours.

P.S. I’m currently trialling a Fitbit Flex, so keep your eyes peeled for my detailed review next week. (In the meantime, check out how the Garmin Vivofit and Fitbit Flex look side-by-side in the photo above.)