So what’s a Fitbit Flex?

My first ever wearable fitness tracking device was the Fitbit Ultra way back in 2012 (I reviewed it on one of shinyshiny’s past projects, Connected Health), so you could say I have a soft spot for the brand and its range of subtle, colourful fitness gadgets.

Needless to say, Fitbit’s product line has come on in leaps and bounds since the days of its clip-on trackers and now its flagship device* is the Fitbit Flex, a simple and subtle plastic wristband that can track steps, workouts and sleep cycles.

I tested out the Flex for three weeks and will share my thoughts, experiences and one or two concerns below…

*It’s worth noting that Fitbit did launch the more advanced Fitbit Force, aimed at those a little more serious about fitness who want to track their progress on a screen throughout the day. However, the device was recalled due to skin irritation issues.

The Flex monitors your steps throughout the day. We compared its step-tracking skills to both the Jawbone Up 24 and Garmin Vivofit to give ourselves a better idea of accuracy, and they all performed the same (give or take a few) in a number of short walking tests. The Flex’s app will convert these steps into the number of active minutes you’ve been moving, the miles you’ve covered and the calories burned up to make the data seem a little more interesting.

It also keeps tab on exercise and has a pretty comprehensive running tracker. If you want to do any other kind of exercise you’ll be a bit stuck – the Fitbit is only really geared up to keep an eye on your runs, walks and hikes. This is a bit of a shame given other trackers can track your swims and although the Fitbit Flex is waterproof up to 10m it just doesn’t have that kind of tech built-in.

Finally, it logs your sleep cycle, too. The great thing is you don’t actually need to tell the Fitbit Flex you’re sleeping. It’ll figure it out all by itself. You can then click ‘log sleep’ and double check the times look about right – they’ve always been accurate within 15 minutes or so for me. This is a great feature because many other trackers on the market need to be told you’re drifting off, which isn’t very intuitive and I always seem to forget to do it when I’m in a sleepy daze. 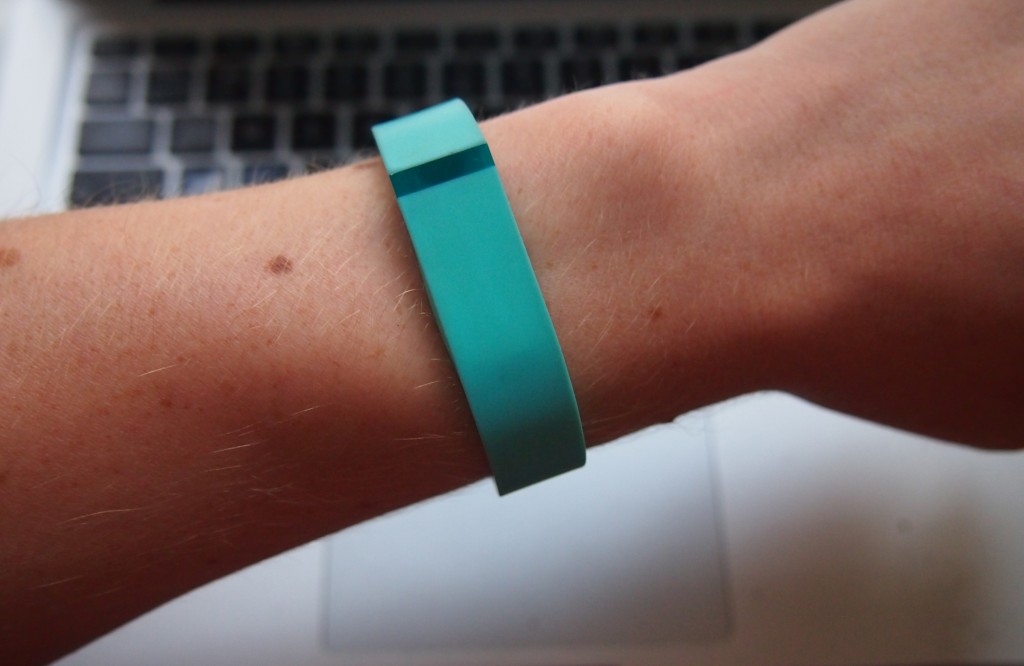 The Fitbit Flex technically consists of two parts, the inner sensor and the strap it squeezes into.

You’ll need to take the sensor out to charge it, but it slips back in easily enough. Speaking of charging, you’ll only need to charge the Flex once a week. This obviously isn’t as good as the devices that run on batteries, like the Misfit Shine and Garmin Vivofit, but in my experience was a little longer than the Jawbone Up 24, which needed a bit more juice after only 4 days.

I really can’t stress just how comfortable the Fitbit Flex is. Many have criticised its plastic look and feel, but it’s by far the most discrete tracker and the most enjoyable to wear. It certainly beats the likes of the Jawbone Up 24 and even the Garmin (one of my past favourites) in the comfort stakes.

After a week or so the band started to look a little grubby and worn, but you can buy all kinds of different coloured straps, which is great for those who don’t want to commit to just one shade – but no so great if you’re on a tight budget!

It’s not the most stylish device, but it is really subtle, which means it’ll look good with your workout gear and with a more formal outfit, which is one of the main reasons I prefer it to the Garmin Vivofit, the Garmin’s screen was a bit quirky, but just didn’t work with a floaty dress. Pick the right colour and the Fitbit Flex will. Well, probably.

The strap has a clear bar in it, which allows you to see the coloured lights on top of the sensor below. These give you a little reminder of how you’re doing throughout the day and how far you are from hitting your goals. I got used to the detailed info available from the Garmin Vivofit, but the gentle nudge the Flex gives you will probably suit more people. 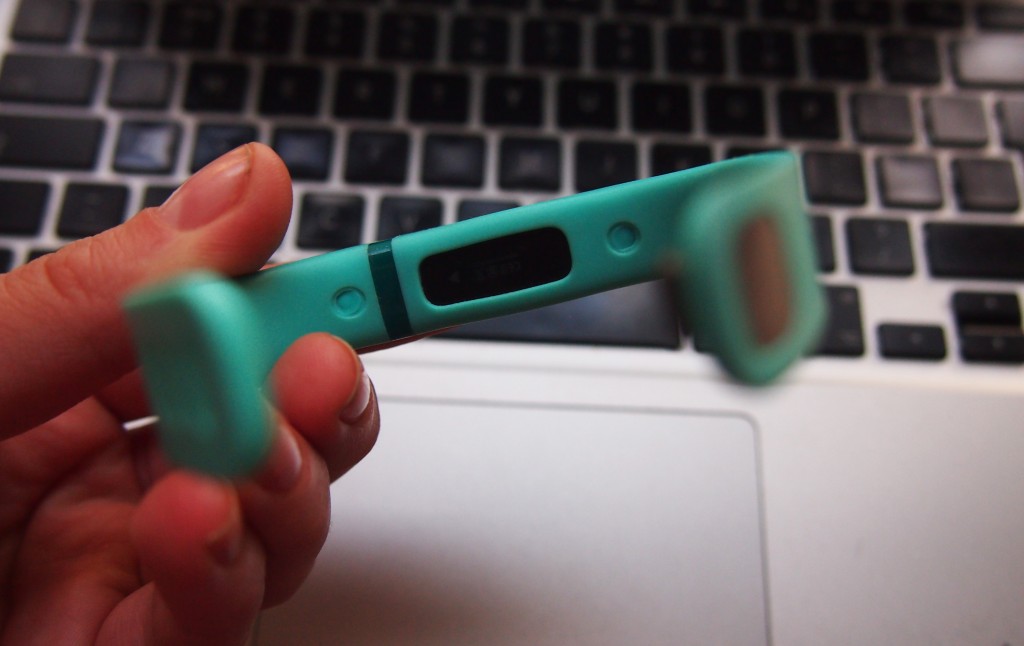 One of my favourite things about Fitbit is its app experience. It’s just so simple. Everything you could need is all accessible from one simple dashboard that presents the most important bits of data in a list. You can then easily ‘click into’ each option to find out more information about it, but most days you won’t need to.

In terms of data syncing, the experience was seamless and pretty much instantaneous given the device’s Bluetooth capabilities. It’s worth nothing that, according to several other reviews I’ve come across online, the process isn’t always that simple for Android users. Unfortunately I only had an iPhone to test the Flex out with, so I might be a little biased in this respect.

For those concerned with calorie tracking, the app is intuitive to use and track what you’ve eaten if it’s really basic. But the whole process is far from ideal because the Fitbit’s nutrition database is just so US-centric. There are rumours that a beefed up UK offering is on the way soon, but until then the experience is just plain annoying.

I can’t stress enough how important a UK-focused database is if a brand like Fitbit expects people to track calories on a regular basis. I tried it for a week and it was far too time-consuming to pick out separate bits of products I’d bought while I was out and about. It’s also not that accurate to log things in this way, so completely defeats the point of tracking your food intake!

Update: Fitbit would like us to make it more clear that MyFitnessPal works well integrated into the whole Fitbit experience and can be used to track calories. This is certainly the case and a great option for those already fans of MFP. Unfortunately, it still falls short of the Jawbone database, which has just been updated to be super UK-friendly.

If comfort is important to you and bracelets and wrist thingies usually annoy the hell out of you, then the answer is a resounding yes!

It’s also ideal for those after a fairly affordable, all-rounder fitness tracker who might want to monitor their runs, keep an eye on their activity throughout the day and track calories now and again, too. The app is great, so don’t be too concerned with the fact that the screen isn’t huge, but if you’re desperate to lose weight you might be a little bit disappointed with the calories database until Fitbit gets its act together.

If you take running more seriously, you might be content with the Fitbit Flex or you may want to opt for a device geared up specifically for running, like the Garmin ForeRunner range. The same goes for serious swimmers, the Fitbit Flex won’t track your swimming sessions, so opt for a Misfit Shine instead.

I’ve said it many times in my past reviews of similar gadgets, but wearables really are so personal. What works for one person may not work for the next and the Fitbit Flex is one of my favourites because it’s comfortable, it’s practical, I don’t have to fuss with it too much and the app is so easy to use. If like me you want something practical and simple, then take the plunge.

The Fitbit Flex is available from John Lewis for £69.99.

Update: The Fitbit Flex isn’t always available for under £70, it all depends on the retailer. If you want to get your hands on one, visit John Lewis, Co-Op, Accessory Jack, Currys and Argos, where it’s currently being sold for £69.99 or under.