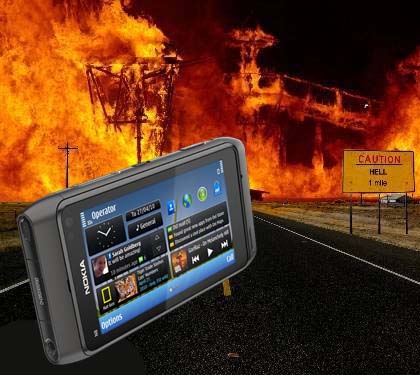 From being the world’s biggest phone manufacturer last year – and every year for the past 15 years – Nokia have now slipped to third place, behind Apple and Samsung.

Quarter 2 figures for Nokia from 2011 show that sales have slumped leaving the inventors of the smartphone (9000 Communicator, 1996) trailing two of its major competitors. Profits have taken a real hit as well. It’s very sorry reading for a company that defined phones for so long.

The unit sales of smartphones are down 31% from just 3 months ago in Q1 when Nokia still sold 24.2 Million smartphones.

The problem seems to be with Symbian phones which handset sellers seem to regard as on the way out. The bottom has fallen out of Symbian sales.

Profits
With the flagship phones taking a hit, so have the profits. In Q3 2010, Nokia made 500 million Euros, now they’re making an operating loss – and they’ve just slashed their prices..

Has Nokia bottomed out? Will they rise again?

Unlike say Blackberry which faces similar mid-term issues see – Why RIM need to stop being nice Canadians and fire some people: Disgruntled employee talks from BB HQ – Nokia admitted their failings last year and have taken up different strategies to stem the decline. But has it been too little too late?

– Partnership with Microsoft on Windows Phone 7 – out in September

I’m really keen for a great Nokia Windows phone to come out, but it’s taken so long. Lets see what September has to offer us…