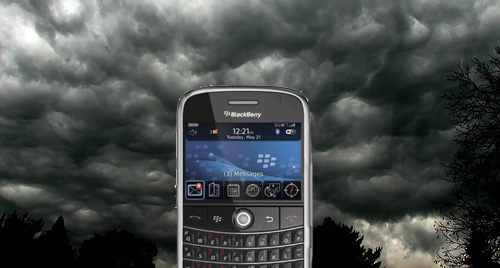 Blackberry still have a big customer base and great brand-name, but dark clouds are gathering over the smartphone makers and the RIM leadership refuse to acknowledge it. So it’s down to an anonymous disgruntled employee to voice some of the problems those higher up haven’t.

And s/he has – by sending an unsigned open letter to RIM. It starts:

To the RIM Senior Management Team:
I have lost confidence.
While I hide it at work, my passion has been sapped. I know I am not alone — the sentiment is widespread and it includes people within your own teams.

The writer goes on to make eight suggestions including the recommendation that Blackberry’s two leaders stop being “nice Canadians” and fire underperformers. And also that they watch a 1997 youtube video of Steve Jobs.

It makes sense.
The Steve Jobs video is pretty great. Key message: “Focus is about saying no.”

The letter in full:

I have lost confidence.

While I hide it at work, my passion has been sapped. I know I am not alone — the sentiment is widespread and it includes people within your own teams.

Mike and Jim, please take the time to really absorb and digest the content of this letter because it reflects the feeling across a huge percentage of your employee base. You have many smart employees, many that have great ideas for the future, but unfortunately the culture at RIM does not allow us to speak openly without having to worry about the career-limiting effects.

Before I get into the meat of the matter, I will say I am not part of a large group of bitter employees wishing to embarrass us. Rather, I believe these points need to be heard and I desperately want RIM to regain its position as a successful industry leader. Our carriers, distributors, alliance partners, enterprise customers, and our loyal end users all want the same thing… for BlackBerry to once again be leading the pack.

We are in the middle of major “transition” and things have never been more chaotic. Almost every project is falling further and further behind schedule at a time when we absolutely must deliver great, solid products on time. We urge you to make bold decisions about our organisational structure, about our culture and most importantly our products.

While we anxiously wait to see the details of the streamlining plan, here are some suggestions:

1) Focus on the End User experience

Let’s obsess about what is best for the end user. We often make product decisions based on strategic alignment, partner requests or even legal advice — the end user doesn’t care. We simply have to admit that Apple is nailing this and it is one of the reasons they have people lining up overnight at stores around the world, and products sold out for months. These people aren’t hypnotized zombies, they simply love beautifully designed products that are user centric and work how they are supposed to work. Android has a major weakness — it will always lack the simplicity and elegance that comes with end-to-end device software, middleware and hardware control. We really have a great opportunity to build something new and “uniquely BlackBerry” with the QNX platform.

Let’s start an internal innovation revival with teams focused on what users will love instead of chasing “feature parity” and feature differentiation for no good reason (Adobe Flash being a major example). When was the last time we pushed out a significant new experience or feature that wasn’t already on other platforms?

Rather than constantly mocking iPhone and Android, we should encourage key decision makers across the board to use these products as their primary device for a week or so at a time — yes, on Exchange! This way we can understand why our users are switching and get inspiration as to how we can build our next-gen products even better! It’s incomprehensible that our top software engineers and executives aren’t using or deeply familiar with our competitor’s products.

I’m going to say what everyone is thinking… We need some heavy hitters at RIM when it comes to software management. Teams still aren’t talking together properly, no one is making or can make critical decisions, all the while everyone is working crazy hours and still far behind. We are demotivated. Just look at who our major competitors are: Apple, Google & Microsoft. These are three of the biggest and most talented software companies on the planet. Then take a look at our software leadership teams in terms of what they have delivered and their past experience prior to RIM… It says everything.

3) Cut projects to the bone.

There is a serious need to consolidate our focus to just a handful of projects. Period.

We need to be disciplined here. We can’t afford any more initiatives based on carrier requests to squeeze out slightly more volume. Again, back to point #1, focus on the end users. They are the ones making both consumer & enterprise purchase decisions.

Strategy is often in the things you decide not to do.

On that note, we simply must stop shipping incomplete products that aren’t ready for the end user. It is hurting our brand tremendously. It takes guts to not allow a product to launch that may be 90% ready with a quarter end in sight, but it will pay off in the long term.

Look at Apple in 1997 for tips here. I really want you to watch this video because it has never been more relevant. It is our friend Steve Jobs in 97 and it may as well be you speaking to RIM employees and partners today. https://www.youtube.com/watch?v=3LEXae1j6EY

4) Developers, not Carriers can now make or break us

We urgently need to invest like we never have before in becoming developer friendly. The return will be worth every cent. There is no polite way to say this, but it’s true — BlackBerry smartphone apps suck. Even PlayBook, with all its glorious power, looks like a Fisher Price toy with its Adobe AIR/Flash apps.

Developing for BlackBerry is painful, and despite what you’ve been told, things haven’t really changed that much since Jamie Murai’s letter. Our SDK / development platform is like a rundown 1990′s Ford Explorer. Then there’s Apple, which has a shiny new BMW M3… just such a pleasure to drive. Developers want and need quality tools.

If we create great tools, we will see great work. Offer shit tools and we shouldn’t be surprised when we see shit apps.

The truth is, no one in RIM dares to tell management how bad our tools still are. Even our closest dev partners do their best to say it politely, but they will never bite the hand that feeds them. The solution? Recruit serious talent, buy SDK/API specialist companies, throw a truckload of money at it… Let’s do whatever it takes, and quickly!

25 million iPad users don’t care that it doesn’t have Flash or true multitasking, so why make that a focus in our campaigns? I’ll answer that for you: it’s because that’s all that differentiates our products and its lazy marketing. I’ve never seen someone buy product B because it has something product A doesn’t have. People buy product B because they want and lust after product B.

Also an important note regarding our marketing: a product’s technical superiority does not equal desire, and therefore sales… How many Linux laptops are getting sold? How did Betamax go? My mother wants an iPad and iPhone because it is simple and appeals to her. Powerful multitasking doesn’t.

BlackBerry Messenger has been our standout, yet we wasted our marketing on strange stories from a barber shop to a horse wrangler. I promise you, this did nothing to help us in the mind of the average consumer.

We need an inventive and engaging campaign that focuses on what we are about. People buy into a brand / product not just because of features, but because of what it stands for and what it delivers to them. People don’t buy “what you do,” people buy “why you do it.” Take 3 minutes to watch the this video starting from the 2min mark: http://youtu.be/qp0HIF3SfI4

6) No Accountability – Canadians are too nice

RIM has a lot of people who underperform but still stay in their roles. No one is accountable. Where is the guy responsible for the 9530 software? Still with us, still running some important software initiative. We will never achieve excellence with this culture. Just because someone may have been a loyal RIM employee for 7 years, it doesn’t mean they are the best Manager / Director / VP for that role. It’s time to change the culture to deliver or move on and get out. We have far too many people in critical roles that fit this description. I can hear the cheers of my fellow employees now.

7) The press and analysts are pissing you off. Don’t snap. Now is the time for humility with a dash of paranoia.

The public’s questions about dual-CEOs are warranted. The partnership is not broken, but on the ground level, it is not efficient. Maybe we need our Eric Schmidt reign period.

Yes, four years ago we beat Microsoft when everyone said Windows Mobile with Direct Push in Exchange would kill us. It didn’t… in fact we grew stronger.

However, overconfidence clouds good decision-making. We missed not boldly reacting to the threat of iPhone when we saw it in January over four years ago. We laughed and said they are trying to put a computer on a phone, that it won’t work. We should have made the QNX-like transition then. We are now 3-4 years too late. That is the painful truth… it was a major strategic oversight and we know who is responsible.

Jim, in referring to our current transition recently said: “No other technology company other than Apple has successfully transitioned their platform. It’s almost never done, and it’s way harder than you realize. This transition is where tech companies go to die.”

To avoid this death, perhaps it is time to seriously consider a new, fresh thinking, experienced CEO. There is no shame in no longer being a CEO. Mike, you could focus on innovation. Jim, you could focus on our carriers/customers… They are our lifeblood.

8) Democratise. Engage and interact with your employees — please!

Reach out to all employees asking them on how we can make RIM better. Encourage input from ground-level teams–without repercussions–to seek out honest feedback and really absorb it.

Lastly, we’re all reading the news and many are extremely nervous, especially when we see people get fired. We need an injection of confidence: share your strategy and ask us for support. The headhunters have already started circling and we are at risk of losing our best people.

Now would be a great time to internally re-brand and re-energize the workplace. For example, rename the company to just “BlackBerry” to signify our new focus on one QNX product line. We should also address issues surrounding making RIM an enjoyable workplace. Some of our offices feel like Soviet-era government workplaces.

The timing is perfect to seriously evaluate at our position and make these major changes. We can do it!