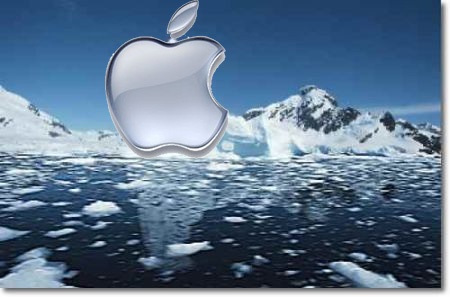 From quirky outsider with beautiful machines to market-dominating empire with a reputation for spoiling the fun, the story of Apple is one of global success but in do the seeds of their destruction lie in the domination?

Laura Scott is a Digital Strategist/Creative at Addiction, life-long Apple fan who has just switched to an Android phone.

We’re not going to lie, she also writes for ShinyShiny, that’s because we think she’s good. Which is why we interviewed her. Her work with brands gives her a sharp eye for perception for what’s hot and cold.

Like us, she was surprised by the revelation that Apple are looking into banning iPhones from filming at live events. [The story was revealed after Apple took out a patent on the camera-crippling technology, provoking popstars including Tinie Tempah to speak out against it.]

We had a chat about Apple, the brand.

SS: So, Laura, you’re a big Apple fan, why do you think the tide is turning against the brand?

My background is with Apple, I’ve used them since primary school and part of the appeal is that they’ve always positioned themselves as the creative’s computer.

But with this camera-stopping software, you are limiting people’s creative expression. Not just what they can read or access. With that they risk alienating a really important segment of their audience and they can’t risk losing them.

SS: But geeks have complained about Apple’s nannying control for ages. Isn’t this just more of the same?

I think things have shifted in the past 2-3 years. There have probably been articles for the past several years saying “oh Apple has lost its cool”. But I do think there has been a change recently.

Just on the brand: the iPad has been sold as a businessman’s plaything. If you look at the advertisements for it, it’s well-dressed business people in suits. Compare them to the early iPod ones and it’s young people dancing around – you can really see a shift in how they position their brand.

SS: But the products are still really great

Of course. But the big launch with the iPad 2 was a magnetic cover. You know? Great – they’ve stuck some magnets in a bit of fabric. Of course with the iPhone and the app store they brought in some completely new products but since then, what’s been really new.

It does make sense to grow your products with your audience, maybe I am a headless corporate now and maybe that’s who they should be targeting. But this filming-on-iPhone ban shows something worrying – that Apple are starting to forget about the younger generation.

If you told my brother who is 18 years old that he can’t go to a gig and film it on his phone, he’s not going to get that phone.

I mean, maybe people should just listen to the music at gigs, but that’s a different argument.

Apple shouldn’t be involved with when and where you can film stuff on your iPhone.

First of it was with Flash – where Apple banned it from their platforms. Then people started getting their apps removed from the app store for ridiculous reasons. This is another step in that direction.

Then there’s also their policy of Planned Obsolescence – which I understand but I’m still using a Mac from 2004 which I love. It’s not right if computer products are only going to last 2-3 years. One reason I didn’t buy a Dell was that they didn’t last nearly as long.

But now I could buy a Dell for a fraction of the price and it would last the same amount of time.

SS: Do you foresee a sudden fall from favour?

No, I think it will be more of a tail-off: they have such a huge following. Personally I’m still very loyal to Mac computers, but I don’t regret ditching my iPhone for an Android. But still – there is no very strong competitor there – unless Google really start to focus more on hardware…