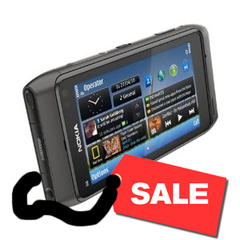 Nokia will cut the prices of their top handsets by 15% according to a report from Reuters. The flagship N8, the multimedia C7 and the business user-targeted E6 could all get signficantly cheaper in the next few weeks

The company are undergoing serious changes to bolster their diving market share. A deal with Windows Phone is one of them, this price cut is another. And one with more immediate effects for the consumer. Well ones in Europe anyway.

With attractive deals available on sim-only contracts, it makes a Nokia smartphone an economic option.

For example – the Nokia N8 currently costs £300 at Amazon, the cut would bring it down to £255, a significant saving.

A price war would be very much in the consumer’s interests. Competitors like Samsung, LG and HTC – makers of top and mid-range Android phones are likely to be hit the hardest by this kind of aggressive price-cutting.