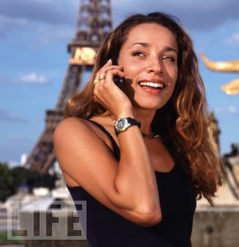 Good news for holiday-makers – the cost of phone calls between European countries could be sliced under a new law aiming to make call charges fairer for consumers.

Phone carriers slap on heavy charges for mobile use in different countries, even when they are same network.

The European Commission wants to change that by putting price caps on “roaming” costs. It would make everything cheaper from receiving or making calls, sending text messages or downloading data when travelling in Europe.

The Commission recently capped the maximum phone bills that could be charged by a European carrier to 70 euros. This effort to cap price per minute would go further:

“Current EU roaming price caps will expire at the end of June 2012. The authorities fear that without putting more plans in place, prices could pick up to pre-2007 levels.

“There is currently no cap per megabyte on downloading data, but this would be limited to 50 cents (45p) per megabyte by July 2014, under the Commission’s plans.”

Good news for everybody. We hope that the legislation gets through.