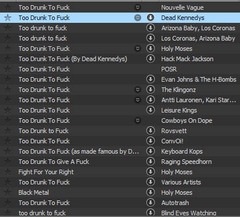 Spotify have censored an advert running on their music service that used the song “Too Drunk to Fuck” because it “encourages binge drinking”.

The ad was for Kronenbourg and featured the song from The Kennedy’s playing in the background. No other albums or song titles are censored and they pretty much cover the gamut of bad words. And, as everyone has pointed out – it really doesn’t encourage binge drinking. The contrary in fact.

However alcohol pressure group Portmans said it breached a rule that bans advertisers from “encouraging irresponsible or immoderate drinking”.

You can listen to the track normally though. Just not in the context of Kronenbourg sales.

Censorship has come up with Spotify before – they reserve the right to take down playlists with offensive or defamatory names: see No rude Playlist names say Spotify