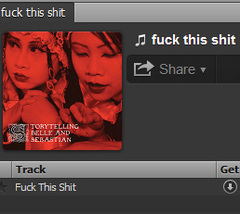 Seems like some people have been thinking up rude names for their playlists on Spotify: as the music service has gone so far to explicitly ban it in their new End User Agreement. The document states that you can be withdrawn from Spotify Social if you are found to be writing rude things.

“Examples of unacceptable behaviour include, but are not limited to:
giving playlists offensive, abusive, defamatory, pornographic or obscene titles;”
[section 11]

I wonder what people were doing? In the interest of investigation I just made a playlist called “Fuck this Shit”. That seemed to be fine. Plus lots of songs have really rude names so I guess the bar will have to be set pretty low…

Anyone been blocked for these reasons?

Related: The cut to Spotify Free makes the service worse for paying users too