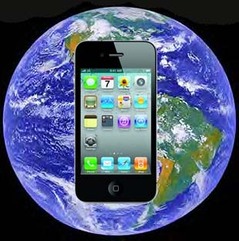 It’s not just big, it’s the biggest, despite being one of the most expensive phones on sale. We all know Steve and Apple have pulled off an incredible success with the iPhone but seeing the cold hard facts is still a gob-stopper.

Between April and the beginning of July this year – 20.34 million iPhones were sold.

They’ve overtaken Nokia as the biggest seller of smartphones at last and with almost incredibly with only one device.

Techies may scoff at the salesman tactics like bringing out a white version of the iPhone 4, but hey, look like it worked. It’s not all about pleasing the gadget bloggers, it’s about making your handset the most desirable one out there. And looks like they did it.

Let’s hope for the sake of healthy competition that Android-makers, even Nokia and Windows manage to come up with a true rival.

Here is Apple’s summary of devices sold – note that iPods have dipped. Everything else is increasing fast.