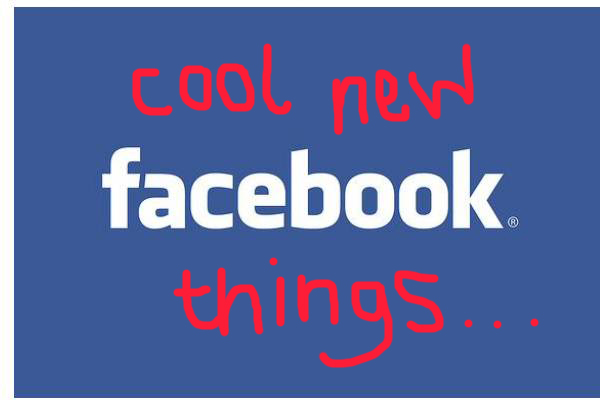 Well isn’t Facebook a funny creature? Sometimes it likes to shout about its shiny new looks, features and profiles and other times it sneakily rolls out changes under the radar for us to either completely ignore or get unnecessarily angry about months later.

Recently we’ve noticed a few new changes that could have a big impact on the way we use the social network. Some of these features have been well publicised, but others seem to have slipped through the social media net.

So here are 10 cool new features that you may or may not have noticed, including silly, subtle, handy and annoying tweaks.

Earlier in the week the social network quietly swapped the email addresses displayed on our timelines with a new @facebook.com one. As you’d expect, users have been a bit angry about the changes, especially as we already have work and personal email addresses and ABSOLUTELY no need for another.

We weren’t at all surprised that Facebook made the changes without telling us, but according to a statement from a Facebook spokesperson published on All Facebook, we’ve been kept informed at all times:

“As we announced back in April, we’ve been updating addresses on Facebook to make them consistent across our site.

“In addition to everyone receiving an address, we’re also rolling out a new setting that gives people the choice to decide which addresses they want to show on their timelines.

“Ever since the launch of timeline, people have had the ability to control what posts they want to show or hide on their own timelines, and today we’re extending that to other information they post, starting with the Facebook address.”

The @facebook.com email address basically allows people who aren’t on the site to message you, so you never EVER have to leave in order to check your emails elsewhere. Sneaky yet clever, huh?

To get rid of your @facebook.com email address from your profile go to your Timeline, click on About, scroll down to Contact Info, click Edit and play around to choose what you’d like to display yourself.

Apparently the translation feature has been around on Facebook pages for months, but we’ve only just noticed that it’s rolled out to personal profiles too here at Shiny Media HQ.

The social network has teamed up with Bing in order to provide you with a Translate link, which you’ll see under any comment or status that isn’t in your first language. You simply click the link and a translation will pop up in the place of the original update or comment. Genius.

According to Mashable when the feature first came to pages bilingual users were able to add their own translations too:

“The feature lets bilingual users enter a human (and often more accurate) translation in that pop-out window. If enough other users vote positively on the accuracy of a human translation, it will replace the one from Bing each time the Translate button is clicked. The human translations can be managed by page administrators using a “manage translations” link underneath posts on pages they manage.”

If you’re an admin on a Facebook page, next time you visit it you’ll probably notice a new tab in the menu bar called “Voice”. This tab reminds you that you’ll be liking, commenting and interacting as the page and not yourself, it even gives you the option to become you again too.

This is a pretty subtle change, but it’s presumably been added to stop users from getting confused about whether they’re engaging as themselves or a page. It sounds like even a monkey would be able to do that, but if you’re an admin on multiple pages and haven’t had enough coffee, it’s an easy mistake to make.

This means that you’ll be able to follow a certain person’s activity from within an application (even if you’re not friends with them) and it’ll show up in your news feed.

However, don’t worry that every Tom, Dick and Harry will be able to see your runs or stalk the films you watched today, you still have complete control over who sees what you publish through the privacy settings of the apps in question. For now anyway.

The long-awaited edit comments feature is slowly being rolled out to all users right now, allowing you to make edits to anything you’ve written in the past under an update or photo. Just be aware that anyone can see the history of what you’ve amended.

Facebook has added a teeny tiny megaphone symbol next to its Sponsored Ads sections, which takes users to a page explaining why they see ads and best practice tips for brand managers.

This may seem really insignificant and most users probably won’t even notice the new icon, but it’s good to see the social network being as open as possible about its use of advertising across the site.

Instagram rolled out its latest update this week and one of the biggest features is much deeper Facebook integration.

By going to YOU within Instagram (we’re not sure why it’s shouting at us either) and clicking Sharing Settings then Facebook you can make likes visible on your timeline (this means photos you’ve liked and those who’ve liked yours) and also change your default settings so everything you snap is sent directly to Facebook without the hassle of ticking that little box. Because we all know how hard that is.

If you’re an admin for any pages on Facebook you’ll want to download the Pages app, which gives you complete control over them while you’re on the move.

You can download the app for free from iTunes.

9. Facebook Camera or just Camera (with a dot) app

Another Facebook app that’s had everyone talking over the past month or so is Facebook Camera, or just Camera, or Camera with a dot that we can’t find on the keyboard right now.

It’s a slick application which allows you to take, edit, add filters and share photos with your Facebook friends. Did we mention filters?!

You can read our full review of the Facebook Camera app or download the app for free from iTunes.

And last but not least, you can now add silly emoticons into your Facebook chats for pre-teen style flirting. Just what we were after.

Have you noticed anything else over the past few months?