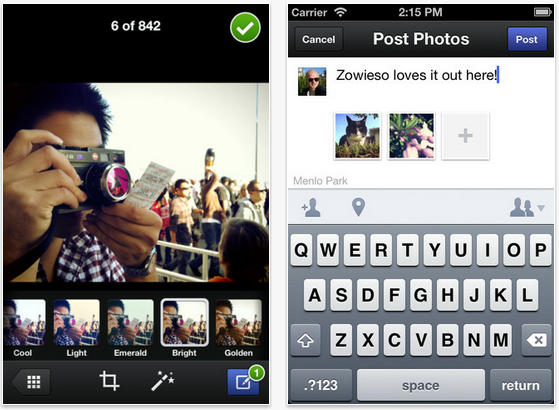 Facebook has FINALLY created its own photo app, but will it be able to compete with Instagram or even… shock horror… kill it off completely?

After a lot of speculation over the past year or so, Facebook has finally introduced its own photo application, called simply Facebook Camera or just Camera according to the official blurb on the app store. How arrogant.

If you’re a little too excited and can’t even read on without downloading it for yourself, then head over to the app store now to try it out for free…

When you first start using Facebook Camera you’ll notice that the interface is a little different in comparison to the likes of Instagram. There’s a news feed of all your friend’s photos (and the option to switch to just yours) and nothing else. These are photos they’ve taken, been tagged in and even snaps uploaded from Instagram.

A scrolling news feed is normal, however, the main difference is that you can see a sneak preview of the photos in your Camera Roll at the top of the screen, so pull down that preview and there you have all of the photos you’ve ever taken.

To get started with an image you can either take one from within the app by pressing the camera icon, or choose one that you’ve already taken from your Camera Roll.

Tap on the photo you want to play around with and it blows up to full screen size so you can start editing. Here you can crop your image easily, rotate it and… drum roll please… add a number of filters…

You apply filters just as you would with Instagram, they appear along the bottom of the screen and you scroll along and select one to preview how each will look. There’s a pretty impressive variety of 15, some are a little too similar to one another, but here are a few of our favourites: 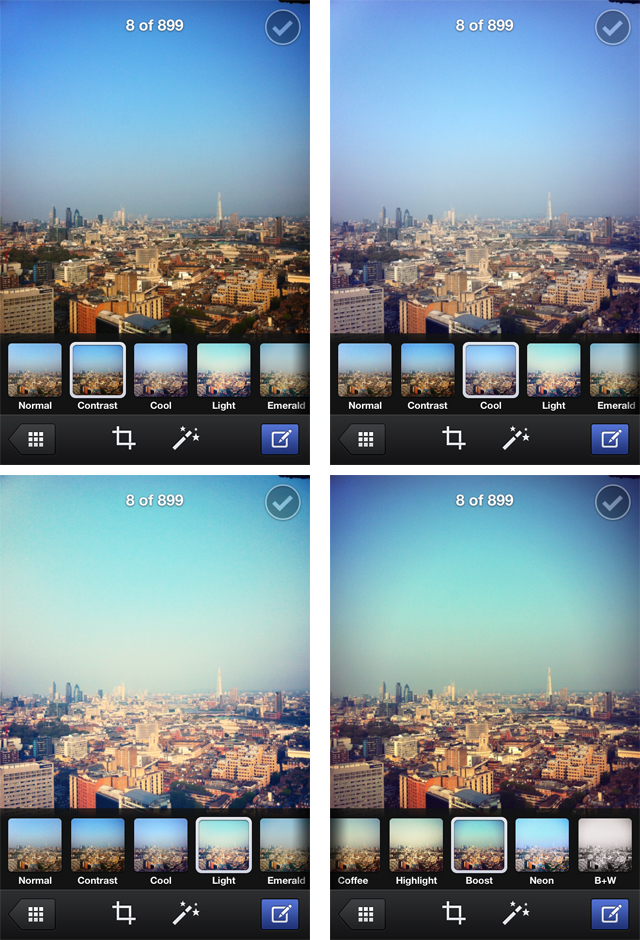 To tag someone in a photo you tap on it and the app can tell where faces are too, which is a feature we love and feel is super intuitive.

To upload your image, click on the tick icon in the top right hand corner and you’re then prompted to post the photo. Here you can add a caption, a location and tag people too, as well as choose who can view it, including Public, Friends or Only Me as well as all of your lists. By putting these privacy settings in such a prominent position, Facebook is cleverly pre-empting any criticism from those who love to whine about everything being automatically set to Public.

Once you’ve uploaded it, it’ll instantly go to your Facebook Timeline and you’re done.

Firstly, there are a few things we prefer about Instagram straight away, like it’s added tilt-shift, borders and lux settings that may come to Facebook Camera one day, but will still keep us loyal for now. We’re also used to Instagram’s interface, so as good as Facebook Camera looks, sometimes we just want to drag our heels and admit we dont like change.

There’s also the fact that (for many users) the Instagram community is different to the one you have on Facebook, where photos are much more about who’s in them and not about quality and good-looking shots.

For now we’re sticking firmly with Instagram, but if you use Facebook a lot and often send your Instagram snaps there anyway, then the new Camera application does cut out the middle man, so we imagine you’ll migrate over to it in time as much as you’d like to admit you won’t.

At the moment there’s no official word about what Facebook plans to do with Instagram now it has such a similar offering. Of course there’s rumours it’ll get shut down over the next year, but who knows. You may think that no one could ever touch the photo god that is Instagram, but its (roughly) 57 million users pale in comparison to Facebook’s 900 million. Watch this space.

Available from the app store for free.