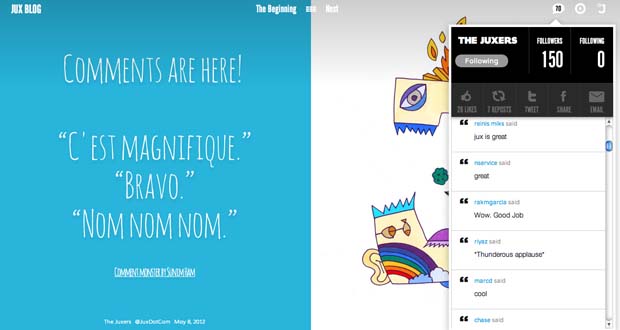 This week Jux, the dark horse of the blogging world, has rolled out a new commenting system to its users.

Big, bold blogging platform Jux may still be in its infancy, but since we first wrote about its potential last year we’ve seen more people using it and more awesome updates being made to the way it works, like the addition of panoramic streetview posts, faster loading times, improvements to the iPad app and much, much more.

Granted commenting systems have always been built into the likes of Blogger and WordPress, but Jux’s biggest competitor, Tumblr, still doesn’t have a default commenting system of its own (although you can add one with the likes of Disqus or Facebook comments). So, this latest feature certainly sets Jux up as a valid contender in the blogging platform arena. Here at Shiny Shiny we’ve always thought it fared well against Tumblr, but for those that were sceptical this should now be proof that Jus is a force to be reckoned with.

Related: The battle of the blogs: Jux vs. Tumblr