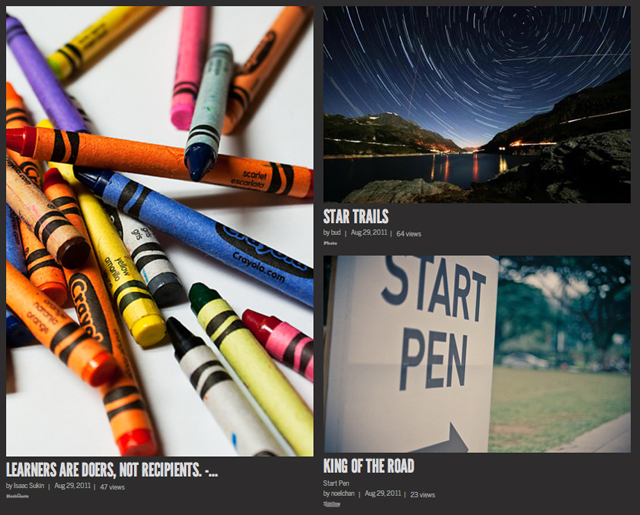 It may well be the focus on images, the simple interface or the lovely lovely layout which has us hooked, but it’s also refreshing to see a platform with such a no-nonsense attitude, as the company’s Twitter bio reads, “100% delicious content. Zero crap.” Nice.

Yes it may well be a flash in the pan, but we’re keen to see how it grows in the next few months and how it compares to our current favourites.

I’m pretty sure that we could put Jux head-to-head with any platform and it’d do well, but it does seem to lend itself to a big showdown with Tumblr, whether it’s the ease of publishing or the grid layout…

One of the main things that strikes us about Jux is just how good it looks, with a focus on big, high quality images and juicy bold text. There are also a lot of interesting fonts which you can play around with, which we haven’t come across before. But, it’s not just how the finished product looks, even when you’re uploading content everything is slick and well thought out.

Tumblr can look very good, but sometimes you have to play around with the different themes until you get it just right. Once you’ve got the right kind of theme and a bit of customisation you’d certainly be able to recreate the Jux look too, which is why this really has to be a tie.

Tumblr’s main interface is very simple and one of its key selling points, just choose what kind of content you want to publish and it’ll go ahead and sort the rest out for you.

Jux can be a little slow when it comes to uploading larger files, but you can customise each post with photo effects, fonts and colours with the help of a very simple little menu bar which pops up at the side. This makes a welcome change from the usual layout, which consists of a bar along the top to tweak things, a pop-up at the side somehow just feels more intuitive and easy to navigate quickly.

Although it’s very early days for Jux, at the moment it scores very few points for customisation. Sure you can probably make your content very niche and unique, but there’s only the fonts and colours within separate posts to tweak and nothing when it comes to overall theme and layout.

Tumblr on the other hand can be fully customised, with a range of themes, different reading and writing options, as well as the ability to add your own custom CSS.

Jux’s focus on huge, wide screen images makes it look AMAZING on an ipad or even a mobile device, it’s just the same grid-like layout.

However, depending on what Tumblr theme you’re using, you can be forced to only view a mobile version of your Tumblog and although some themes also look great on an iPad, others just seem a little forced and squashed.

While you’re uploading and tweaking content with Jux you have the option to share it to different social networks. We’ve also noticed that the Jux team tweet about your content too, which admittedly might stop as more and more people sign up to the platform, but it’s good to see them getting involved with the community.

If you play around with your Tumblr settings, you can also share your content instantly with your social networks. It seems there’s a little more control with Jux, but as they essentially do the same thing, let’s call it a tie.

Neither Jux or Tumblr have their own built-in commenting systems, the only thing that sets Tumblr apart is that you can sign up for a Disqus account and integrate comments that way.

It’s hard to draw conclusions about how the Jux community is interacting with one other just yet as it’s just far too new. So obviously Tumblr would win hands down, it’s got a dedicated community, but it’s also got a lot of years under its belt, so watch this space…

Both Tumblr and Jux could arguably be used for all kinds of purposes, but they are undoubtedly heavily focused on image content.

As we’ve mentioned before, you could probably recreate the look and feel of Jux from a Tumblr blog if you tweaked everything a little, but Jux’s ready-made theme with full-screen images has to win. There are also a few different filters that you can apply to your images before you publish them too and we all love a little bit of Lomo action, right?

Another thing which strikes me about Jux is that it can be used for all kinds of purposes, with text posts, quotes, video, photo, etc, but its lovely gallery-like layout and focus on images could certainly make it a favourite among artists and designers looking for a new platform to showcase their work.

And the winner is… Jux!

Yes, we could well be blinded by the sparkly new light of Jux as we’ve always been big fans of Tumblogging, but it’s good to see something a bit new and interesting for a change. AND it may be that we go back to Tumblr after the novelty has worn off and use a theme like Scaffold to recreate a bit of Jux magic, but for now we’re embracing change.

Obviously it all comes down to personal preference and what you want to use the platform for, with its limited customisation tools, Jux wouldn’t do for a blog you need branding or probably a business asset just yet. And sure you can add long, wordy posts but will they be taken seriously? Who knows, but as a place to store your own personal content or curate it from other places quickly, I imagine it’s one of the simplest platforms out there.

it’s clear that Jux is new as there are a few things that need ironing out, like photo uploading time, but we do have high hopes for it. It may not be “the next” Tumblr or even the next big, popular blogging platform, it could well occupy a space with the visual inspiration and content curation services we wrote about earlier in the week, but it’s certainly a great way to store all kinds of content, with its simple and stripped bare interface and focus on big, lovely images.