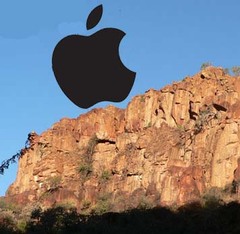 Apple has risen so far so fast that it’s not just negative tech bloggers with too much time on their hands who wonder whether it can possibly sustain the rise. And just how it’s going to cope with the inevitable plateau.

Apple overtook Microsoft to become the most valuable tech company on the stock market last year. And makes profits way ahead of Google or any other tech competitor. It was the outsider that sky-rocketed to mainstream success.

We’ve already looked at how Apple is adjusting to the cultural changes that come from now being the dominant tech company: Is Apple losing its cool? Why the ban on live gig recording could be one step too far….

Now, still chewing the fat on Apple’s frankly incredible Quarter 3 results, it’s interesting to look at the financial aspects too.

The FT just have. They reckon that the picture isn’t as burning bright as it might be:

“Because the good times have made the company vast by any standard (it is expected to have more than $100bn in revenue this year) the question is how much, not if, growth is going to decelerate in coming quarters. When the company reports, later on Tuesday – and for several more quarters to come – investors should be alert for any clues about how management will handle this transition from absurd to merely exceptional growth.”

Apple make so much money by inventing new markets, that some financial experts have cast doubt on their ability to maintain their profits in open mature markets.

The FT again, different blog post, noted that share prices only rose a modest 5% on the back of the spectacular Q3 results.

“What Apple’s products and growth show is that the company actually innovates, creating markets rather than fighting for share. That means the bosses, despite their string of successes, might themselves have only a limited view of the financial future and so have few options besides caution. The issue is not disclosure, but the nature of real technological change.”

In other words, is their incredible technical innovation sustainable? Techies would argue not, especially given some unimpressive releases like the iPad 2. (See our feelings on the magnetic cover here). But their ability to sell products is unmatched.

And one important market open to Apple doesn’t rely on inventing more swanky new products. One big outside factor in Apple’s continued profitability is itsgrowth in Asia, particularly China. Growth in sales in the US and Europe has been relatively flat, but in Asia Pacific sales are up 57%. That’s huge, because China is huge.

Apple are well placed to take advantage of the market there, and growth there could fuel Apple’s continued profitability, even if they don’t make any game-changing announcements in the next few years.