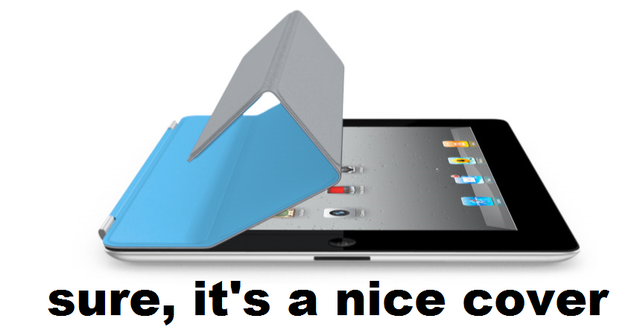 Is it just me or was there something a bit strange about the CEO of the world’s most financially successful consumer technology company spending over five minutes near the start of his keynote presentation telling us about a magnet-enabled blanket?

“It’s not a case, it’s a cover and it’s not just a cover, it’s a smart cover” Steve said with the weighty demeanor of a man touched by the hand of history, but really, where was the wow-factor? Let’s face it. This was just a clicky blanket.

I have to say that a lot of that hour long presentation was devoted to apps too. Great apps yes, certainly, but are two apps the best thing that the mighty Apple can come up with? Small companies make great apps. Apple overtook Microsoft this year as the most highly valued tech company on the stock exchange. Video and music editing software already exists! Why aren’t they thinking bigger?

Oh yes then there was also the fact that the iPad 2 would come in white too. Cute yes, but hardly a break-through in technology.

I am moaning. Sure Apple were pushing forward tech in many respects: getting such a good battery that thin is definitely an achievement, having a screen sensitive enough to discern how hard you touch the screen and adjusting a sound produced accordingly – that’s kind of beautiful. And well, the new chip looks nice – and is obviously tuned really sweetly to user interface. Though I have seen 1.2GHz dual core chips before. Don’t mention cameras. They have been around on mobile devices since the 90s.

Was this focus on two apps, a case and a colour change an example of the famous Apple attention to detail or was it just a lack of big new ideas?

Apple’s thing has often been to take an existing idea (tablet computers/personal music players) and make a million little tweaks that make a good idea into a good product.

But still – we need to see more innovation here, I liked it, but I wasn’t gasping. Except at some of the Apple team’s hilarious lines: my current favourites from my notes from the night –

“we haven’t invented a cure for autism, but -” (apple video)
“It’s been I define a miracle as something that comes in and changes your life in a way you think could never happen.” (apple video)
“You won’t believe it! it uses magnets” (steve)

Come on. Apple – where next?! lead us somewhere exciting!