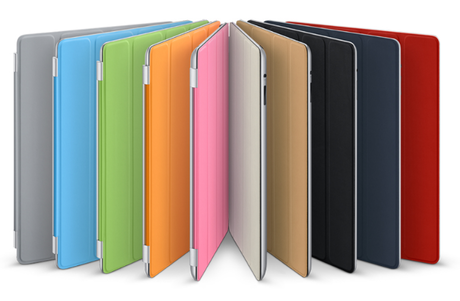 Over the years since the launch of the iPhone and the iPad a whole ecosystem of cute little cases and stickers has sprung up to cover the svelte outlines of the Apple gadgets. Whether the case are to protect the devices, customise them or – in the case of the iPhone 4 – improve the antennae reception, Apple has always encouraged cases.

But last night at the launch of the iPad 2 Steve Jobs spent a good five minutes telling us about a new own-brand Apple-made cover for the iPad 2: the Smart Cover. It has magnets. In fact it does lots of fancy stuff:

With its magnets the Smart Cover automatically grips the iPad and wakes it up when you open it. A microfilm on the inside cleans the screen when you cover it up, it pulls off easily and can fold back behind it to make a little triangular stand, using the magnetic side clips as a kind of hinge. It comes in 5 colours, and is available in either leather ($69) or polyurethane ($29).

Apple has made its own iPhone and iPad cases before which it sells through the Apple Store (usually for a tidy sum), but that hasn’t put other companies off making different ones.

This time round though the Apple Smart Cover has a huge advantage in that it got about five minutes advertising time on one of the most watched tech broadcasts of the year.

Still – I think the market will continue strong – if Apple really intend to sell 30 million of these things, then there will be people who will want something a bit different to customise their iPad. And not just in a different colour. For starters there is some functionality missing from the Smart Cover – it’s a cover not a case… so while it will protect the screen from scratches, it won’t protect the edges if you drop the thing. Some people will want to put something a bit more rugged between their iPad and the world.

There will also be people who don’t want to pay $29 for some plastic, however clicky and magnetic it is. So cheaper

And hey people like to personalise – I’m sure we’ll see fashion and designer cases enjoying healthy sales as people give their device a more personal stamp.