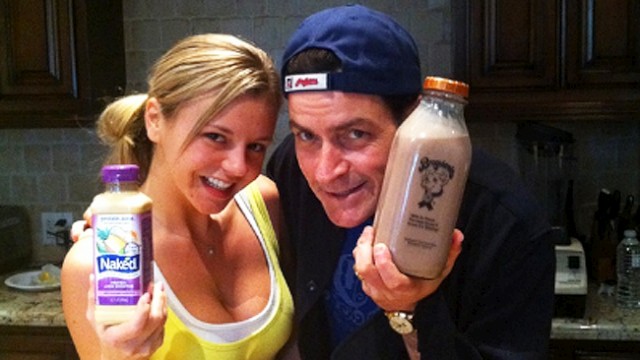 Self-proclaimed “winner” Charlie Sheen managed to get himself a Guinness World Record for getting to one million Twitter followers within days of joining – and that was without saying anything.

It took Sheen just 25 hours and 17 minutes to reach a million followers after joining Twitter on 1 March, and the world has spent days waiting with baited breath for the troubled actor to open his mouth. But now that he has, we’re sort of wishing he hadn’t; apparently Sheen joined Twitter as it’s a “cash cow”.

Sheen has signed a deal to deliver product advertising on Twitter, according to the New York Post, and has already started posting pictures of himself holding things, presumably for money.

But we’re too clever to fall for such tactics, aren’t we? … Apparently not. After Sheen posted the picture above, the California dairy making the chocolate milk in question was inundated with calls from potential customers.

“Born Small… Now Huge… Winning… Bring it..!”, Sheen has written as his Twitter description, not entirely unfounded, it seems, judging from the responses. But at least the actor is not devoid of humour, having added one last phrase: “Unemployed winner…”.

One thought on “Charlie Sheen takes his winning attitude to Twitter”