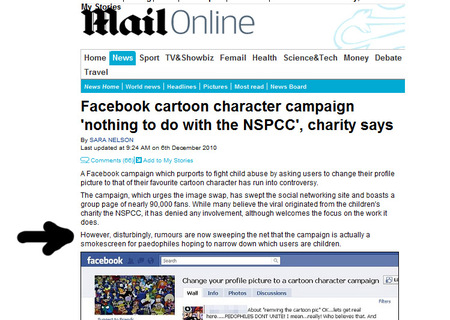 Well I thought I understood this ‘change your facebook avatar to a picture of a cartoon to help raise awareness of child abuse’ thing.

I thought I did.

I thought – “well that sounds a bit lame but well-meaning”. But the whole thing has descended into a maelstrom of conspiracy theories and accusations of paedophilia, fuelled mostly by one crazy but brilliant article on the Daily Mail. Really, who needs the Onion to spoof this stuff when the real newpapers are printing such wacko stories to start with..?

The best lines are:

“disturbingly, rumours are now sweeping the net that the campaign is actually a smokescreen for paedophiles hoping to narrow down which users are children.”

“But one Facebooker asked: ‘How is this gonna help stop child abuse? Sounds like something a paedophile would do!'”

Uh does that sound like Brass Eye or what?

Basically, it seems that this profile changing idea was not in fact started by the NSPCC, the children’s charity. It wasn’t started by any children’s institution at all. That is a fact. It was, according to a comment on Mashable just a thing to get people to change their pictures to something from their childhood for no particular reason. Then, someone sort of hijacked the idea to raise awareness of child abuse.

The Facebook page which has inspired profile picture changes across the world read:

“Until Monday (Dec. 6), there should be no human faces on Facebook but an invasion of memories. This is for eliminating violence against children”. The campaign creator asks Facebookers and share the above statement in their status.”

So we still don’t know who started it or why. The slightly clumsy grammar suggests it’s not backed by an organisation or social media agency who presumably would sharpen this stuff up. But do we really think it’s an elaborate bluff by hardened paedophiles to determine the age of people on Facebook? – something that could be guessed from a normal profile picture and anybody’s basic information..? well the Mail do anyway.

Let’s leave it there.

On a related note, someone has spoofed up a hilarious CNN page on the same topic: a little jab at those people who think Facebook groups can change the world..The first line reads: “Authorities around the world were stunned this morning by the sudden and inexplicable absence of child abuse anywhere in the world..” 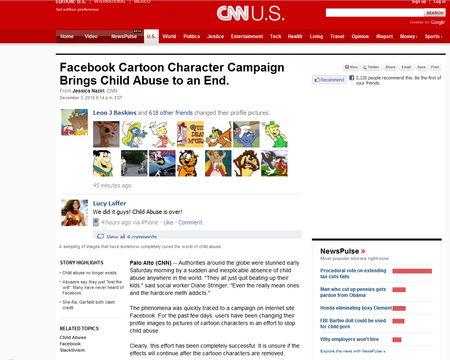 The Crazy Story of Digital Highs & why MP3 files really aren’t drugs
and The Daily Mail v Facebook tussle continues, the Mail on why Facebook is a toxic drug