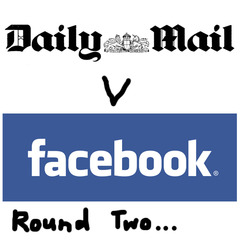 You don’t go to the Daily Mail’s Femail section for insightful comment about web trends and social networking. No, you usually go there because there’s a headline saying that Facebook is like mephedrone combined with lesbians and destroying Britain/young lives/society – you know.

Then you read the article, boggle for a little bit and may leave an ironic link on Twitter. But anyway, I couldn’t help picking out a few choice phrases from this article I believe Facebook is a toxic addiction by Janet Street-Porter, which shows the continuing war of words between the British newspaper and the American social networking site.

Facebook recently got one over on the Daily Mail, who had to apologise to the social networking site for an article that claimed that whenever a “14 year old girl” joins Facebook she is approached by older men within seconds, who want to perform a “sex act in front of them”, see story here.

The Mail sort of runs over some familiar territory here:
“Social networking isn’t just – as I complained last year – a pointless waste of time, because for a worrying number of young people it is proving to be harmful, if not deadly.

“Going online to chat is like taking crack. It’s so addictive, you soon find yourself constantly tweeting, texting, messaging, emailing. Mostly harmless bilge, but for vulnerable teenagers it’s a drug that can end in death.”

What she’s referring to is a tragic case in Britain where a teenage girl met up with a man she had encountered on Facebook posing under a false identity, resulting in her murder, story here.

The old rule – don’t meet strangers off the internet by yourself – stands, but to blame Facebook for the actions of a psychopathic human is as silly as blaming the makers of the car the man used to get there. They all enabled this to happen, but didn’t cause it. It doesn’t make it the internet equivalent of heroin – dangerous in itself.

In the end, it’s a relatively balanced piece with a souped-up out headline. At the end of the article, Street-Porter threatens that the older generation will start to join Facebook too. We look forward to adding Janet Street-Porter as a friend whenever she starts taking up this toxic drug.