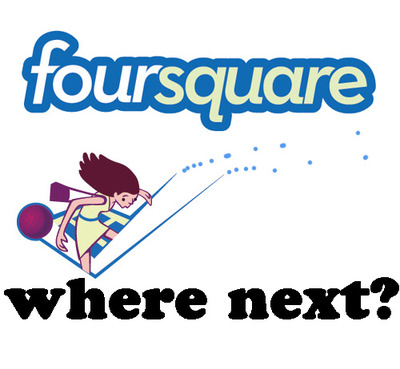 A pioneer in the red-hot field of location, Foursquare’s smart little location-based gaming app caught everyone’s attention last year and got geeks all hot and bothered. The technorati were scrabbling to check in to their local supermarket in ever-escalating battles to become mayor of their branch of Tescos.

Foursquare married a cool new technology – GPS-locators on phones with a fun social gaming aspect. A year ago it was everyone’s hot tech tip, but over the past 6 months Foursquare seems to have lost its mojo.

I think we can pinpoint four reasons….

ONE: Facebook
Three months ago Facebook introduced its Places function, copied Foursquare’s format and “check-in” idea and opened it up to all users of their iPhone app. It’s now on Blackberry too and should be arriving on Android anytime now. Commenters read it as a death blow to Foursquare. Even Google struggles to compete with Facebook and it’s almost impossible for small start-up to do so.

Sure there isn’t the gaming element in Facebook Places, but the huge membership of Facebook means that almost anything they do is bound to be a success.

There’s not much Foursquare can do about that. Facebook recognised a good idea when they saw one and copied it. I guess Foursquare should start looking for ways to distinguish themselves from Facebook Places and doing things that Facebook can’t do, before they lose their fanbase.

TWO: Gaming is not Enough
The check-in system in Foursquare is cute, and the gaming element where you get badges according to the number of check-ins is fun for a while. But I found at least that it just wasn’t sticky enough. When designing an app for adults you need something more incentivising than a “virtual badge” or a competition to be mayor of a place. Once you’ve checked into Tescos 254 times, you start to wonder why you should keep doing it ad infinitum. The gaming just isn’t sticky enough – people play games for a month or two, but they will come back to Facebook day after day for years.

THREE: Failure to get brands on board
Giving FourSquarers freebies and deals was a great idea for rewarding users and getting them checking in time after time. It could have reboosted interest just as people got tired of collecting badges. The problem is that Foursquare just didn’t push this hard enough or fast enough. Gestures were made by Foursquare towards getting brands and shops on board. Some deals were cut – Mayors of Starbucks outlets got free lattes – but there needed to be more deals and better deals. Foursquare should have been doing something like Groupon – striking some hard bargains with shops and getting eye-catching deals for their users. The vouchers or freebies on offer aren’t yet a compelling reason to use Foursquare.

FOUR: Foursquare just didn’t get Social quite right
I felt Foursquare never quite hit the mark with the social thing. You could add people as friends.. and get tips and push notifications from them if you were in the same area, but the main interaction with other people was engaging in competitive check-in battles for mayoral supremacy. Sure it appealed to some people, but compared to all the creative interaction and feedback you get on Twitter and Facebook, it just felt a little flat.

Also.. where Facebook tends to reinforce and strengthen real world socialising (you get invited to events there, then memorialise the events after with photos and videos), Foursquare seemed to get in the way of it. See posts like Why Foursquare makes You Sad for one man’s complaint about how checking in on Foursquare got in the way of greeting friends and wound up being really anti-social.

If these things improve – Foursquare definitely does have a future, it’s a great app and at the tender age of two years, these guys are the veterans of social location. The field is only going to grow and that expertise is invaluable.

Related: The dark side of FourSquare #1: Mayor Rage : Shiny Shiny