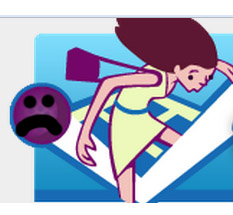 Does FourSquare make you sad? The perennial complaint about the internet is that it cuts us off from the Real World and makes us into goggle-eyed wifi addicts who think that our Facebook friends are our real friends.

There was some suggestion around the launch of new location-based apps that they would bring you closer to the real physical world. Foursquare positively encourages you into the streets and pubs, and social networks pinned to places like Qype and Yelp are all based around going out and socialising.

But no, says Adam Greenfield author of Everyware: the dawning age of ubiquitous computing in an interview on ReadWriteWeb, these apps are even WORSE.

He talks us through his experience with Foursquare: the inital thrill and enjoyment of becoming mayor of the local was followed by the swift realisation that “checking into a venue” as soon he entered a pub/bar or social occasion meant he was spending the first few minutes of every sort of social interaction tapping stuff into his phone rather than talking to his friends or smiling at people.

As RWW put it: “is a mobile location-based app like Foursquare not only anti-social, but also distracting us from enjoying our surroundings because we’re so intent on documenting where we are?”

Ah, the old documentation vs fun debate. It is a hard balance to get right, if nobody’s documenting then there’ll be no facebook album or twitter hashtag and then we’ll all be sorry. Personally I think Greenfield has got a point – I’m a big fan of documenting but I usually do that when there’s nothing else going on… at the bus stop or in the office.

I think Foursquare and similar applications still have really interesting potential uses. Maybe we just need to work out how and when using them is really an advantage and not a distraction. An understanding of social interaction is what has made Facebook great. Other sites would do well to study the psychology as well as the technology of social apps.

Related: Sure, Buzz is good but Facebook still has the Zuckerberg factor and Is technology making us sad :( ?