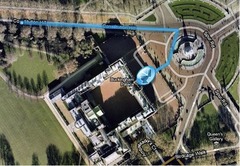 The Flush Tracker, does just as it’s name suggests. By entering in your location the app will show you exactly what happens to your flush once it disappears down the toilet: track its exact position, speed and distance traveled as it navigates the length of Britain’s sewage system. In case that’s not strange enough, you can check out pre-loaded flushes from such eminent postcodes as 10 Downing Street, and we all know a lot of crap comes out of there.

Check out where your flush goes here