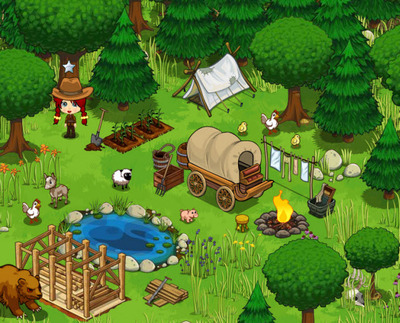 If there was one success story of 2009, it certainly wasn’t Gordon Brown, but Farmville and social game-makers Zynga lay a impressive claim to the title.

Facebook game Farmville has more members than Twitter and became the biggest (most played) game in the world. Pretty huge.

At the highly-publicised launch of the iPhone 4, Steve Jobs paused before the big announcements to talk about “Farming” the iPhone version of Farmville.

So I was surprised to read that Zynga the makers of Farmville and portfolio of other succesful games (Mafia Wars) have lost traffic over the past few months. Since Facebook is growing, I just assumed these games attached to it would grow too, but apparently not.

Venturebeat explain: “Zynga has 216 million monthly active users. But that number is down from 252 million on April 20” stats courtesy of AppData. Here’s a graph of Daily users of Farmville showing a decline over the past month: 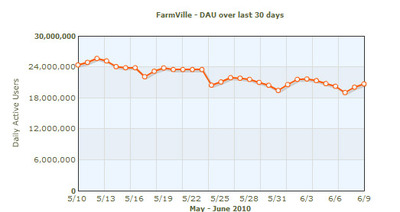 Zynga are making some moves to climb back though through launching the iPhone app and a new game, Frontierville, pictured above.

Since I never fully got the appeal of Farmville in the first place, it’s hard to say why the dip has come about. Any thoughts readers? Do you think people have just got fed up with how time-consuming it is? Are people losing friends by posting too many updates about their crops?

What pray is it? Any ideas welcome in the comments…