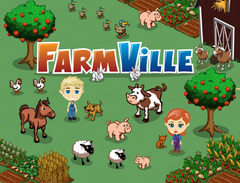 A single Facebook app – Farmville – has more users than all of Twitter. Facebook released some new visitor statistics and yes, as you many expect: they dominate the world, and they weren’t above sliding a quick jibe at their social networking rivals.
“69 million active users are using FarmVille alone, that’s more users than Twitter.” Facebook’s head of Planning told TechRadar.

That’s a lot of virtual strawberries.

The overall Facebook stats are pretty mind-boggling: worldwide Facebook is clocking up 200 billion page views a month, with 350 million users globally logging into the site. On Facebook chat – 1.6 billion messages are sent every single day and 1.4 million photos are uploaded a second.

In the UK Facebook has approximately 23 million unique users a month in the UK, with each of those people logging on spending around 25 minutes on the website a day.
OMG.

Considering that the activity on Twitter is probably of more social significance than the activity on Farmville, there’s no need to get carried away. I don’t think revolutionaries in Iran or plane-crash witnesses or even Daily Mail-watchers are going to turn to Farmville to express themselves.

Anyway, we thought we’d suss out your opinions on this online popularity contest, with a poll:

Related: Why Farmville has became the most popular game in the world