Farmville is a Facebook app that lets you sow, grow and harvest crops. It’s a farming game and recently it became the most popular computer game in the world. Yes: the world. You get a virtual patch of earth, earn money by farming with the option to buy seeds, tools and ornaments if you want. 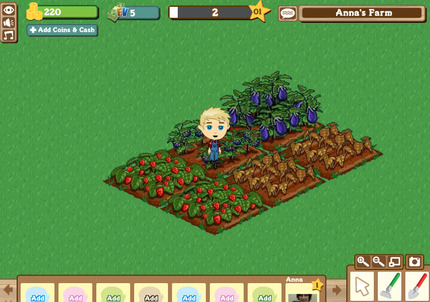 Farmville has got fans – reviews on the app’s profile say: “most addictive game ever!” and variations on “great”, “nice” and “awesome”.

Farmville has got detractors – “amounts to little more than an online chore” says the Guardian and from the Facebook group “Not playing Farmville” come comments like “stare at a wall, it’d be more productive then Farmville” and “annoying when i see a post that says” so and so person just found a lonely cow wandering”. so dumb! be more productive people..” One guy sums up the case of Farmville-haters: “it doesnt teach anything. you plant crap and harvest it thats what the game is.”

Controversy
As well as its fans and detractors, it also got into a little controversy: Zynga the game-makers encourage you to buy game things with real money. Some people (Techcrunch, Guardian) say that’s an exploitation of users who are swapping real money for fake things.

As the Guardian says: “the worry is… that children or vulnerable users may get hooked, and splurge on beautifying their farm while, in material terms, they will be paying for nothing.”

[IMHO: most of the leisure activities we spend money are a bit of a waste: sweets, drinks and those ridiculous stickers that I used to buy as a kid. But of course there’s a psychological difference with buying virtual items, though, lots of people pay for music and apps.]

Farmville is making a few token steps to improve the world as well – by diverting the spending power of their users to charitable causes. You can buy virtual crops that Zynga turn into real food and send to Haiti… according to a recent status post on their fan page.

So why the hell is it so popular?
Farmville has been compared with knitting and well, gardening, but after growing a few patches of strawberries myself and wandering around, what it reminds me of most is tamagotchis – that wild fad in the 90s where everyone bought those palm-sized eggs that hatched virtual creatures which grew and evolved if you cared for them, or died if you didn’t.

To me, Farmville works the same dynamic of calling on your nourishing instinct and then guilt-tripping you. The Tamagotchi effect.

“Howdy Anna! Don’t forget to check in on yer crops, or they’ll wither away and die! Click right on over to FarmVille now! ” is the notification I got 8 minutes after leaving Farmville to do normal Facebook activities. Like the beepings of an under-nourished tamagotchi, it keeps you tuned into its needs and it all deterioriates if you’re not there.

I guess this is what babies, pets and to a lesser extent pot-plants do to you. But do you want to spend that much attention on a computer game? How much spare time do you have?

Also it is quite a peaceful game and vaguely co-operative, so I suppose that’s nice. Then perhaps it appeals to a nostalgia in us urban and suburban creatures for more natural rural times.

Opinions from Twitter
These are what people on Twitter said about Farmville My favourite quote comes from the friend of an addict: @gill_edwards says: “my friend is addicted, he even got up early to ‘farm some rice’ :-)”

Gerald from the office says no: “totally dont get it. And i used to love Harvest Moon http://bit.ly/8N8ORp“– thanks for that Gerald.