Top of the app store this week is iFarm, bringing humble pastoral pursuit to the err “field” of the iPhone. With this free iPhone app you can cultivate potatoes, rice and strawberries in profitable little patches. The only work required is tapping your finger at the right time and some strategic thinking about profits and growth cycles. 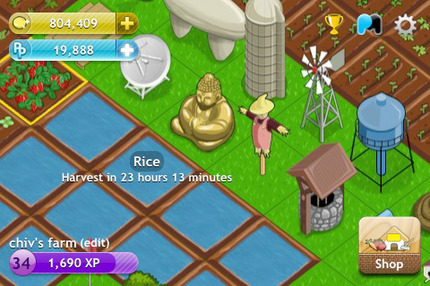 In a mere 24hrs iFarm has jumped into the top 25 ranked apps in the App Store and is currently the most downloaded free app on the platform and the most popular Farm Game.

Clearly farming is what we all want to do on computers: Facebook farming app-game Farmville has become the world’s most popular game, with 65 million monthly active users – that’s 1 in 5 of all Facebook users.

Why? Maybe because it’s quite a soothing sort of game: harvest crops when they are fully grown to earn coins, plow the ground, sow some seeds. I planted loads of strawberries by accident, but even that was still quite soothing.

Designed by PlayMesh, the simple iFarm app is free, though you can buy more complicated versions and also buy online accessories like gnomes, should you so desire them.