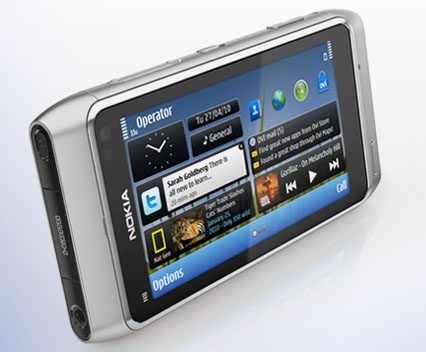 The screen is OLEDmeaning a brighter glow and slimmer form, it also has an ambient light detector for more efficient battery use. It’s a capacitive screen, meaning that users don’t need to click down on the screen to register a touch and comes at a relatively high resolution:

The 12 megapixel camera with Carl Zeiss optics and Xenon flash is a big draw on this phone. Its large sensor that rivals those found in compact digital cameras and allows users to shoot videos in HD as well as actually edit them on the phone using a unique, built-in editing suite.

Running on the Symbian ^3 Operating System it has the Ovi App store onboard and features the main apps built in – email, social networking etc – in up to three different customisable home screens.

Web TV seems to be a feature of this phone, the N8 offers programmes from channels like CNN, E! Entertainment, Paramount and National Geographic, with additional UK focused Web TV content also available from the Ovi Store.

Previous top model the N900 was a slider so this marks a shift into the pretty touchscreen territory for Nokia. I love the camera and video editing programme, and it sounds like an all-round nice device though other reviewers are saying it’s just not special enough to rival top smartphones.

It’s available in five colours see full specs on the Nokia site here
The N8 should be available in UK shops from September with Sim-free handsets costing around £320.