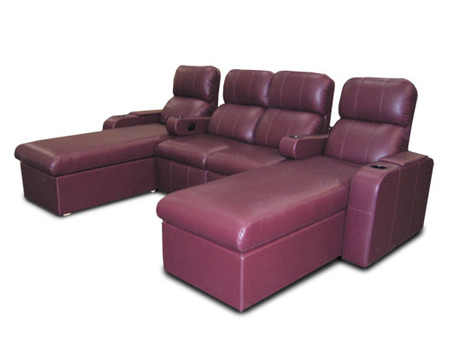 After splashing out on the 3D TV set/projector and elaborate surround sound system, you may be content to just sit on the sofa to watch movies. BUT – if you are fully committed to recreating a classic cinema in your sitting room/attic/garage you should really invest in something plush, leather-covered and built like a tank to rest your butt on.

Perhaps a Fortress chair. Described as “America’s favourite cinema seating brand” (who knew they had one?) the cinema chair brand has just arrived in the UK.

Solid, reclinable and covered in plush red velvet or striped leather, Fortress chairs sound like the sort of thing grumpy old American men would love to sit in while they watch Clint Eastwood films and throw things at the news-reader but anyone who likes a good chair could get into these too. There’s a whole range of different chairs, from rows of fold-up chairs to individual throne-like chairs including “motorised recliners and storage arms with drawers”. There are some gorgeous shots of the most elaborate baroque set-ups imaginable and then some smart modern designs too. 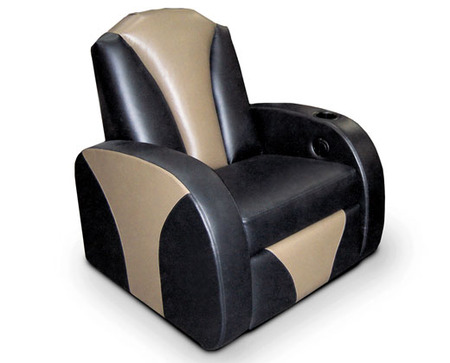 Built rather more like war machines than standard chairs, Fortress seats are made of: “an extremely strong chassis, capable of being modified as required. This build quality is extended to the connectors, which are metal-to-metal – so, no screws – and attach to a commercial-grade steel mechanism.”

No fear of that chair breaking as you rise quickly from your seat to fetch a new packet of crisps.

Even better – they also sell motion chairs that move according to the video being shown: “Chairs can even be specified to include the D-Box Motion System, which provides intelligent and movie-studio-sanctioned movement to match the visuals. D-Box has been used in cinemas throughout the US, and there are now 1000+ Blu-ray and DVD movies coded for motion.”

Excellent. The only catch is the price tag: chairs start at £1,550 and adding D-Box adds another few thousand…