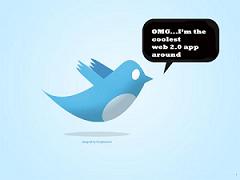 Twitter sure is popular. There’s been a recent spike in Twitter traffic of late, with some saying (namely Hitwise) it’s over taken Digg in the popularity stakes. But does a rise in traffic mean a new bunch of devoted Twitterers? Probably and probably not. As one of the organisers of Twitterval tweeted recently – ‘Only real Twitterers allowed’. ‘Real’ meaning you tweet on a regular basis, not once every blue moon. Or ‘real’ meaning you don’t just set up an account just to follow people (which probably accounts for a chunk of this recent upsurge in traffic).

Narrating snippets of your day into 140 characters, takes a certain amount of dexterity, leaving the waffle for the verbal and giving us short, punchy, in a nutshell style tweets to prompt a few chuckles or shell shockers every now and then (or every hour, whatever).

It probably hasn’t gone unnoticed in the Twittersphere that a few high-profile people, or an assortment of A-Z listers if you will, have joined Twitter, helping to send it soaring into the mainstream. Stephen Fry, Jonathon Ross, Alan Carr, Britney Spears and Ashton Kutcher (see Susi’s definitive celebrities on Twitter list) are among this list. Some of which have mentioned Twitter on their TV shows and personal blogs, which again, probably served to rake in more users (everyone wants to be like a celebrity, right?).

So what else is putting Twitter on the Map? Well the Hudson River plane crash probably had something to do with it for a start, as well as Obama’s inauguration and personal (questionable) Twitter account, which now has a staggering 144,000 followers. Hitwise confirmed the inauguration was one of the main contributing factors of Twitter’s Digg overtake in visits. Whereas Digg gets a lot of its visitors from Google (almost 40 percent), Twitter acquires a lot of its users in other social networks like Facebook, which uses dedicated applications, scoring Twitter well over 100,000 users. Plenty of iPhone Twitter apps are quite popular too.

It’s defined micro-blogging for the masses. Many have tried and failed to compete with Twitter’s micro-blogging prowess, sites such as Plurk, which gave users the option to use emoticons, view message conversations in a linear way and create cliques, so your ‘plurks’ only get distributed to your pre-defined lists. Anyone heard of Plurk now?

Whether it’s surpassed Digg in popularity or not, it is without a doubt, one of the coolest web 2.0 apps on the net right now. Is it going to last? Is the novelty going to wear off? Perhaps… for those who aren’t ‘real’. But the real Twitterers – we’ll still be here, filling you in on what we’ve had for lunch, the goings-on in our office HQ’s, the unpleasant journey we had on the way to work and about those ‘little muddafuckers who tried (and failed) to throw an egg in my car window last night’.

Lucy is the editorial assistant for Shiny and right now her Twitter status reads ‘Ohmygodthisisthebestchilliever! It was well worth the trek’ – and it sooo was.

One thought on “Why twitter is the coolest web 2.0 app on the block”