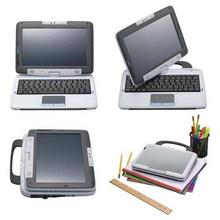 Last year we wowed you with news of the Fizzbook, the first child friendly UMPC for kids that’s pretty much unbreakable (watch this vid if you don’t believe me). Well they’ve just released details of version 2, the snappily titled Fizzbook Spin. Sound a little familiar? Yes, well I know Asus also launchedthe pretty identical looking mini tablet UMPC (the T91), so maybe tablet features are now on trend for netbooks?

They’ve added touch screen capability to the netbook and a couple of hinges, so you’re now looking at a tablet laptop for kids. I’m not sure kids need a tablet laptop, and the price point also makes you wonder why they wouldn’t just opt for the grown up version (i.e. an offering from Advent, HP or Sony), but I guess the fact that it’s ruggedized its a big selling point.

So what else do we have encased with this shell? Well we’ve got an Intel Atom processor, and it runs on Windows OS. They’ve also bundled in the Smartboard SynchronEyes, which is compatible with classrooms which use Smartboards- making the learning process simpler.

The Fizzbook is part of Intel’s line of Classmate Convertible PC’s, and is aimed at helping young children use computers easily, The target age range is 6-14 year olds, which is pretty broad, but this model looks far more ‘laptop’ like than the previous version which resembled a Fisher Price toy.

The Spin runs on XP home and has a 60GB hard drive- quite a step up from the 2GB available in the first Fizzbook. The screen is 8.9 inches as opposed to the original 7, and it has integrated Wi-Fi and an included webcam.

Because it’s a tablet we have couple of extra features such as an accelerometer and stylus included, and it even has a handle so you can carry it handbag style! The motion sensor automatically detects whether you’re using it in portrait or landscape mode and as well as 2 USB ports they’ve also included an SD card reader- one of the first things I check for on any new machine.

On the downside, it’s not light as it weighs in at 1.35kg , but they do include a 4 cell battery, which is equivalent to about 4 hours of juice. It’s been drop tested to ensure it can cope with knocks and bumps and the keyboard is also water resistant (all those Ribena spills).

So what do you think- wonderful for kids or waste of money?