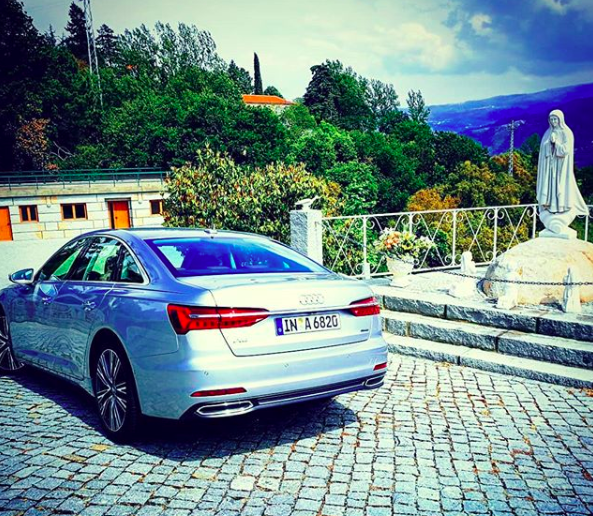 Chris Price heads to Portugal to spend time driving the latest Audi A6 Saloon. His verdict? Not only is it very agile for a big car, it also combines onboard comfort with loads of great technology features…

Driving around the mountainous roads of Portugal’s stunning Douro Valley it’s difficult to believe that I’m behind the wheel of Audi’s latest high end A6 Saloon.

It really does handle very well around the corners, especially as it’s certainly not the narrowest of vehicles and these are some of the narrowest roads we’ve been on in some time (not as if that stops the local white van men from overtaking on blind bends).

But I’m not here to review the A6’s performance. These days it seems expensive, high end cars like this are, to some extent, much of a muchness. Suffice to say it’s big and it’s powerful thanks to a 3 litre petrol (3.0 TFSI) engine that’s capable of reaching speeds of up to 62mph in just over 5 seconds if you can find a bit of road where you can accelerate that fast.

Alternatively there’s a diesel version of this A6 Saloon, the 3.0 TFDI, though we won’t dwell on that as diesel is quite literally a dirty word these days!

Instead what concerns us most here is the car’s onboard technology features. Stuffed to the gills with technology is a phrase I seem to have used very often to describe the latest range of Audis and many other cars besides including those of DS Automobiles which I reviewed earlier in the year here.

But it seems that Audi is one of the front runners when it comes to in-car tech introducing more and more features on its vehicles, many of them only previously available on much higher end models.

Take the latest Audi A6. While outside it looks a little different from its big brother, the Audi A8, inside it boasts many of the same features as the flagship model. Indeed it’s also pretty similar to the Audi A7 Sportback which we reviewed here when we went up to Banbury’s Anyhoe Park a couple of months ago. 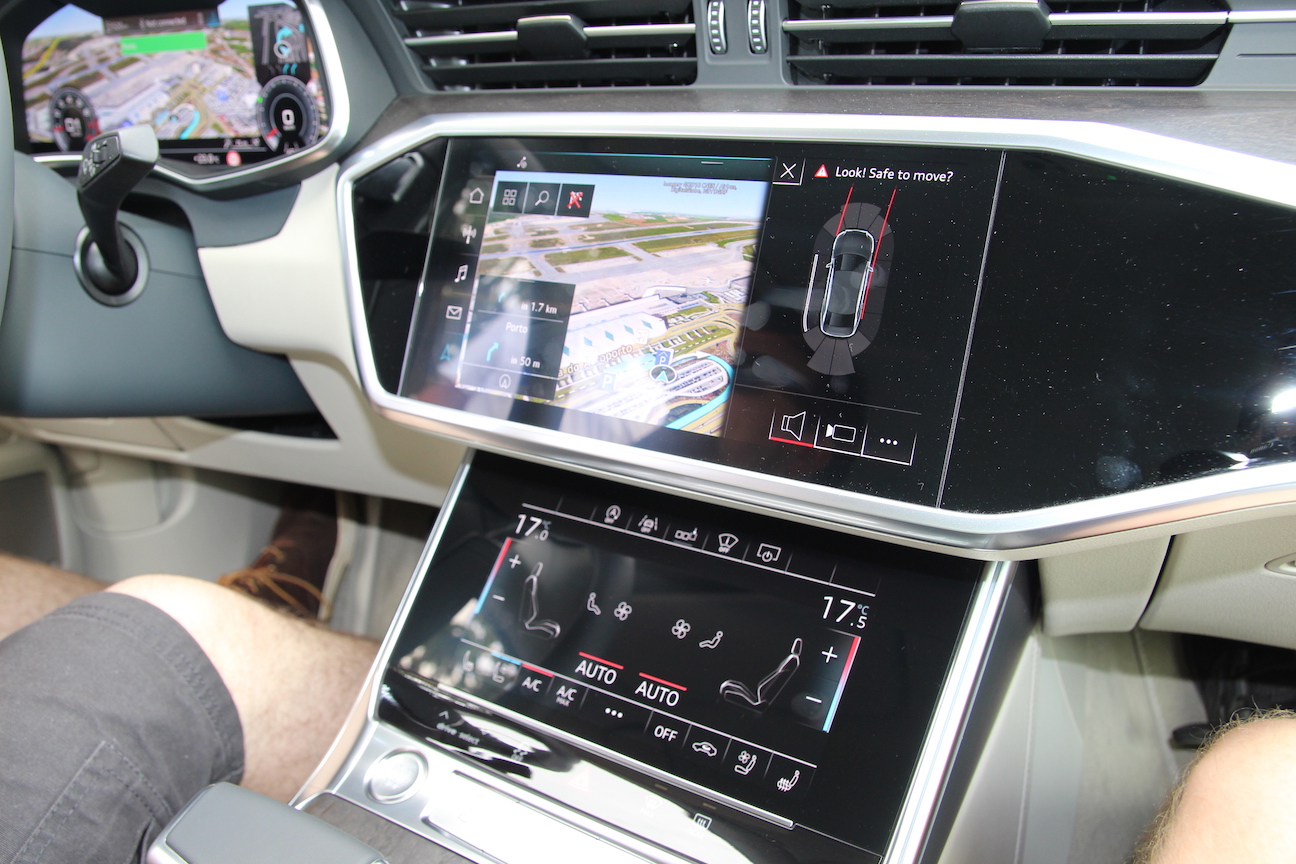 Central to the Audi A6’s in-car tech is the MMI (Multimedia Interface) system. This comprises two touch screens in the centre of the car (pictured above), both with haptic control – in other words when you press a button you get a response so you know you’ve pressed it.

While the lower 8.6inch display is used for seat adjustments and climate control (including heated seat and cooled seat options), the larger 10.1 inch screen above provides all of the options for entertainment, satellite navigation and some of the driver assist features such as reverse parking displays (more of this later).

One optional extra is MMI navigation plus – a 4G media hub – which uses Artificial Intelligence (AI) to offer route guidance based on previously driven routes as well as up to date local traffic information from service provider HERE. It also offers two sound systems including a Bang & Olufsen sound system with 3D sound which provides excellent audio quality.

In addition to touch screen control you can use the lower display as a notepad to handwrite place names, such as the name of an area you want to go to.

An intelligent voice activated system is provided too so you can tell the car you feel cold and it will automatically increase the car’s temperature. And with MMI navigation plus you can even ask the car where you nearest pizza restaurant is and it will come up with a list of suggestions. It’s all very Knight Rider!

Don’t like the layout of the central interface? Don’t worry you can change the options around using the drag and drop system so you can easily put your favourite options first. In fact, up to seven drivers can store their preferred settings in individual user profiles and set up to 400 parameters.

As we have come to expect with high-end cars, wireless charging is provided as standard  for QI enabled phones including the iPhones 8, 8 Plus and 10 as well as the Samsung Galaxy S9 and S9+. Just place the phone in the central compartment and it will automatically charge up. Alternatively USB ports are provided for wired charging.

One of the main bugbears of driving for a lot of people is getting into and out of a parking space. Here the Audi A6 helps in several ways. First of all there are the onboard cameras which display exactly where you are when reversing into a space.

For example using the top 10.1 inch screen it’s possible to see a 360 degree view all around the car (you can even move the image of the car on the touch screen to see if from a particular angle).

Next to this is a computer generated view from above the car which really helps with parking, especially when you are trying to get the vehicle closely aligned to the kerb.

But it doesn’t just stop there. Available later in the year will be the new A6’s garage pilot feature which will allow you to autonomously manoeuvre the car into and out of a parking space or garage without you having to be in the car!

Simply use the myAudi app on your smartphone to guide the car into or out of the space, making sure you hold the relevant function key throughout the manoeuvre. It’s also possible to use an Android smartphone to unlock and lock the car as well as start the engine thanks to NFC technology (this is the same technology that’s used for contactless payments).

Finally, in addition to the parking pilot and the garage pilot which will form part of the forthcoming Parking Pack for the Audi A6, another option which will be available at launch is the Tour package. This offers adaptive cruise assist which keeps the vehicle in lane (on certain roads) and even adjusts your driving style to be more fuel efficient!

Visually there is nothing stunning about the Audi A6. It’s a big, high end saloon intended for the corporate executive. Although clearly an Audi, it doesn’t look as sporty as the Audi 7 Sportback which we reviewed recently or as luxurious as the flagship A8 model.

That said, it’s a very nice car to drive, surprisingly agile for a big vehicle when we drove it around the twisty lanes of Portugal’s stunning Douro Valley near Porto with various driving modes (including sport, dynamic and comfort) helping to add to the driving experience.

And while I don’t like all of the driver assist features which can take any joy out of driving (especially the adaptive cruise control), it does come with a whole host of useful on board technology. The two main touch screen displays are excellent as is the additional ‘cockpit’ display behind the steering wheelwhich can be used to show the satellite navigation system too (a head up display is available too so you never have to take your eyes off the road).

There’s no doubt that cars are both becoming more tech-focused and more automated and Audi is certainly leading the way with vehicles like the brand new A6 Saloon.

Approximate pricing: Prices for the Audi A6 will start at around £38,000 for the 40 TDI Sport model, rising to £47,000 on the road for the 50 TDI Sport, and around £50k for the 50 TDI S line. Produced in Germany at the Neckarsulm Audi facility, the A6 will be available in the UK this summer.