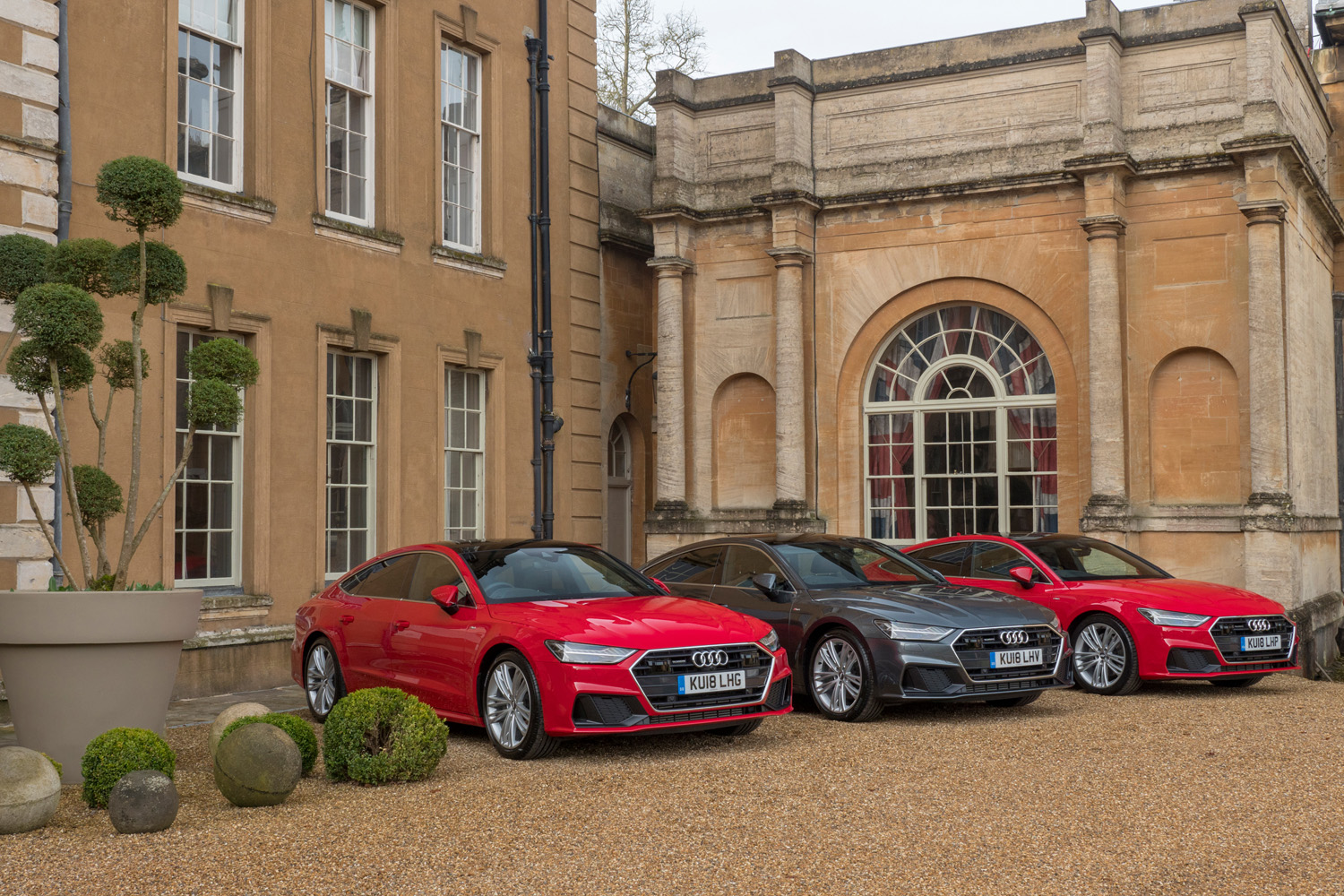 It’s been a long time coming, but Chris Price is impressed by the refined yet sporty looking new Audi A7 as well as its masses of onboard tech

While the style and the sophistication of a coupé, like the beautiful Audi TT, are all very well there are times you need the practicality of a modern 5 door hatchback.

For those who have the money to spend – and we’re talking £50K upwards even for a basic model – the new Audi A7 certainly ticks both boxes. It looks quite sporty thanks in part to the rimless windows, slightly rounded shape and sports suspension which lowers the ride by 10mm. However, it’s big enough for an entire family with plenty of bootspace too.

And while it’s slightly shorter than the previous model which was launched nearly 8 years ago (August 2010) it does in fact have a longer wheelbase than its predecessor. This means there’s a little more room in the cabin (a whole 2cm more in fact) – certainly enough legroom in the back for those who are six foot plus.

At 1800Kg the new Audi A7 is also a little lighter than some of its main competitors such as the Mercedes Benz CLS Coupé. Audi claims as a result it’s much more fuel efficient, helped in part by the start/stop system which switches the engine off when at a standstill and a new 48V battery (which Audi refers to as ‘mild hybrid technology’).

At speeds of between 34 and 99mph, this battery enables the V6 engines to be deactivated and the A7 Sportback to coast in freewheeling mode. 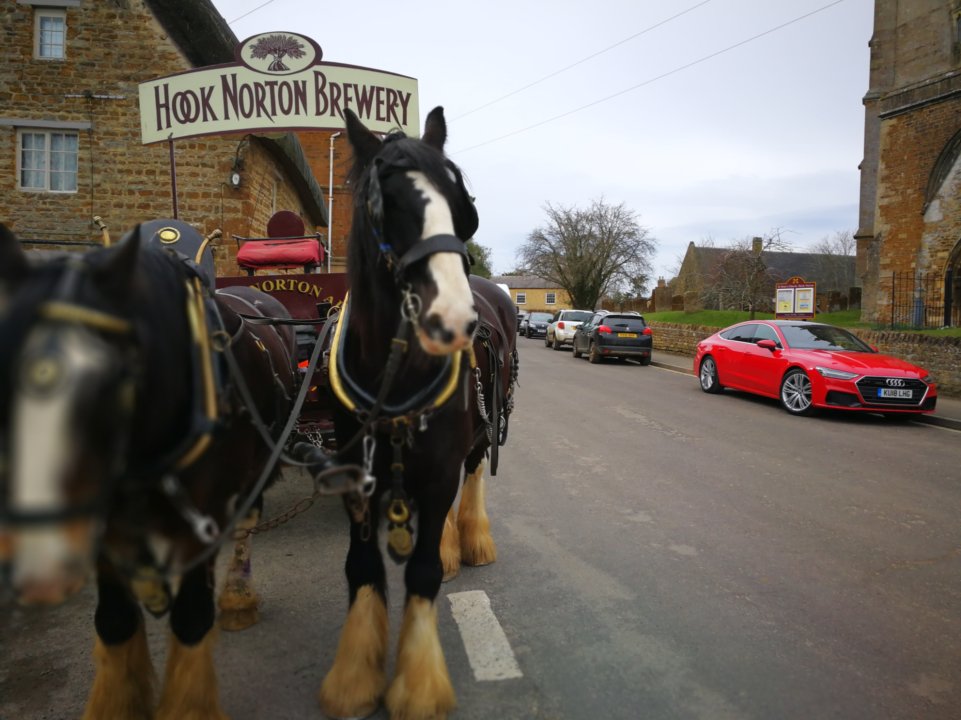 Of course when it comes to onboard tech much has changed since 2010 when the last A7 was launched. Indeed, as with all of the latest car models, technology has become the major battleground for manufacturers looking to stand out from the crowd.

The Audi A7 is no exception. Rather than relying on having to press various confusing buttons to navigate through the numerous menus, thankfully the new A7 is much easier to use. Just press the engine start/stop button and the glossy minimalist dashboard lights up to reveal different options. It even plays a sound rather like starting up a computer.

The central console comprises two parts. The lower 8.6inch panel features controls for the seats (the front two seats are heated) as well as the air conditioning system with separate and very discrete options for the driver and passenger side.

Above this the larger 10.1inch touchscreen where you can control the rest of the car’s features including navigation, audio and various driving modes.

In addition to providing touchscreen controls complete with haptic feedback so you know you’ve actually pressed the button, it’s also possible to use the lower console to write on with your finger. This then converts your handwriting (either cursive or, if you prefer, block capitals) into text that can be understood by the satellite navigation system. It actually works quite well – see YouTube video below.

Alternatively you can use the onboard voice recognition system by pressing the speech icon on the steering wheel. This can be used to carry out a wide range of functions such as turning the heating down, playing a DAB radio station or finding a location on the satellite navigation system.

However, it’s not as accurate as some systems out there such as Amazon’s Alexa, struggling with some destinations such as Aynhoe Park in Banbury where we were test driving the cars.

It also didn’t recognise the command ‘Play Radio 1’, I had to say to ‘Play BBC Radio 1’. That said, it was able to adjust the heating to the correct temperature very easily. 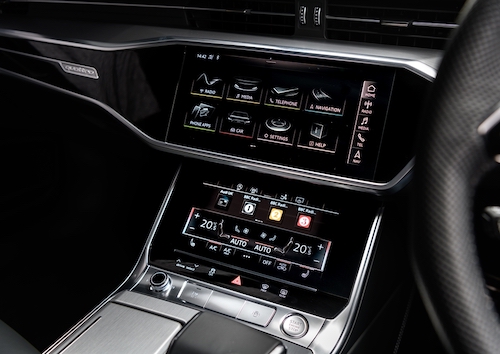 In addition to the central console there are also a number of other useful tech features.

These include wireless charging for QI enabled phones such as the iPhones 8, 8 Plus and 10 as well as the Samsung Galaxy S9 and S9+. Just place the phone in the compartment and it will automatically charge up. Also provided are two USB ports (these are also located in the storage compartment under the central consoles).

Behind the steering wheel is what Audi refers to as the ‘virtual cockpit’.  Here you can find another large customisable screen which can be used to display the satellite navigation system (complete with Google’s satellite maps if you choose) as well as various dials such as a rev counter and speedometer which can be adjusted in size.

As you might expect from such a luxury car, audio systems are very advanced too with the optional extra  ‘Comfort and Sound Pack’ comprising a Bang and Olufsen sound system with 16 speakers and a 730 Watt 16-channel amplifier.

Another option includes different coloured LED interior lights to suit your mood (although these were barely visible during daytime driving) while the exterior of the car boasts an entire LED lighting strip across the width of the rear with tail lights comprising 13 vertical light segments on each side. 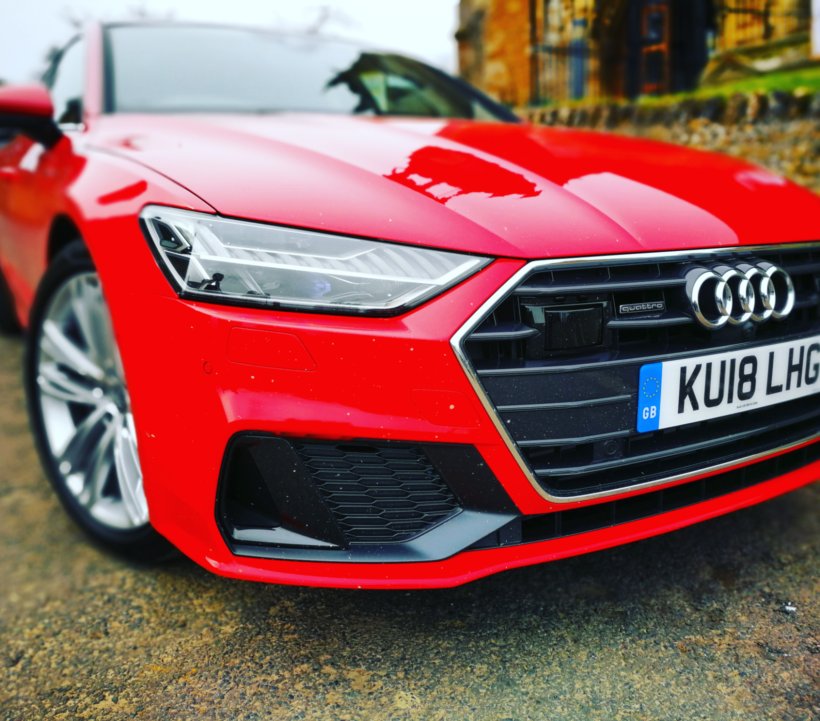 There’s no doubt that we are fast moving towards autonomous driving with a whole raft of semi-autonomous features now included on most high-end luxury cars. The Audi A7 is certainly no exception with up to 39 driver assistance systems available, including Audi Parking Pilot and Garage Pilot.

Although we didn’t test out Garage Pilot, which enables you to remotely park the car without having to be inside the vehicle, we were impressed with Audi Parking Pilot. As well as the usual reversing image you get from the rear camera, there’s also the option of having 360 cameras so you can view an image of the car reversing into a space from different angles, including from above!

Although it sounds a little gimmicky, I really thought it helped with reverse parking to be able to see the different views. Other driver assistance features include camera-based traffic sign recognition (though we weren’t able to test this in our rural location) and a lane departure warning which can see where the white lines are in the centre of the road and gently nudge you closer to the kerb if you are straddling them.

It actually works very well although we did notice that where there were double white lines in the centre of a narrow country road it sometimes seemed we were being guided a little too close to the kerb!

Matt Rance, product manager for the Audi A7, talks about the car’s tech in this YouTube video below:

As you might expect from a car of this calibre, and not to mention price tag, performance is predictably excellent. We tested two automatic diesel models, a Daytona Grey A7 Sportback 50 TDI Quattro S line 286PS Tiptronic followed by a very similar spec model in Tango Red (the standard price of both was £56,995, but rose to £77,045 with all the optional extras.)

While both models were very nice to drive, the first model we tested had a fault with the seat belt on the front passenger side which meant that a loud warning sound kept going off every few seconds even though the seat belt was on. It was really very irritating. Also I think the A7 looks much more sporty in red whereas in the grey it looks more like a slightly dull, sales rep’s car.

Certainly it handles very well round bends for a very large ‘C Segment’ car and isn’t generally short of power. You can really hear it roar when you put your foot to the floor which is quite satisfying. However,  I did think it was a little sluggish from a standing start, perhaps not helped by the start/stop system which is great for overall efficiency but not so good for getting away at traffic lights or a busy junction!

We tested the 3 litre diesel (TDI) model, now badged the 50 TDI, which offers 210kW power. However, there will also be a 3 litre petrol (TFSI) model, 55 TFSI, with 250kW power output available too. I think the petrol version would definitely be my choice although it is very slightly more expensive.

In summary, the Audi A7 is everything you would expect from a premium Audi hatchback. It looks pretty sporty like a  coupé, but has all the refinement and space of a luxury hatchback. And while the price tag is going to prove out of reach for a lot of people, if you are looking for a high end, high performance car packed full of the latest gadgets then look no further.