On Thursday, consumer warranty service SquareTrade posted a video of the Samsung Galaxy S6 Edge, HTC One M9 and Apple iPhone 6 Plus being put under immense pressure from their ‘BendBot,’ to see how easy it was to bend and break them. Their conclusion was that the S6 Edge was just as breakable as the iPhone 6 Plus (which memorably spawned #bendgate), and that the screen was easier to crack:

Unsurprisingly, Samsung – who have previously told ShinyShiny that the Edge screen is tough as nails – did not take this lying down. They’ve responded with a grumpy statement and a video of their own. The statement directly refers to the SquareTrade video, and states:

There are two things that need to be addressed with regard to the video.

First, the video assumes a very specific condition – 110lbf (50kgf), which rarely occurs under normal circumstances. The normal force that generated when a person presses the back pocket is approximately 66lbf (30kgf). Our internal test results indicate that the Samsung Galaxy S6 and S6 edge are not bendable even under 79lbf (32kgf), which is equivalent to putting pressure to snap a bundle of five pencils at once.

They then go on – in slightly shonky English – to challenge SquareTrade to repeat the test and make the results public:

For this reason being, Samsung will officially deliver our statement to SquareTrade and ask them to conduct the stress test again which targets both front and back sides, and open the test result to the public.

Followed by stating that Samsung “are confident that all our smartphones are not bendable under daily usage.”

Here’s their video, in which they test both sides of the phone (albeit with considerably less pressure than the 149 pounds SquareTrade used: Samsung only goes up to 80):

Did you catch that snarky intro? 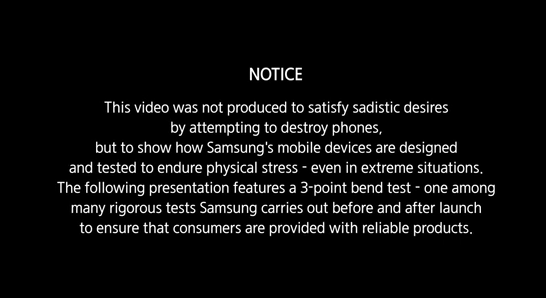 We can’t wait for the next episode of #bendgate. It’s better than Neighbours.

With thanks to TechRadar for the heads-up.