Every budget handset released in the last year has been compared with Motorola’s super-cheap Moto E, often unfavourably. It’s considered one of the best entry-level Android handsets out there, and the 2015 update seeks to cement that position by adding 4G, a selfie camera and a few more little upgrades.

But a year on from the original release, is Motorola’s budget offering still top of the pile? Here’s our Moto E (2015) review. 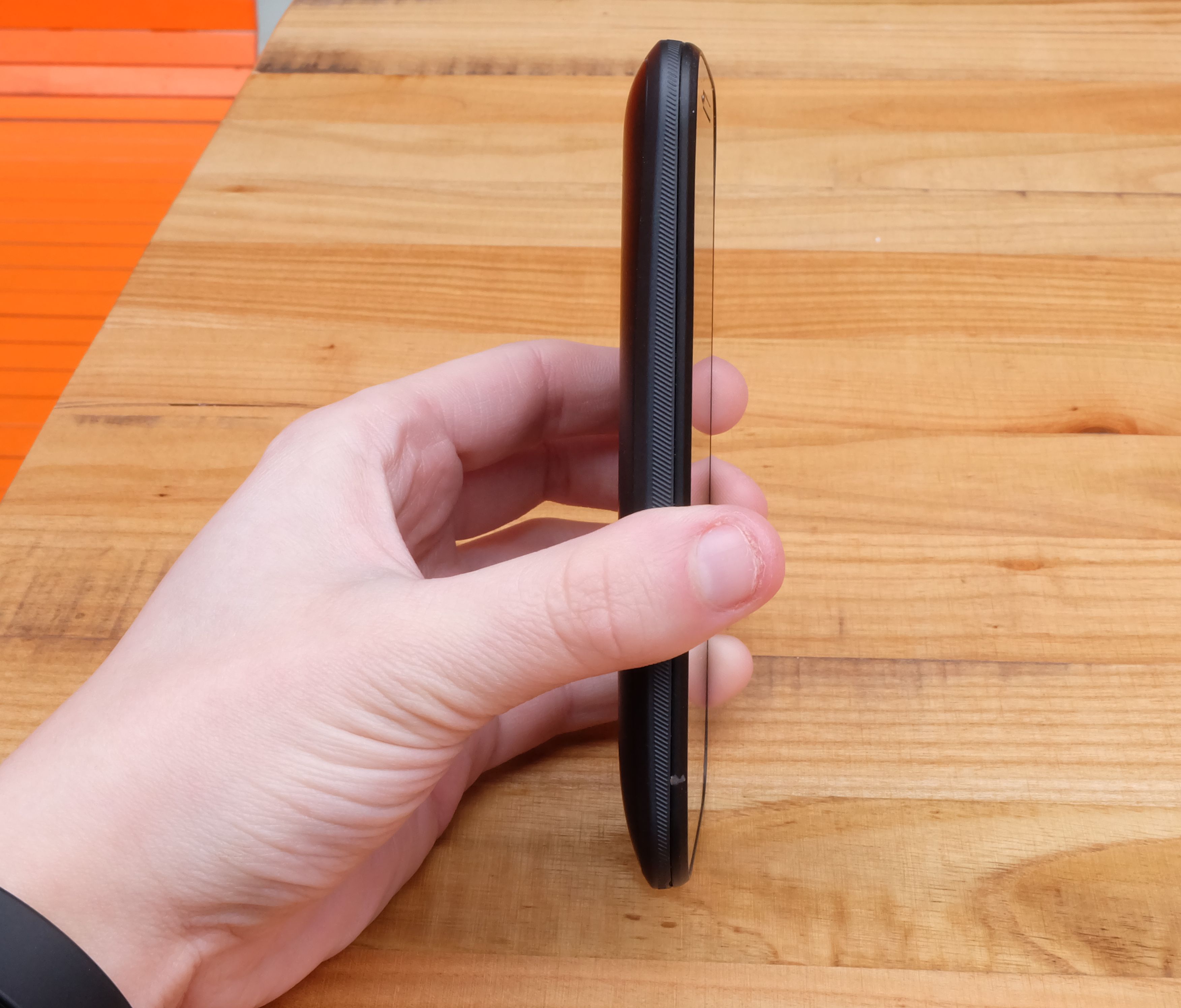 It’s a bit chunky, but there’s something very sweet about the Moto E’s form factor. It’s heavier than you expect at 145g, which helps it to not feel like a toy phone (as with so many budget handsets), and the matte plastic back panel feels more premium than you’d expect at this price. The handset itself only comes in black or white, but Motorola sell brightly-coloured bands that fit seamlessly around the edges to add a pop of personalisation. 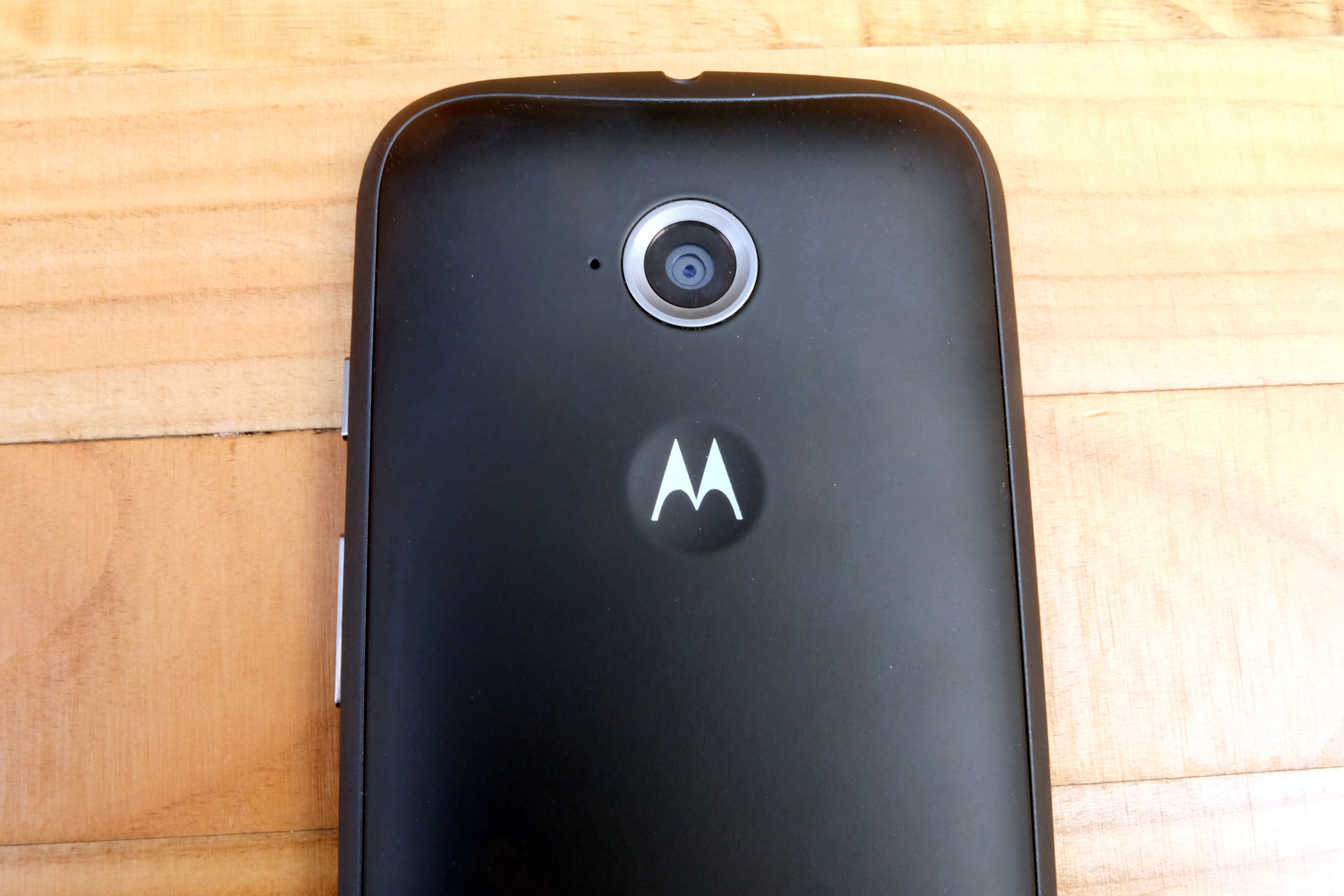 You’ll find the volume rocker on the right-hand side of the phone, below the power button. They’re both raised enough to be distinct, and the power button has an etched texture to help you distinguish it without looking. As with the Moto G, there’s an ugly silver speaker bar across the top (but not the bottom this time) and fairly chunky black borders (bezels) around the screen. This is to be expected on a budget phone, and it doesn’t look bad. There’s no branding to the front, just a silver M in a recessed dimple on the back below the camera lens. Motorola like their centred designs, and the Moto E is no exception: the headphone jack is in the middle of the top edge and the charging port is in the centre at the bottom. 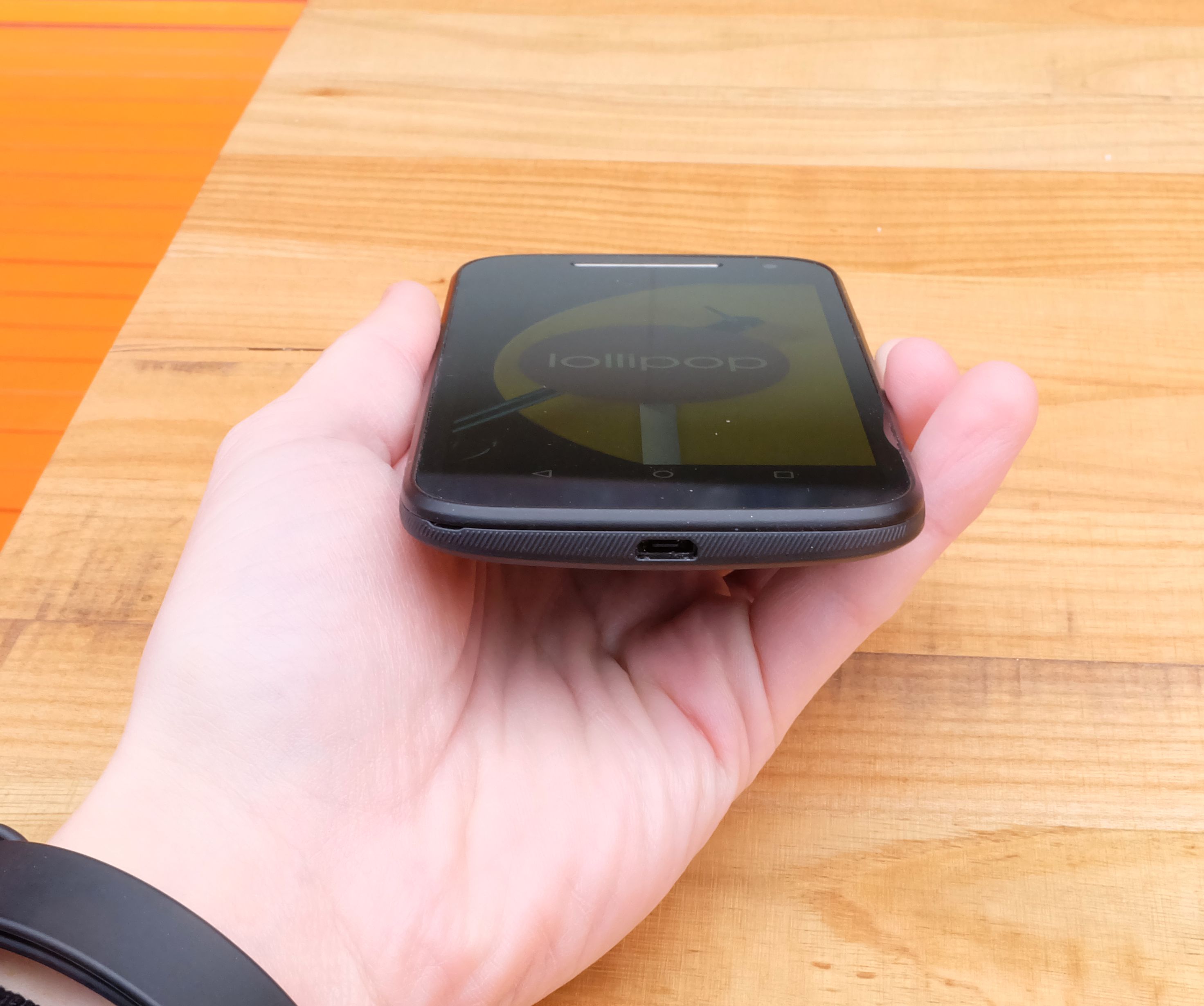 While I don’t like the look of the speaker, it’s a real bonus that it’s front-facing. That means you can put the phone down on any surface without muffling the sound, and holding it in your hand won’t affect the output either. It’s amazing how many phone manufacturers don’t get this. Motorola do, and the speaker is louder and clearer than I expected, too. It’s good enough that when I played the shouty intro segment to Muse’s ‘Psycho’ at work, the whole room turned around. Impressive.

It’s brilliant that despite its price, the Moto E 2015 comes with the latest version of Android, Lollipop. Phones almost three times its price still don’t offer that, so this is a big tick in the Moto E’s box. As is the addition of 4G, which the last Moto E didn’t have.

Unsurprisingly, the E uses the lower-end Snapdragon processor, the 410. This is a good decision: Snapdragon chips are popular for a reason, and while this obviously isn’t as good as the top-end ones, it’s still a quad-core processor for a very low price. As a result, the phone is snappy and responsive for the most part. I’ve only seen slowness sometimes on unlocking, and occasionally when I’m switching between heavy-duty apps. That’s more than fair for the cost. The 1GB of RAM is a little low, though – I would have liked to see 2GB. The internal storage is also low at 8GB, especially since a lot of this is eaten up before you get the phone – my review unit actually reports that only 5GB is available to begin with, and about 3GB remained for me to use. Thankfully, there’s an SD slot for cards up to 32GB.

Motorola phones are well-known for providing an almost-untouched version of Android, and the Moto E is no different. This is a huge benefit, in my opinion: most manufacturer overlays get in the way of the pure, clean experience Android is designed to offer, and very few add anything of value. Another smart decision, and another reason to prefer this phone over budget alternatives.

The screen on the 2015 edition of the Moto E is ever-so-slightly bigger than the previous one, receiving an upgrade from 4.3 inches to 4.5. It has quarter-HD resolution (540×960) with 245 pixels per inch, which sounds fairly low but actually looks surprisingly good. It’s an IPS screen which means very little darkening when you tilt the phone or aren’t looking at it straight-on. 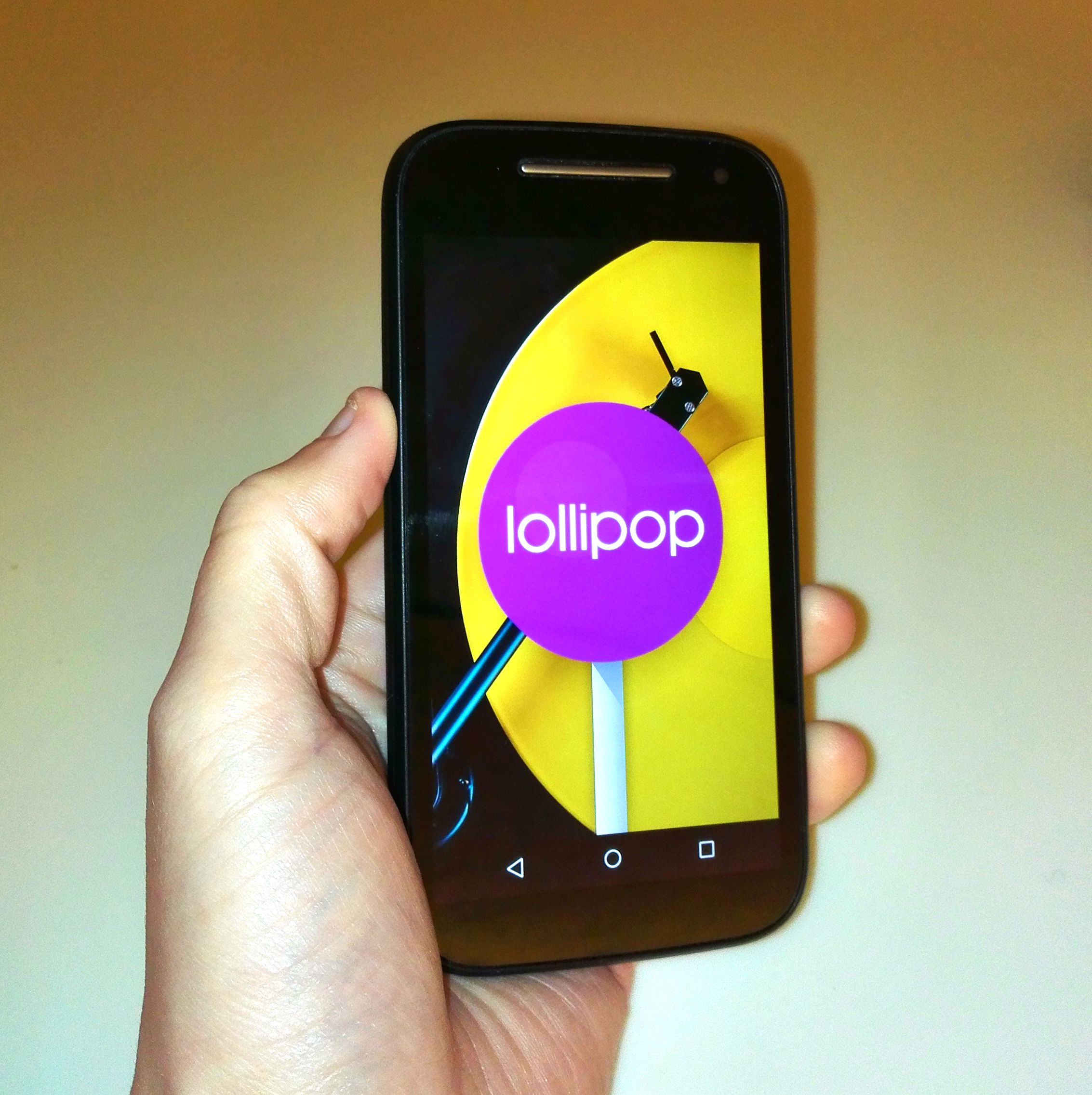 The screen’s covered with Gorilla Glass 3, which isn’t the latest version but has never failed us yet (note: not a challenge). Gorilla Glass protects the display from scratches and cracks, and works really well. There’s also apparently an anti-smudge coating, but I can still see plenty of fingerprints if I hold it under the light. Nonetheless, it’s a very glossy screen which feels slippery-smooth and responds perfectly to touch interaction.

Colours aren’t as bright as they could be and icons look a little smudgy if you hold the phone close to your face, but at this price, the quality is more than fair. Screen brightness goes up decently high but struggles a little in direct sunlight. There’s a setting to automatically adjust brightness according to your environment, but I found it mostly made the screen ridiculously dark, so I turned it off. This will affect battery life, though.

Earlier versions of the Moto E and Moto G were criticised mostly for camera performance, but I was impressed by the quality of the shots I took on the 2015 version. The main camera is 5MP but doesn’t have a flash, so it only takes clear photos in good lighting. Darker environments are pretty grainy, but that’s also the case on many more expensive phones.

I love the double-twist wrist motion that Motorola include on this and the Moto X (strangely absent on the Moto G) – you just twist your wrist twice really quickly while holding the phone to open the camera, even if the screen’s off. Much pricier phones offer this feature, so it’s great to see it on a budget handset, and it worked every time I tried.

The camera app, though, is basic to the point of being a bit useless. It’s not at all clear that you have to swipe in from the left to access the menu – you’d be forgiven for thinking the app only had one button. That button isn’t a shutter, either – you have to tap the screen to take a photo, which is confusing when we’re all used to tapping to focus (focusing involves dragging a circle around the screen). The menu options are very limited, but include HDR, touch to focus, video, panorama and timer. The Moto E 2015 can also record video in 480p (I’d have hoped for at least 720p) and slow-motion.

You can of course download a different camera app, but on an entry-level phone, I think it’s fair to say most people will stick with the native one – and this really should be better. 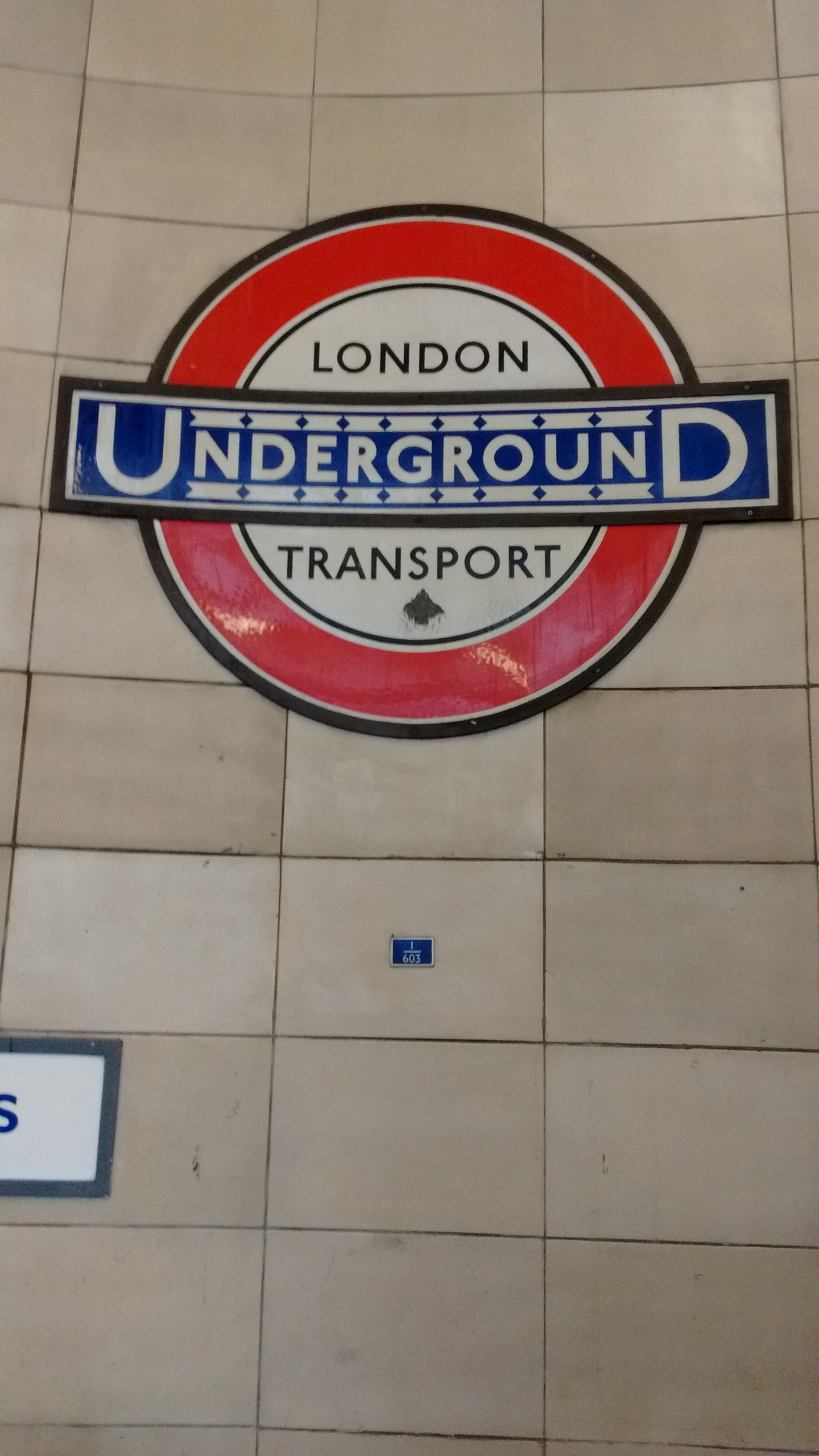 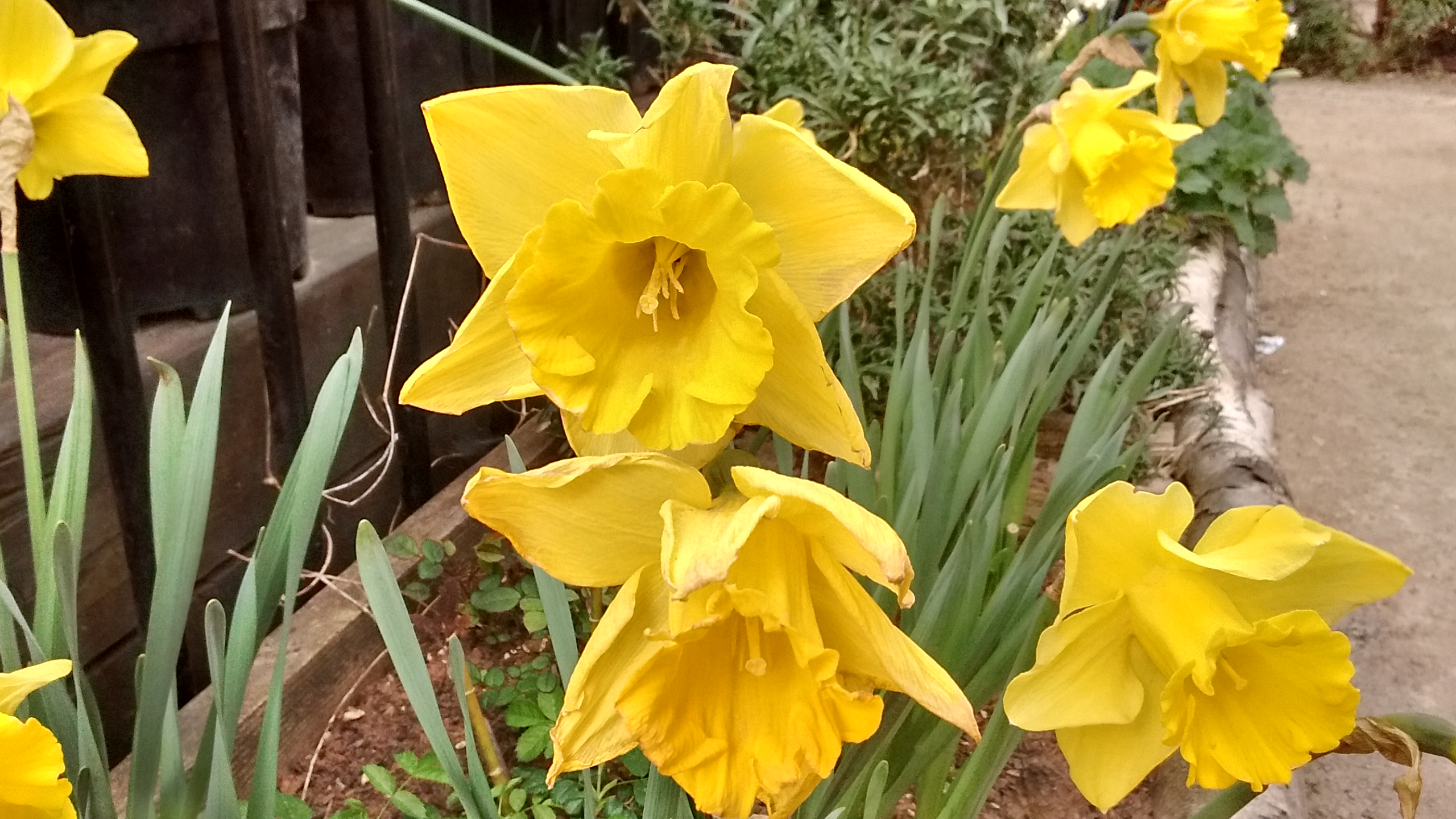 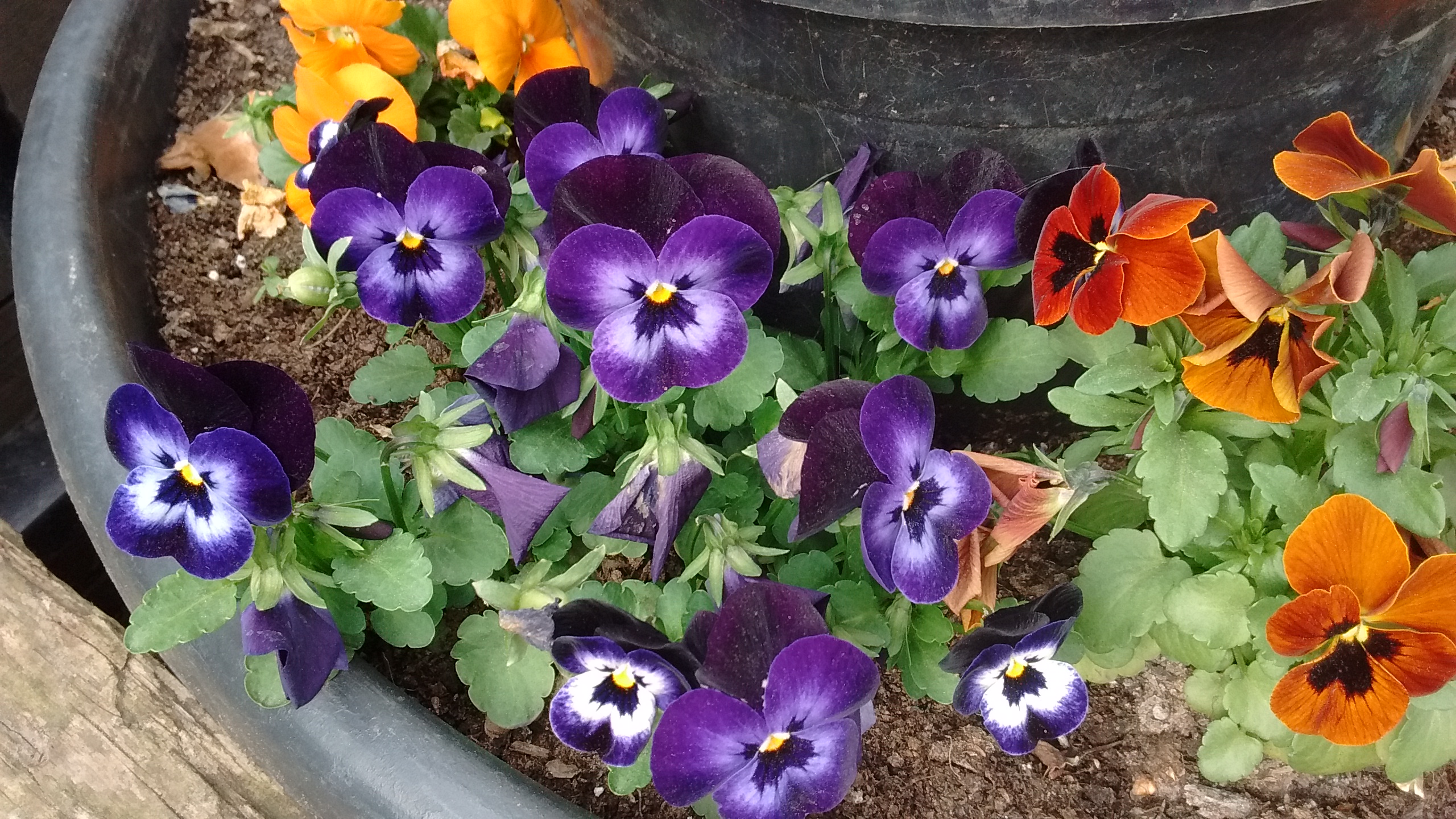 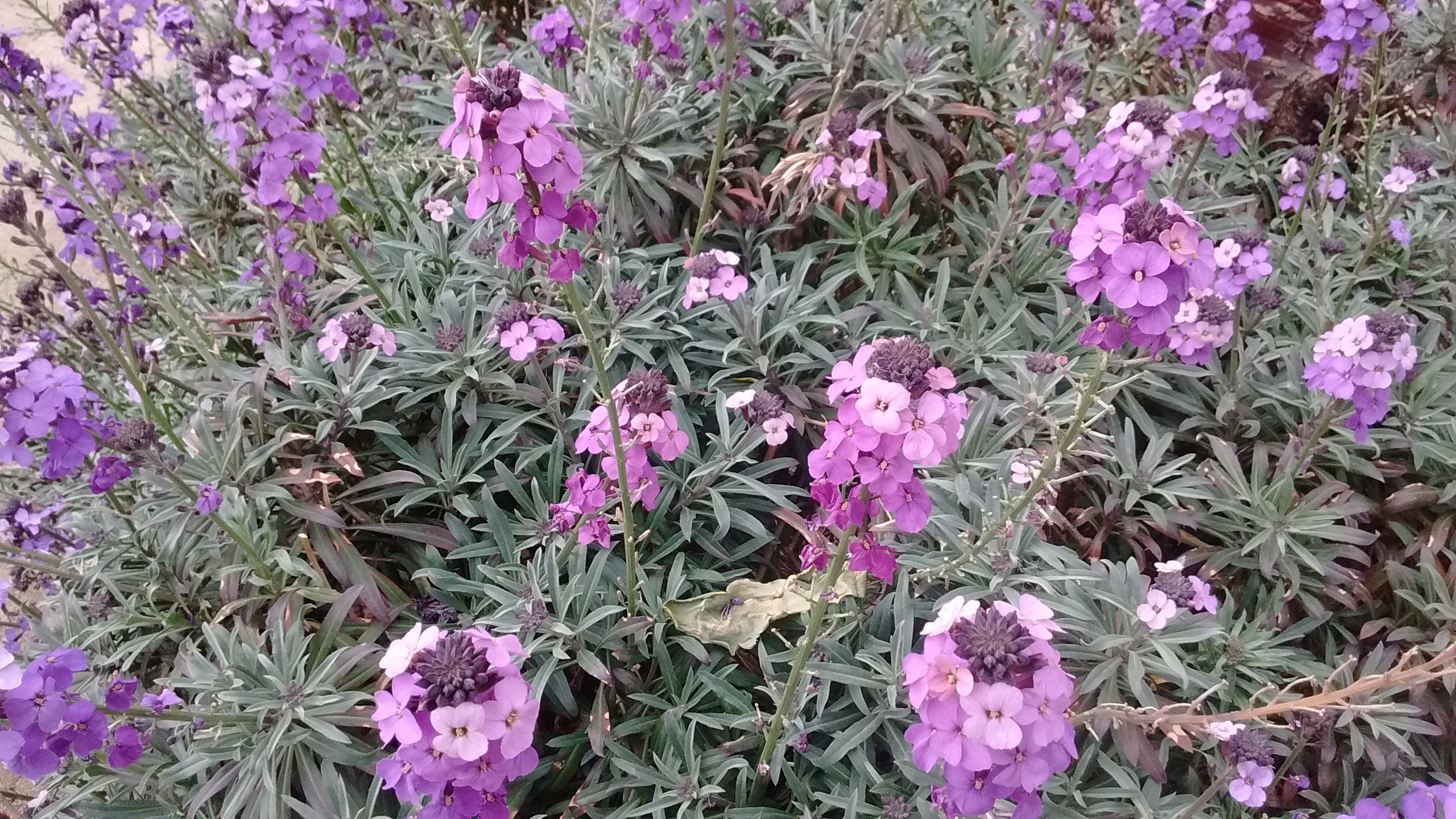 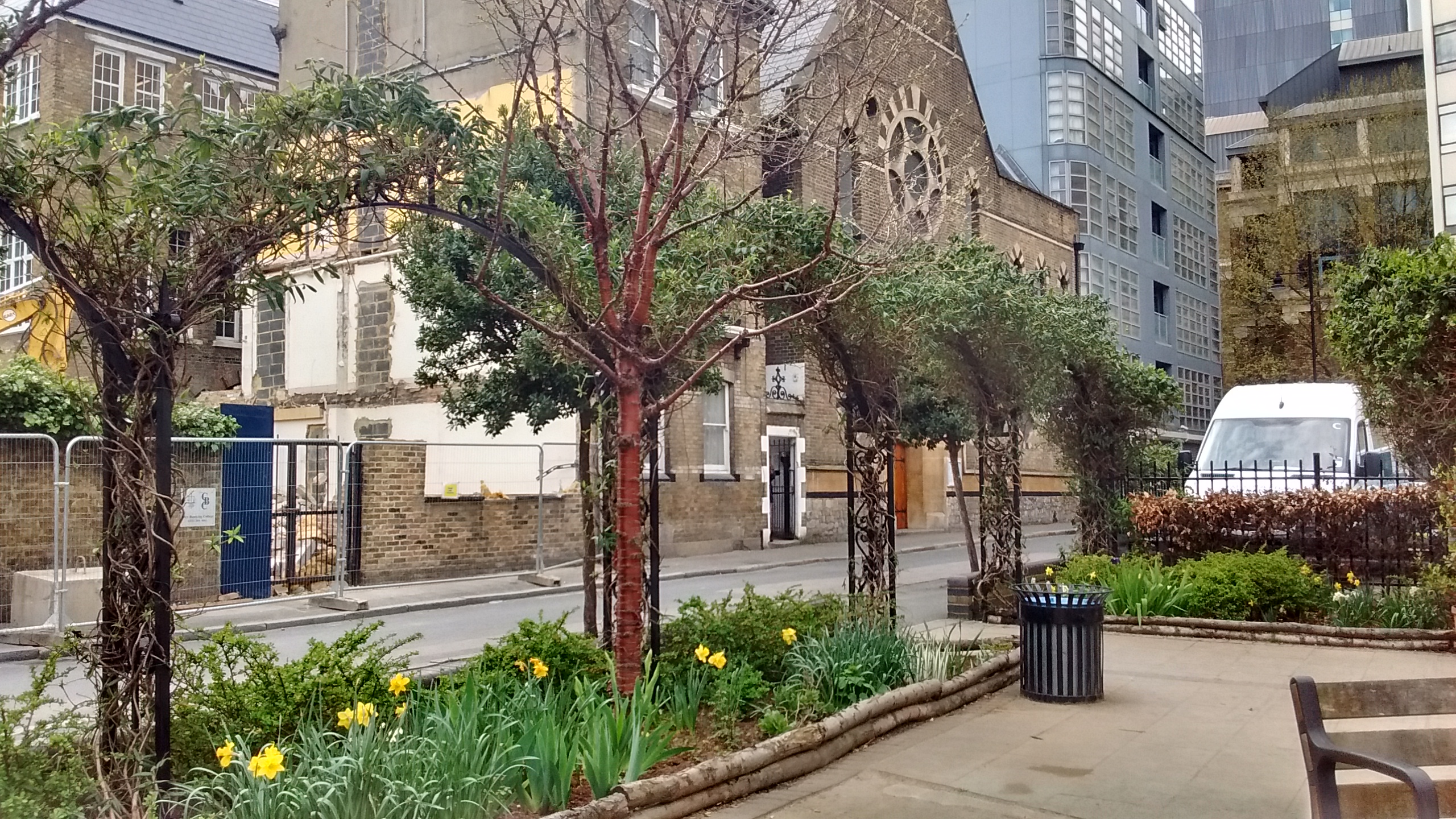 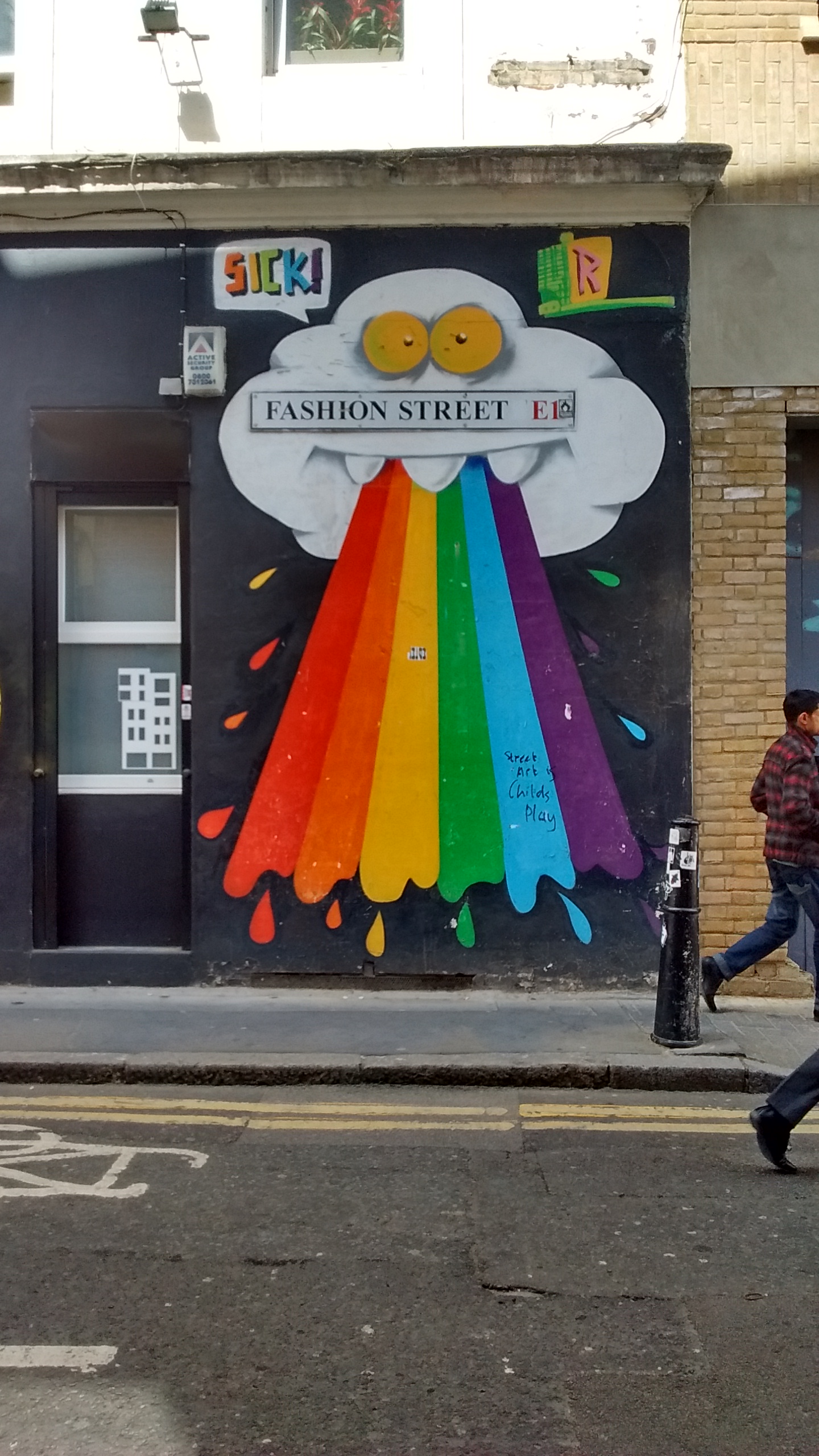 New to the 2015 version of the Moto E is a front-facing (selfie) camera. However, it’s VGA resolution (ie. rubbish) and really not worth having. 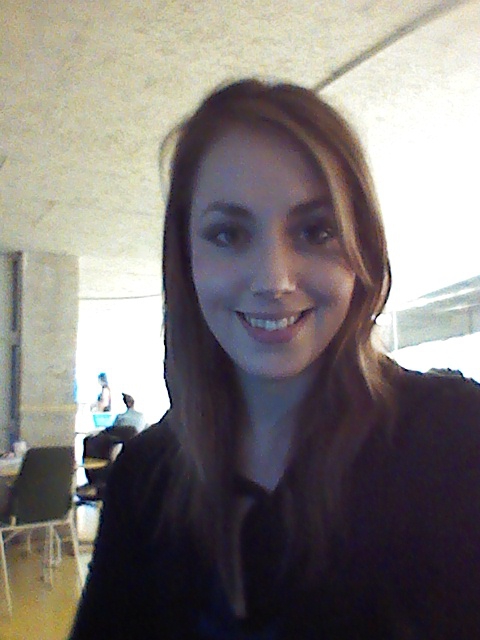 Good for Impressionists, though.

But how well does it last? Much better than I was expecting. We ran our usual test of streaming a fullscreen HD film over WiFi with brightness set to max and GPS on, and after 2 hours, the Moto E 2015 had 62% of its charge left. The Moto G had 61%, while budget rivals did worse: the EE Kestrel had 50% left, the Alcatel OneTouch Pop S3 48%. The aforementioned two flagships both scored in the fifties too, so this is a great result for a lower-end phone.

In daily use, the Moto E comfortably lasted the day, except on heavy-use days (and to be fair, I use my phone a lot). Surprisingly strong performance for a £109 handset.

Apart from the selfie camera and the native camera app, this is an excellent all-rounder for the price. It has an appealing design, offers good performance and battery life, and runs a mostly-untouched version of Android Lollipop. The Moto E 2015 is genuinely impressive in what it offers for just £109, which means that once again Motorola have topped the budget charts with this charming little phone.