The Moto G was originally launched all the way back in 2013, and was widely hailed as one of the best budget Android phones on the market. Two years on, having become Motorola’s best-selling smartphone ever, the Moto G has received an upgrade – one we’re referring to as the Moto G 2015 to avoid confusion (Motorola’s naming scheme is a bit discombobulating). The Moto G now offers 4G, a bigger screen and an SD card slot. And it still costs just £149.

But does it offer the same performance and value for money as its predecessor in a market that’s changed significantly since the phone first launched? Here’s our Moto G 2015 review.

If you’re used to higher-end phones, the Moto G 2015 will feel a bit too thick and a bit too heavy. It’s like a flagship from 2013. But that bulk also lends it an indestructible, hardy feeling, which is reassuring. I’m not going to drop it from the Shard, but I think this phone could probably sustain a fair few falls. 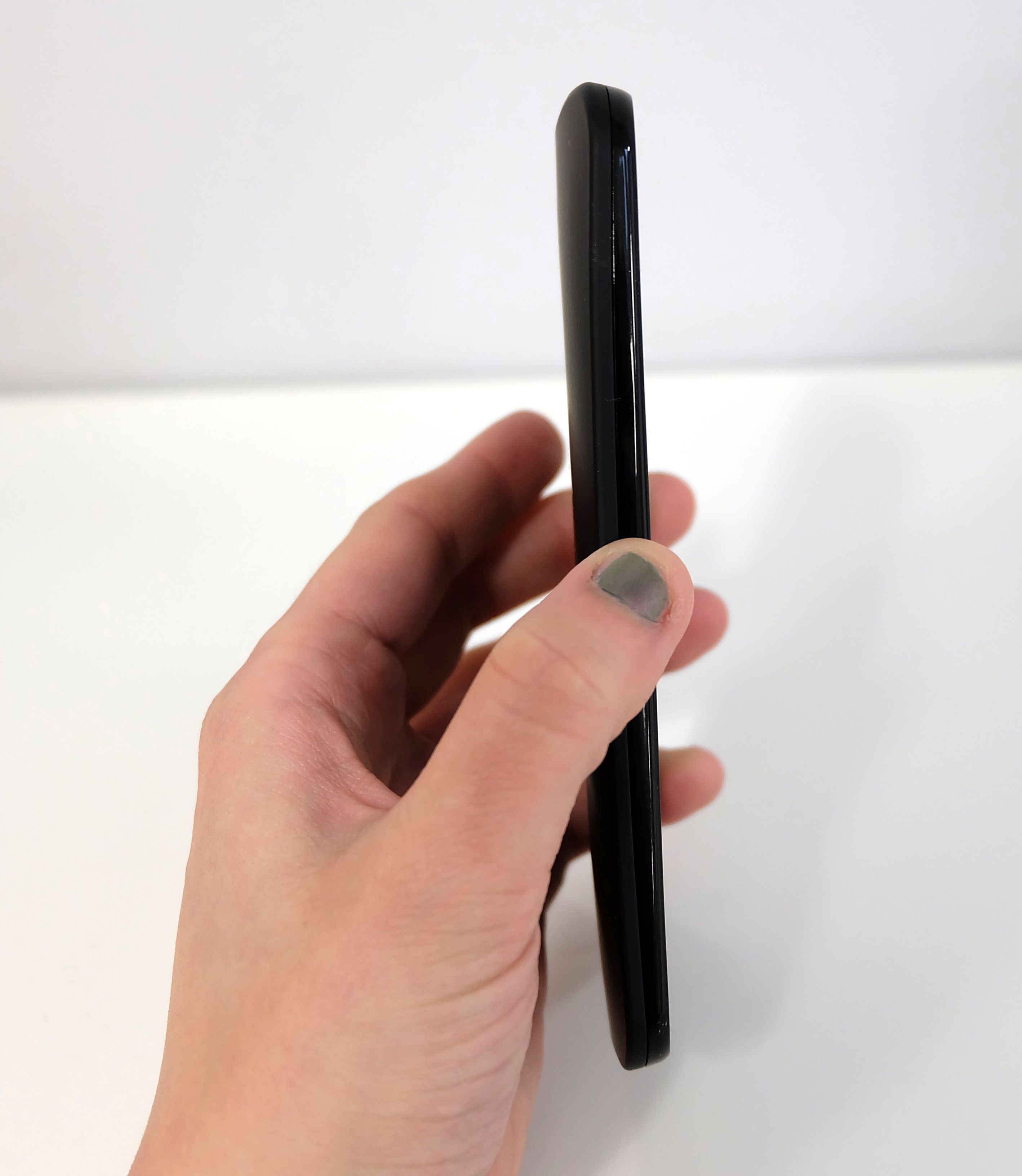 One of the things Motorola does really well is personalisation. Many, many phones – high and low end alike – offer basic colours and no more, and the budget price of this handset would be enough justification to do the same. But while the handset itself only comes in black, there’s a plethora of sunshine-bright shells available to replace the phone’s back panel. That looks a lot nicer than adding a case on top – though there are plenty of official cases on offer too. 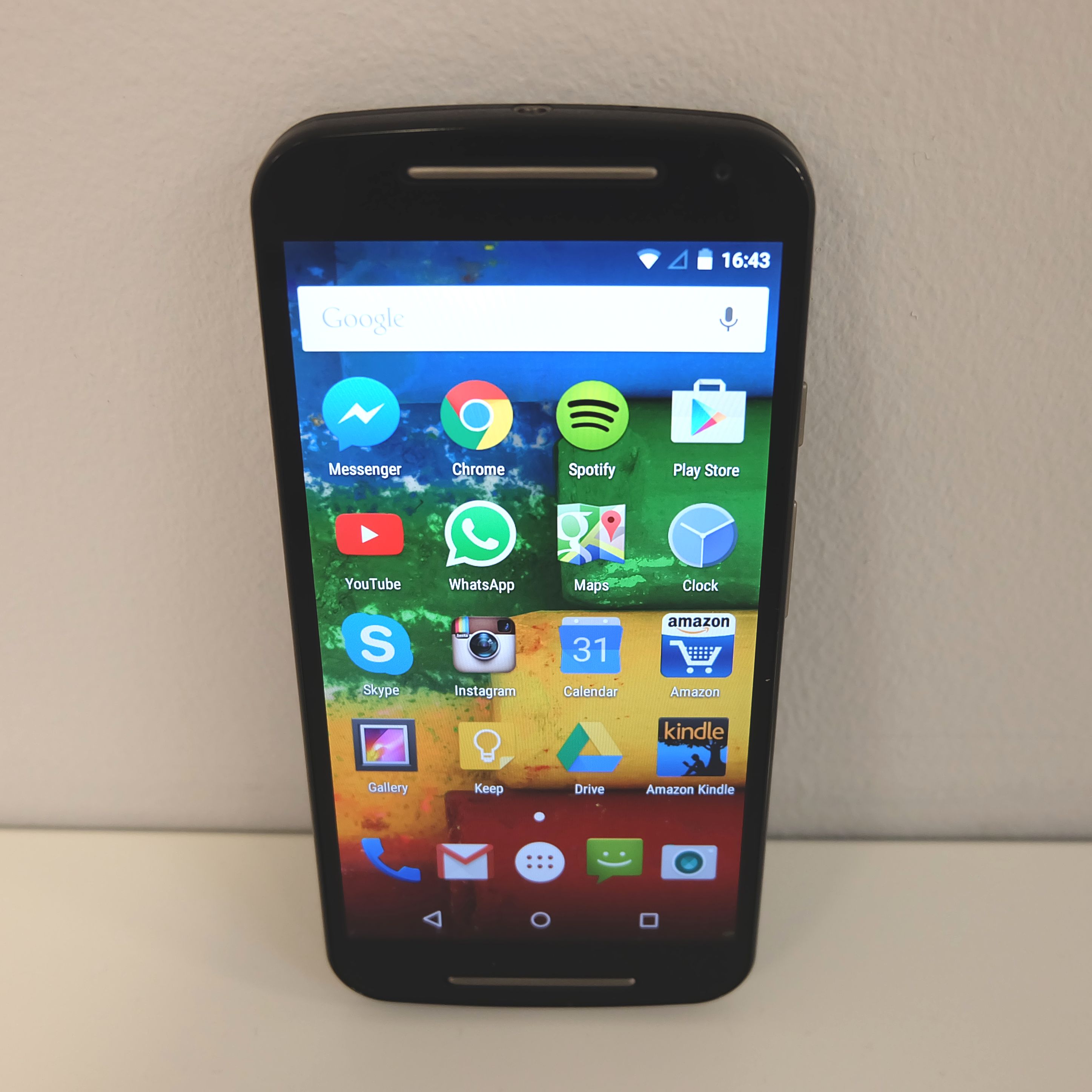 That back panel has a pleasing rubberish texture, and doesn’t pick up fingerprints easily. It’s grippy enough to keep hold of and smooth enough to feel good in your hand. The back is classy and understated, with centred features and a silver Motorola M in a dimple the same size as the camera lens. 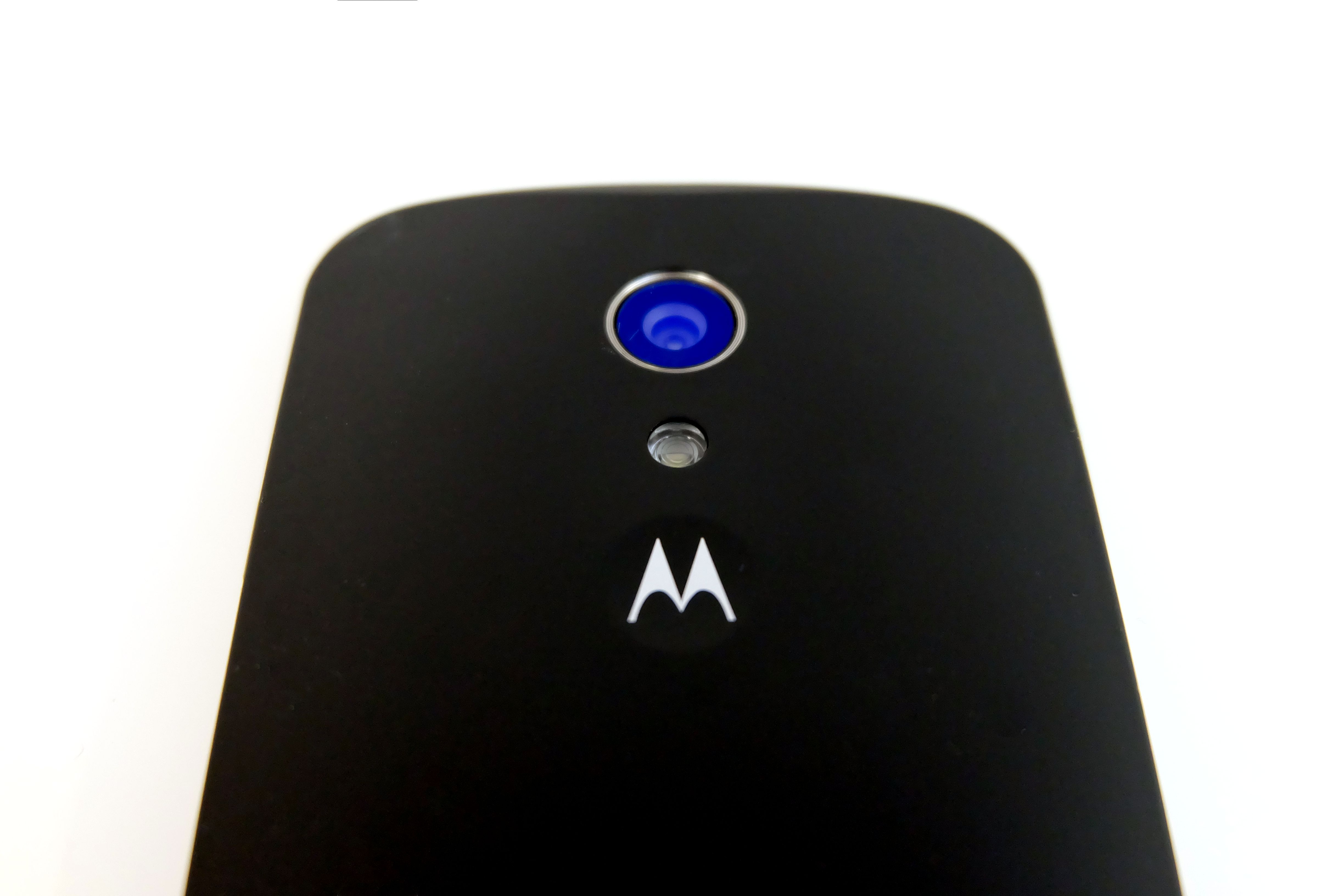 The front is less attractive. Two huge and ugly silver speaker bars flank the screen, with thick bezels (black bars) at the top and bottom. That’s fair enough on a budget device, but when the rest of the phone looks good, it’s a shame the design lapses on the most-used face. 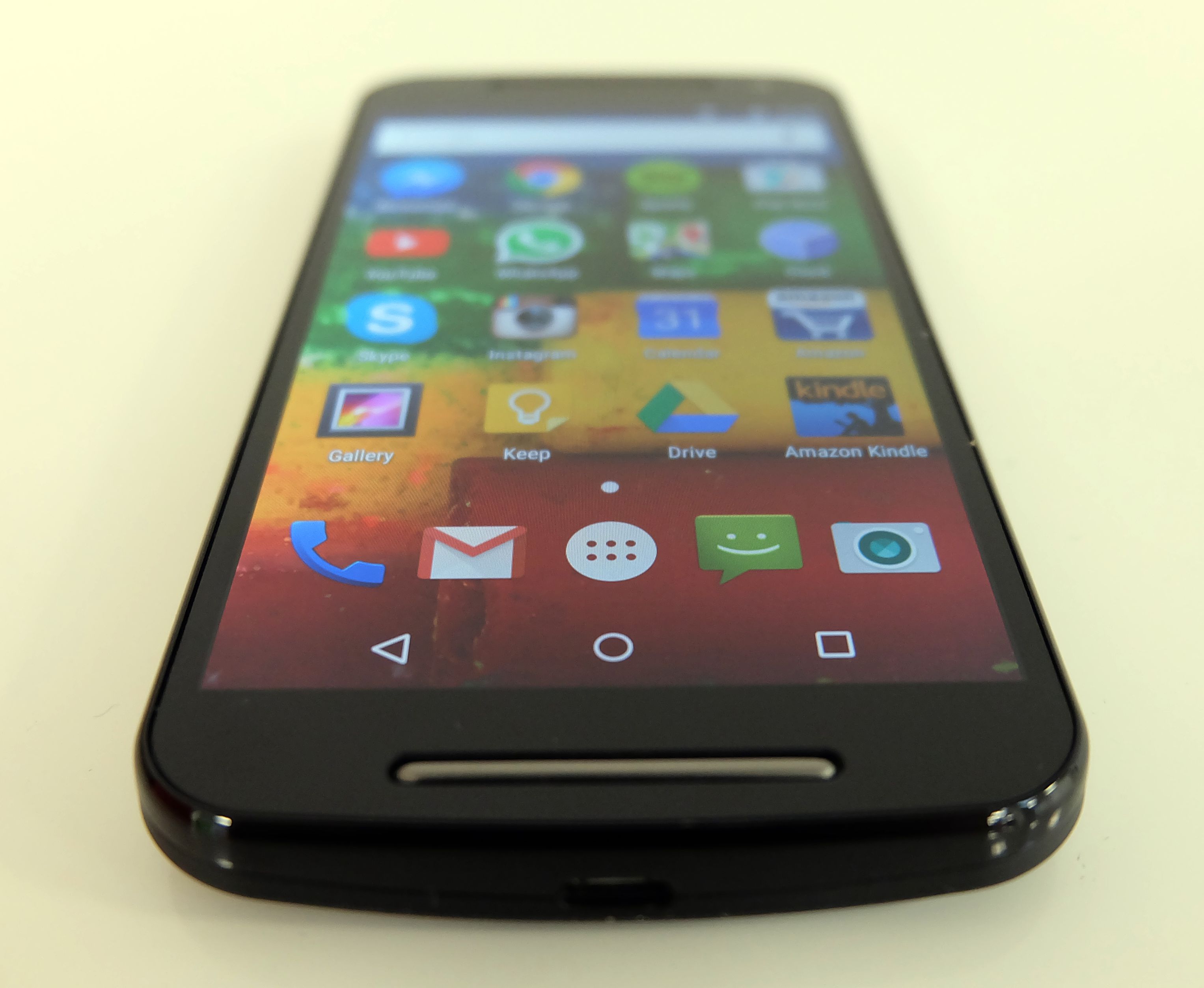 The speakers are worth it, though, providing surprisingly loud and mostly noise-free sound that doesn’t dampen when you put the phone down on a surface (dear lord, do I hate rear-facing speakers). The back of the phone vibrates a bit at higher volumes if you’re holding the phone, but it’s not really an issue. 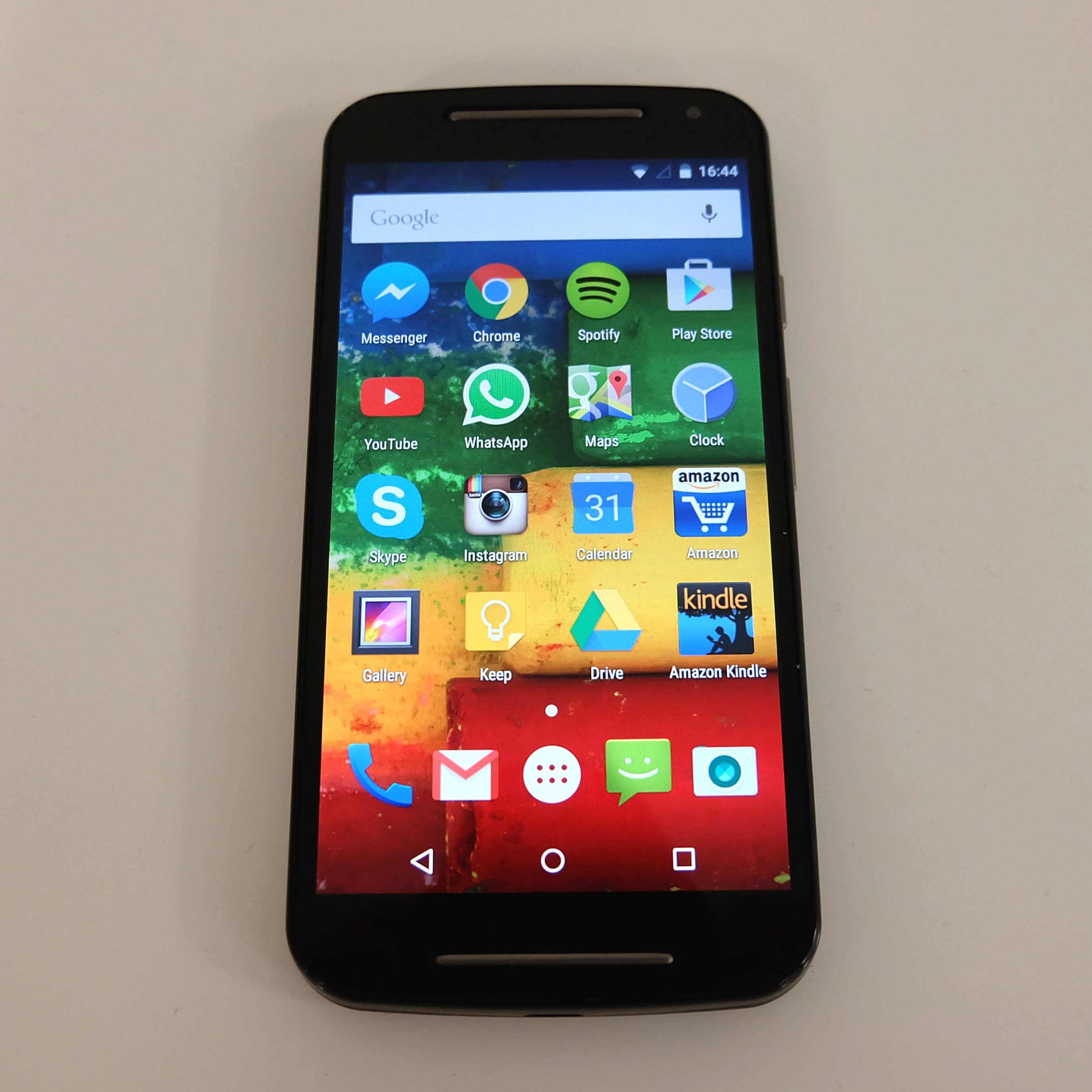 The power key and volume rocker sit on the right hand side and are easy to find without looking.

Then there’s the headphone port at the centre of the top side, and charging port in the middle of the bottom end. The design team for this phone really like centring things – I’m surprised they didn’t put the front-facing camera in the middle, too. 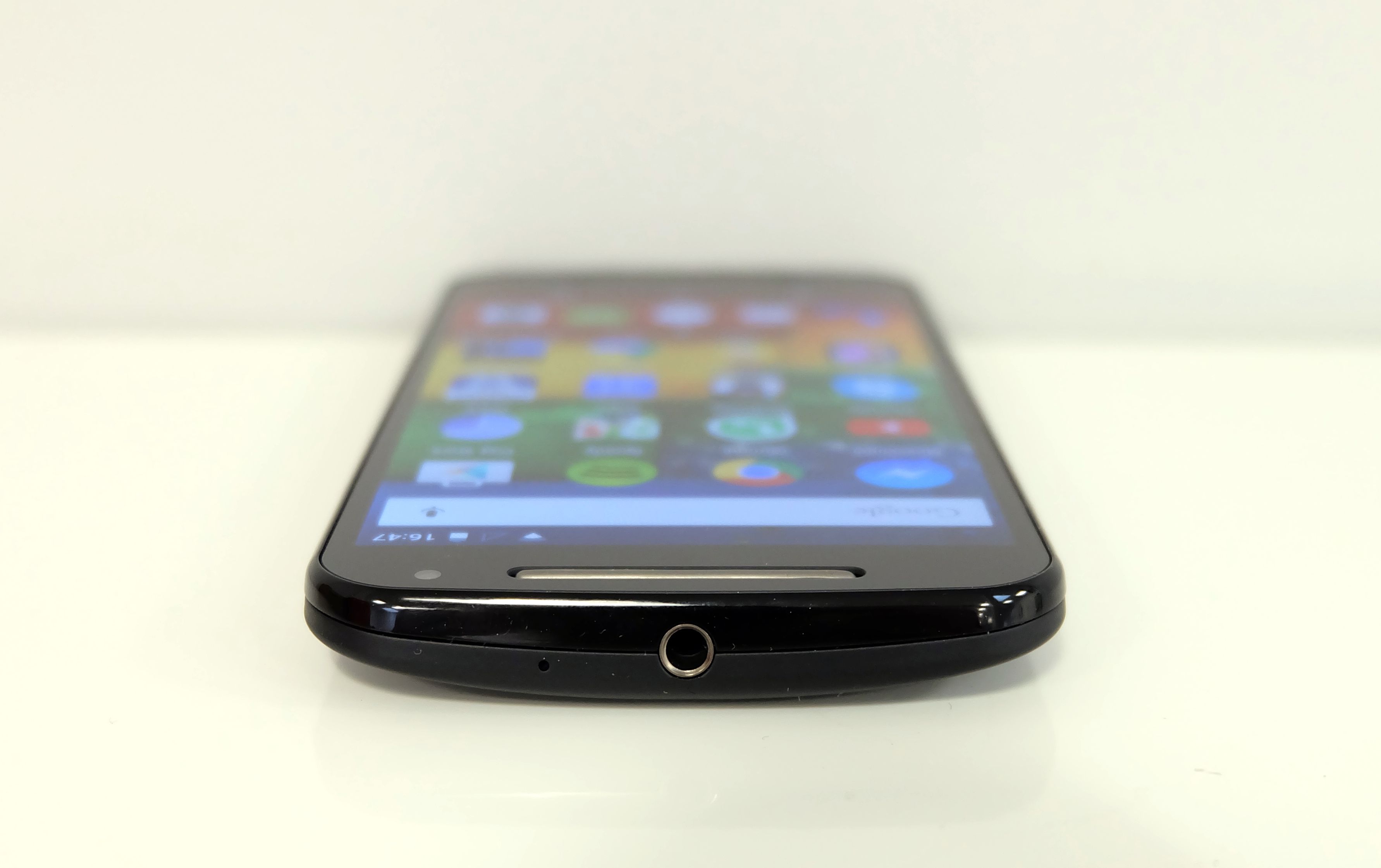 The Moto G 2015 comes with Android Lollipop pre-installed, which is really good to see. No one wants to be running the an outdated version of Android, even on a budget phone – and even better, there’s no messing about with the experience. It’s pure Android: no toppings, no sauces, no nonsense. That’s refreshing, and for the most part means using the phone is a hassle-free and intuitive experience.

Under the hood, the Moto G 4G has 8GB of storage (though a good chunk is taken up before you get it – ours had about 2GB eaten by preinstalled bumf), which you can expand by up to 32GB with a microSD card. That’s a big plus – extras like this are often the first to go on a low-cost handset. It’s powered by a SnapDragon 400 quad-core processor, which is a solid choice, and now includes 4G for faster-loading cat videos.

The RAM is a bit disappointing, though: just 1GB. In 2015, even on a low-end phone, that’s a bit poor. We’d have expected at least 2. This might explain why we had some occasional performance problems with the phone: nothing major, just some lags when opening apps, and a couple of hangs. At this price, it’s more than forgiveable, but we still think Motorola could have stretched to another gigabyte.

They have splashed out (sorry) on making the phone water-resistant, though – not fully waterproof like the Xperia Z3 line, but still enough to put your mind at rest if you take it out in the rain. This is particularly important for those of us who live in Britain. 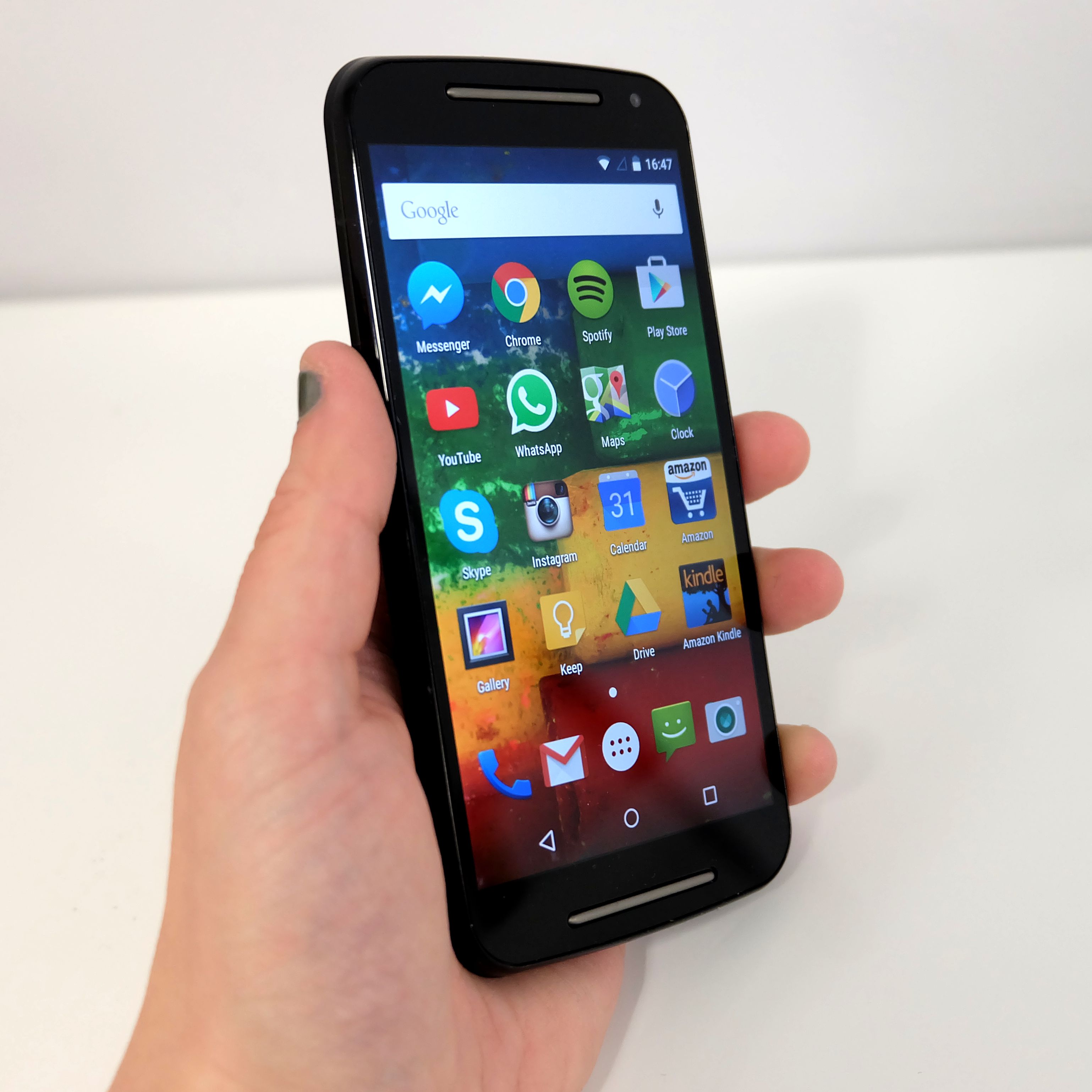 The Moto G’s screen is very good for a budget device. It shows colours faithfully (though not particularly vibrantly) and hardly darkens at all when you view it from different angles. It doesn’t go especially bright, though: the top level is plenty bright enough for everyday use but in yesterday’s unseasonably sunny weather I couldn’t see as much as I’d have liked. If you’re used to a higher-res screen, you might find things like icons look a little smudgier than you’re used to, especially if you hold the phone closer to your face. But realistically, with everyday use you’re not going to notice.

The 5-inch screen size means you can reach almost all of the display with one hand, and the picture appears very close to the glass. Overall, for £149, this is impressive.

The Moto G 4G’s main camera offers 8MP, which is about what we’d expect at this price. The native app is a bit underpowered, though: if you tap the screen, it takes a photo as soon as it’s finished focussing. I’d have preferred the chance to focus, then take the picture when I was ready. You can drag the focus icon around to change where the focus hits, but again the photo takes as soon as it thinks it has a lock, and sometimes it’s wrong, leading to blurry pictures.

Also, I was tremendously disappointed to find that the double-twist gesture from the Moto X and Moto E isn’t on this phone. The feature allows you to quickly twist your wrist twice to instantly launch the camera, even with the screen off. Why it was left out of this phone when it’s on the cheaper Moto E is anyone’s guess, but it’s a sad omission.

The menus on the camera app are very lacking – you mostly have to guess what the icons are before tapping them, and there aren’t many settings you can change:

The main and selfie cameras can only record in 720p HD, too – we’d have hoped for 1080 even at this price. Still, the main camera can do slow-motion video, which is something.

The photos the main camera takes are perfectly good: easily clear and crisp enough to share. 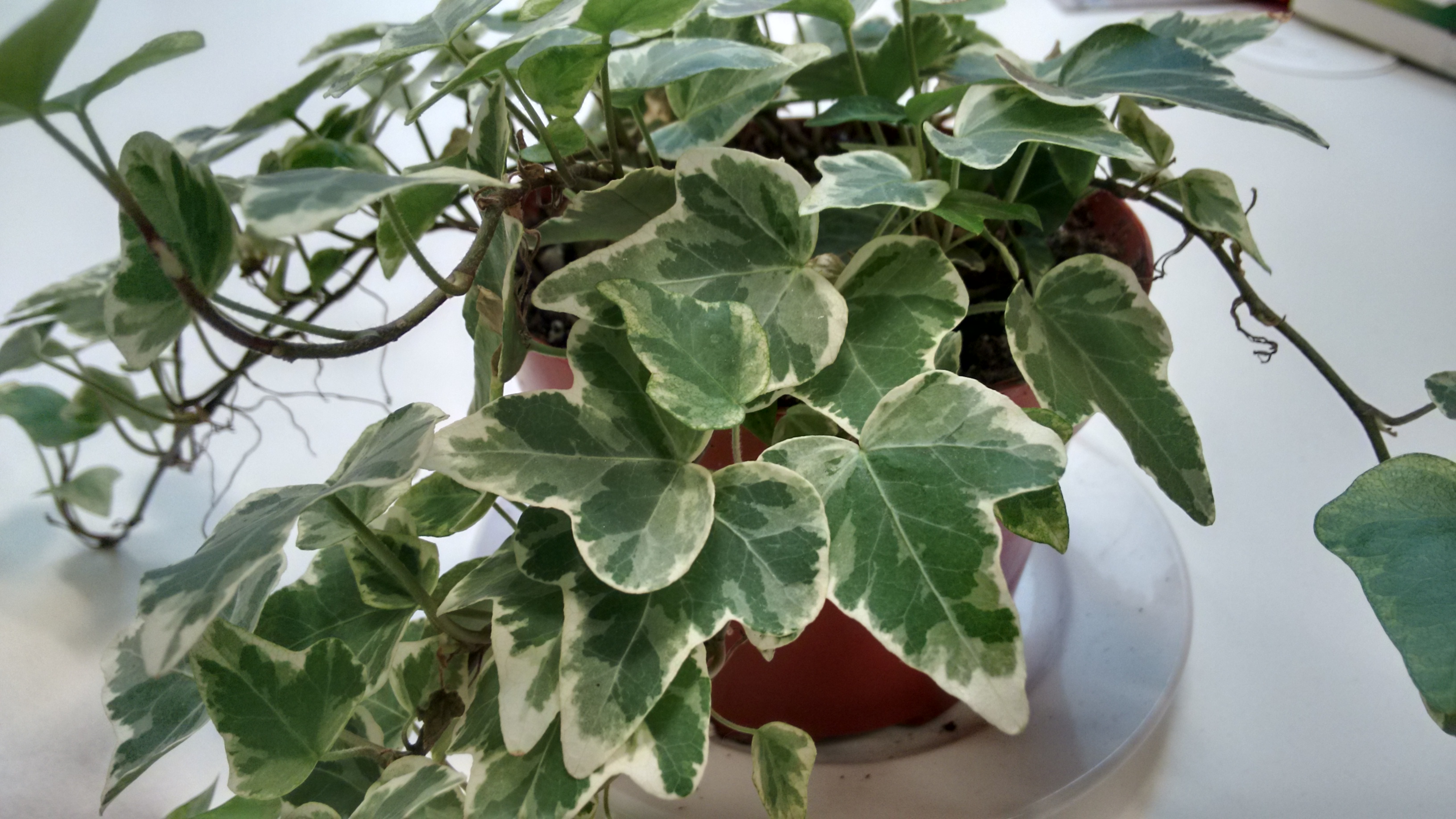 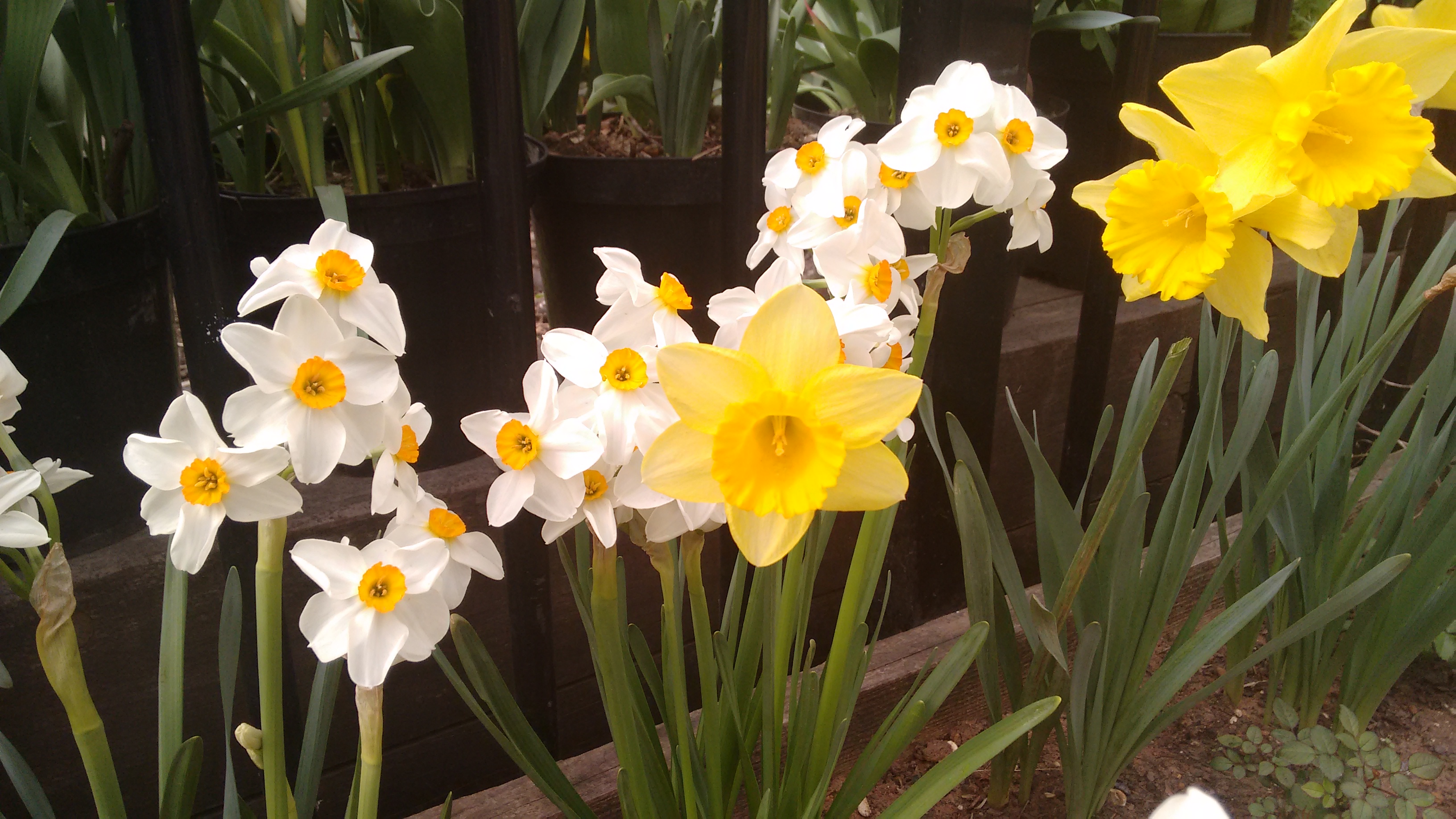 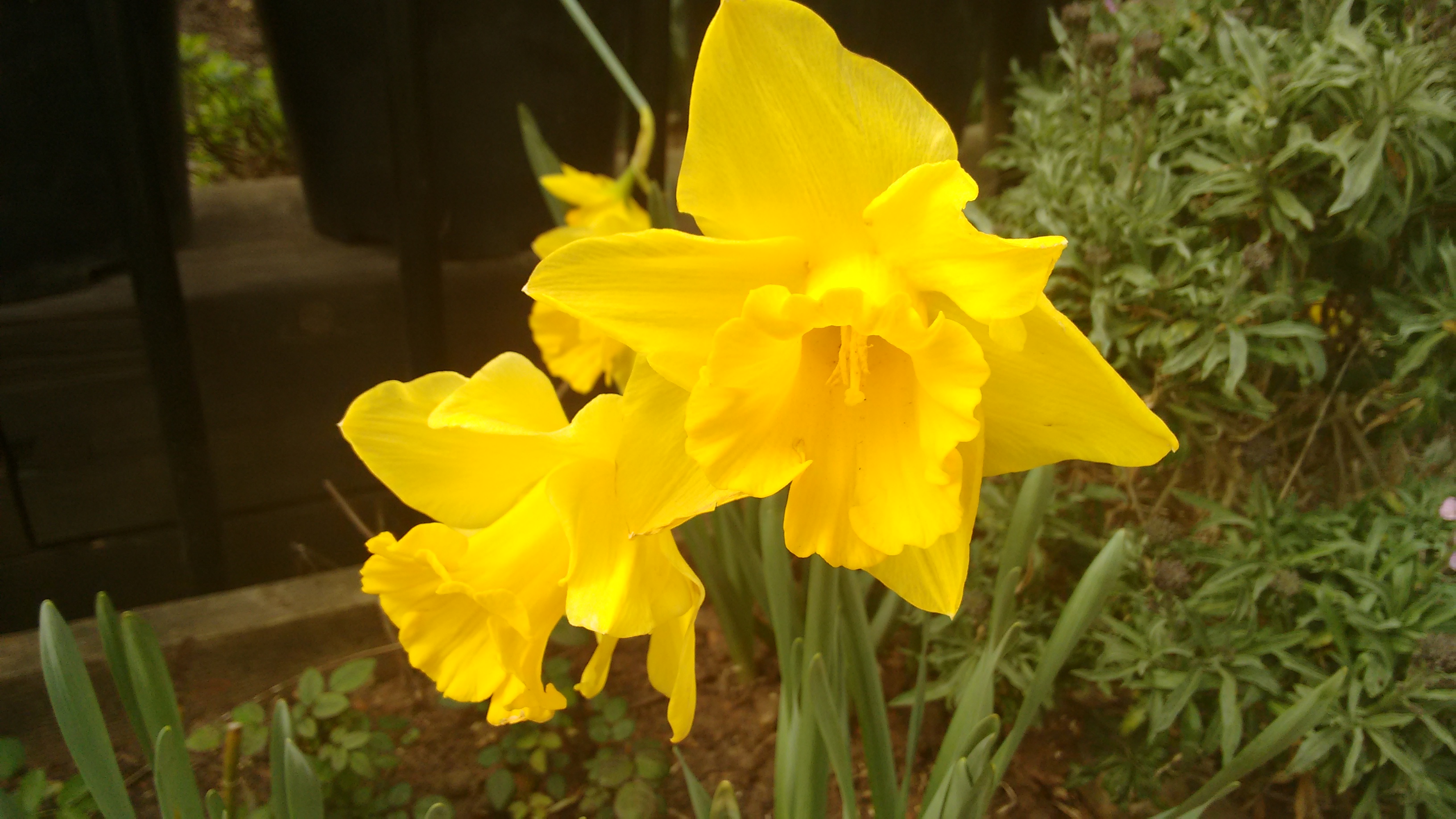 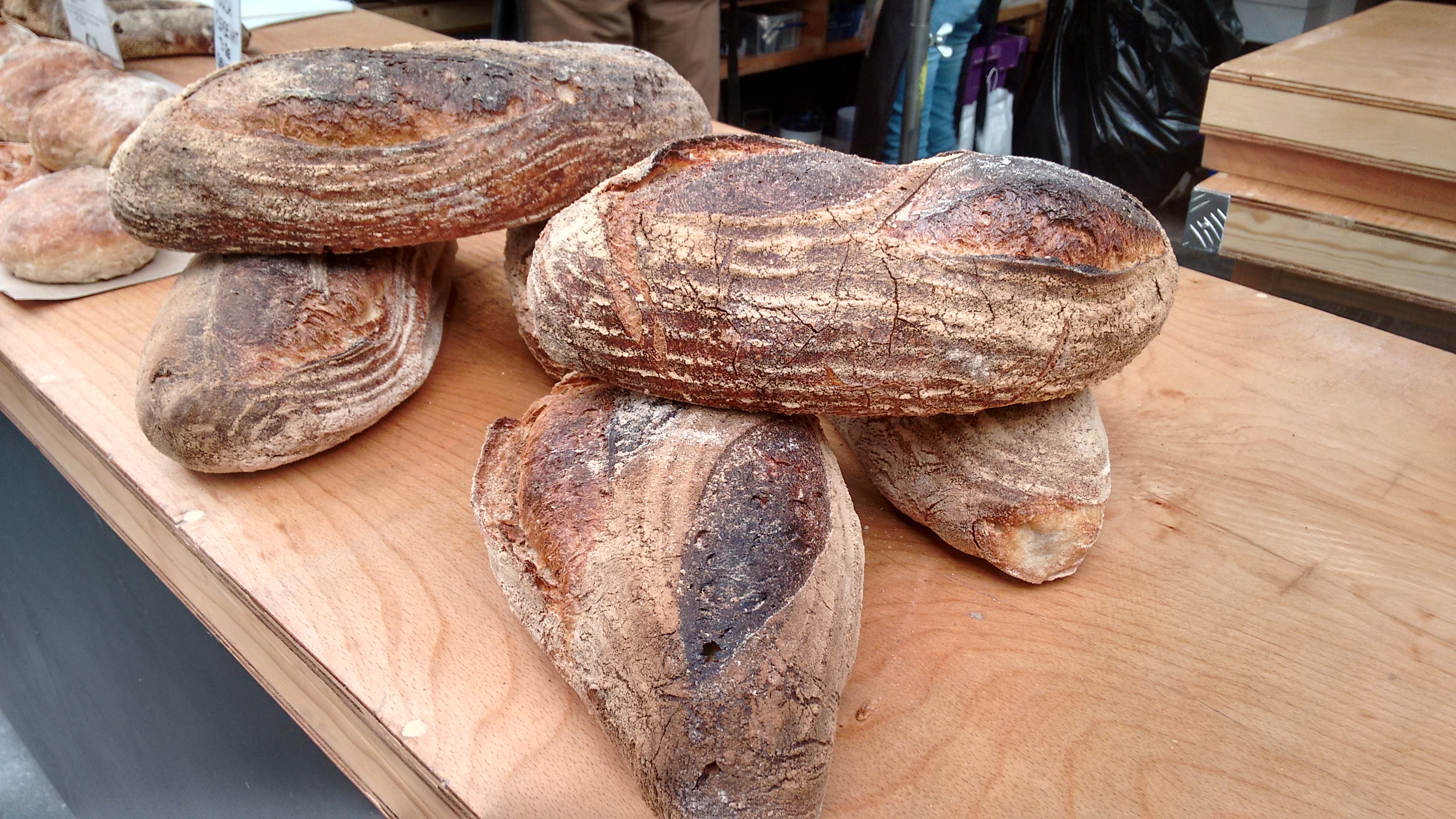 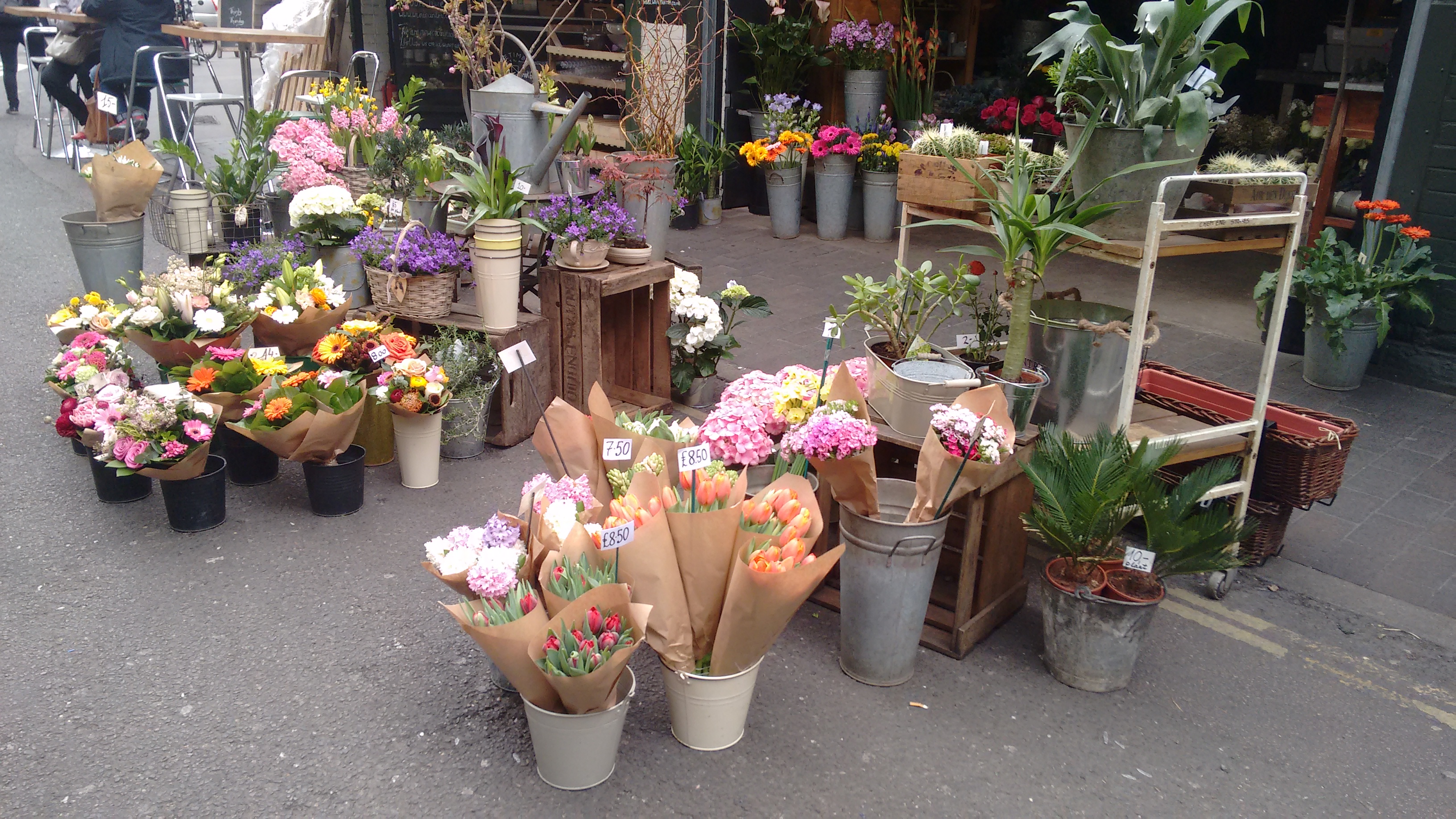 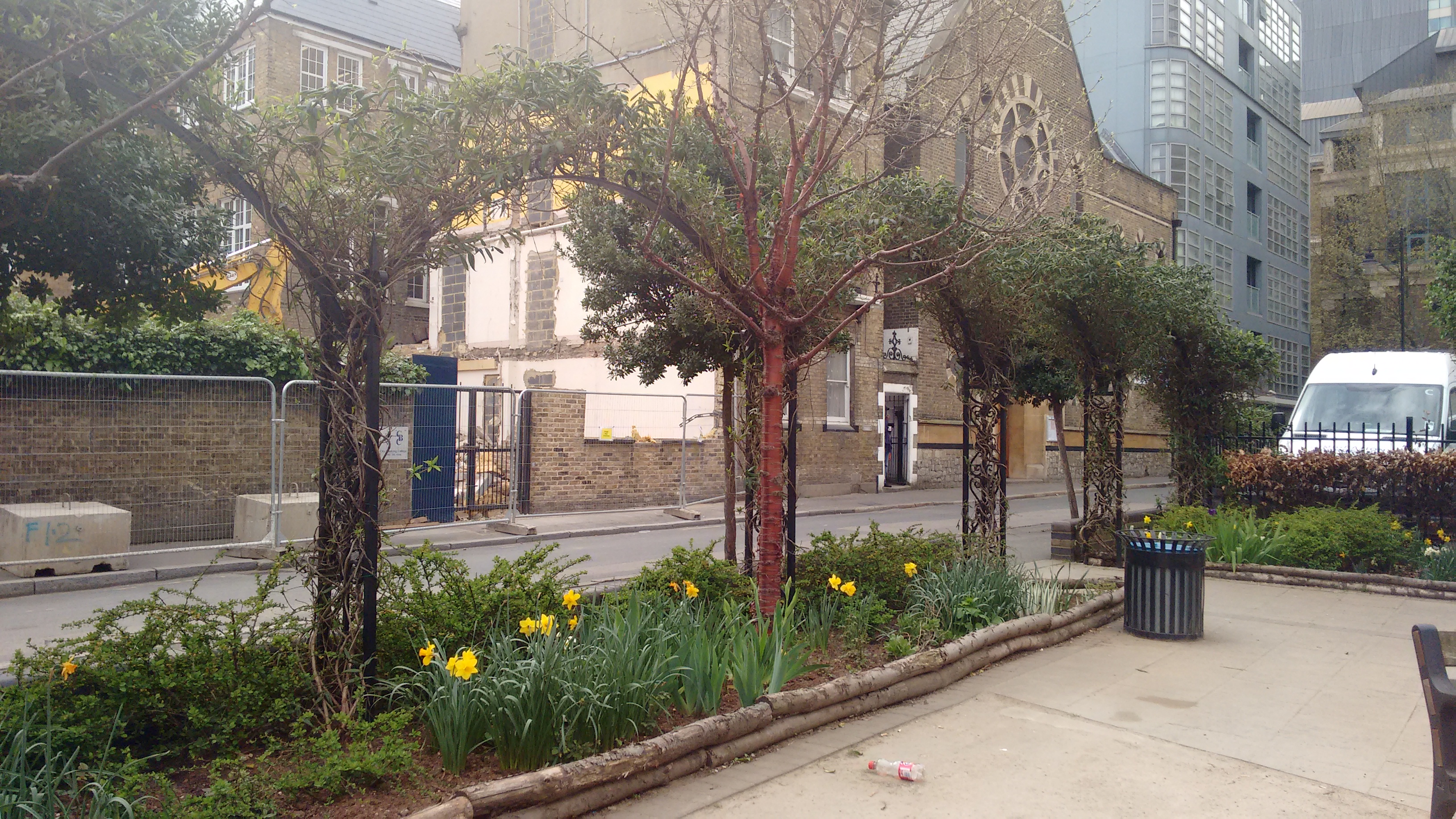 And getting shots of moving targets is tricky, but not impossible: 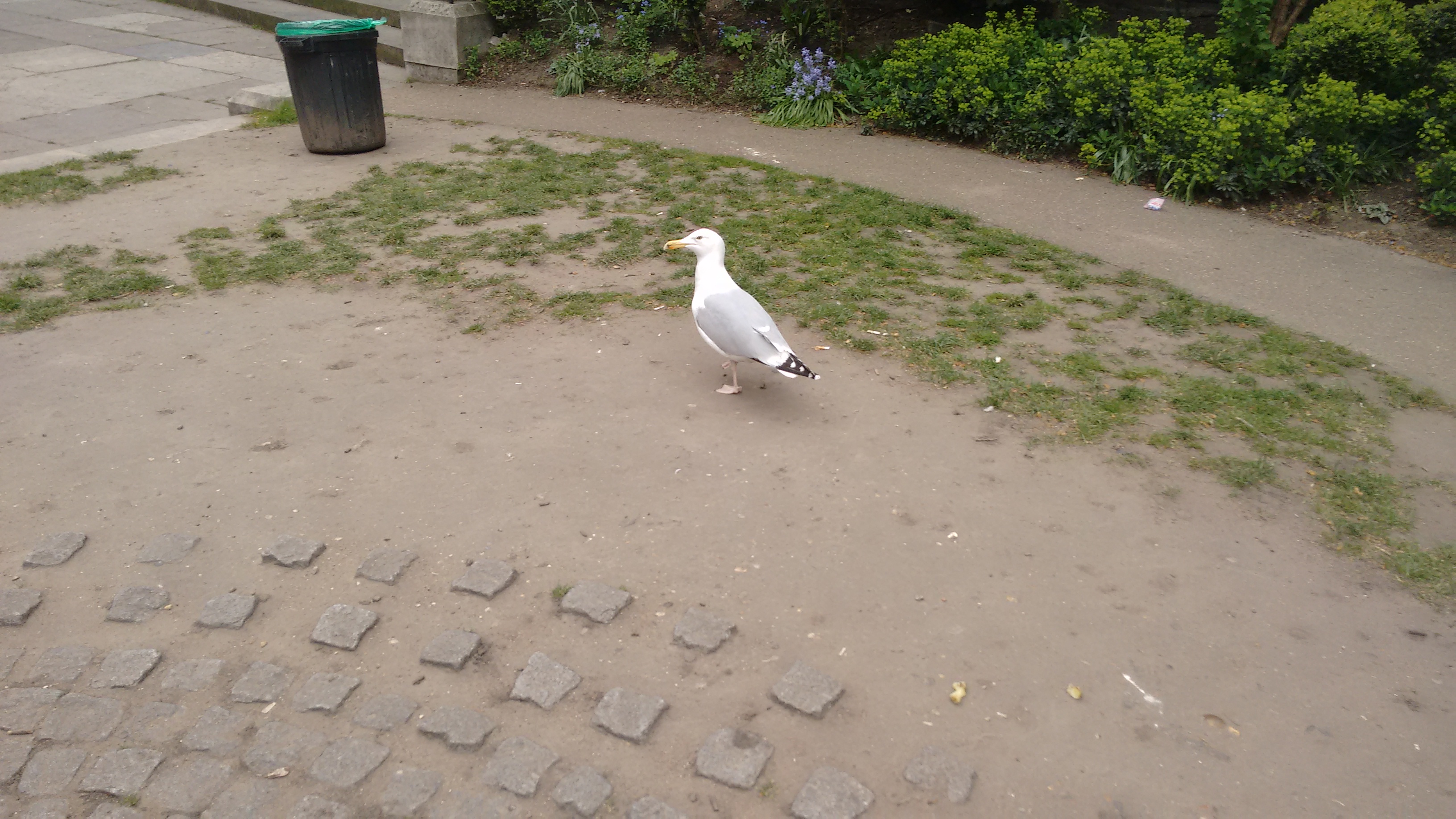 The HDR feature works very, very well – compare the detail in the bottom left corner (before, then after): 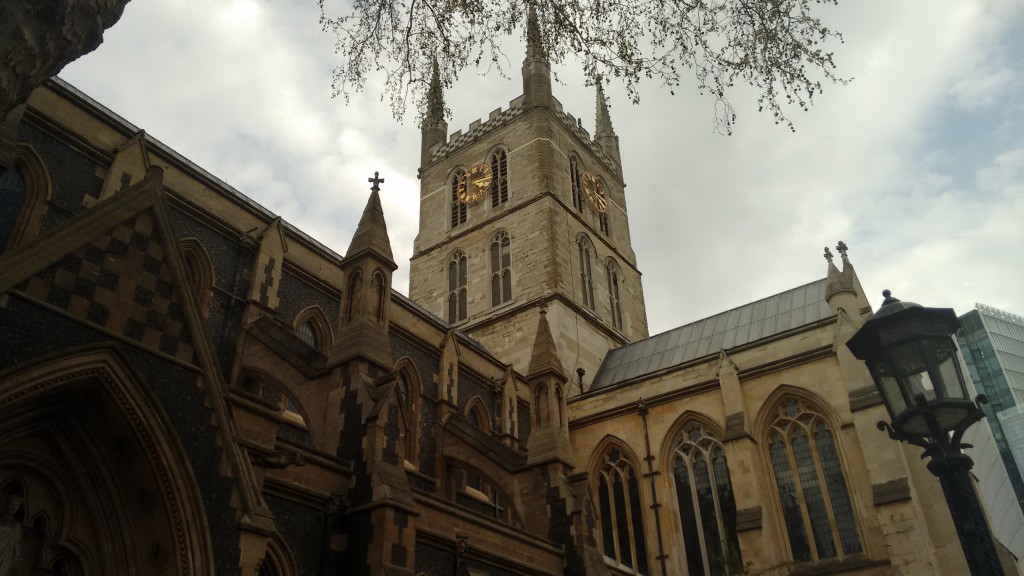 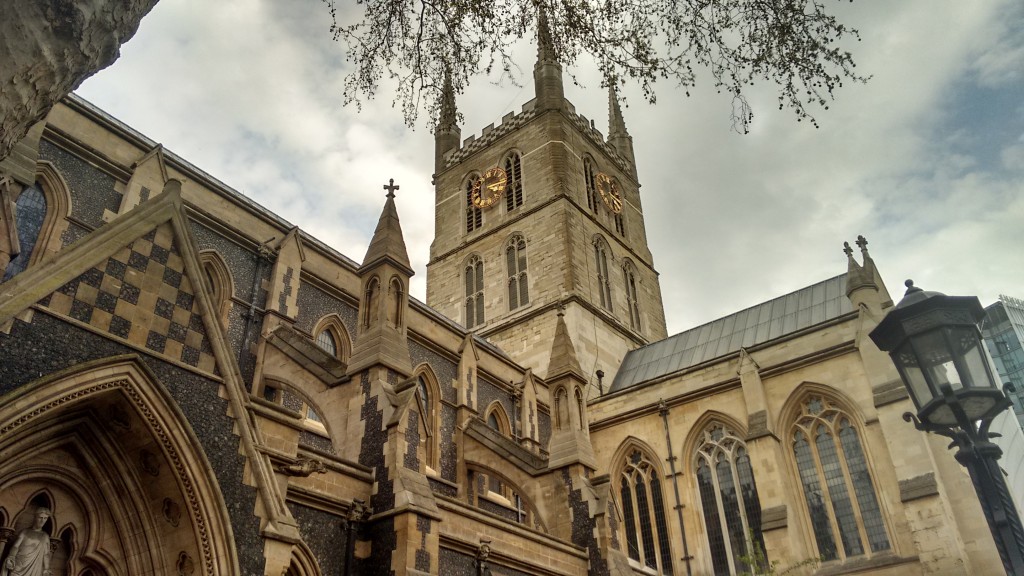 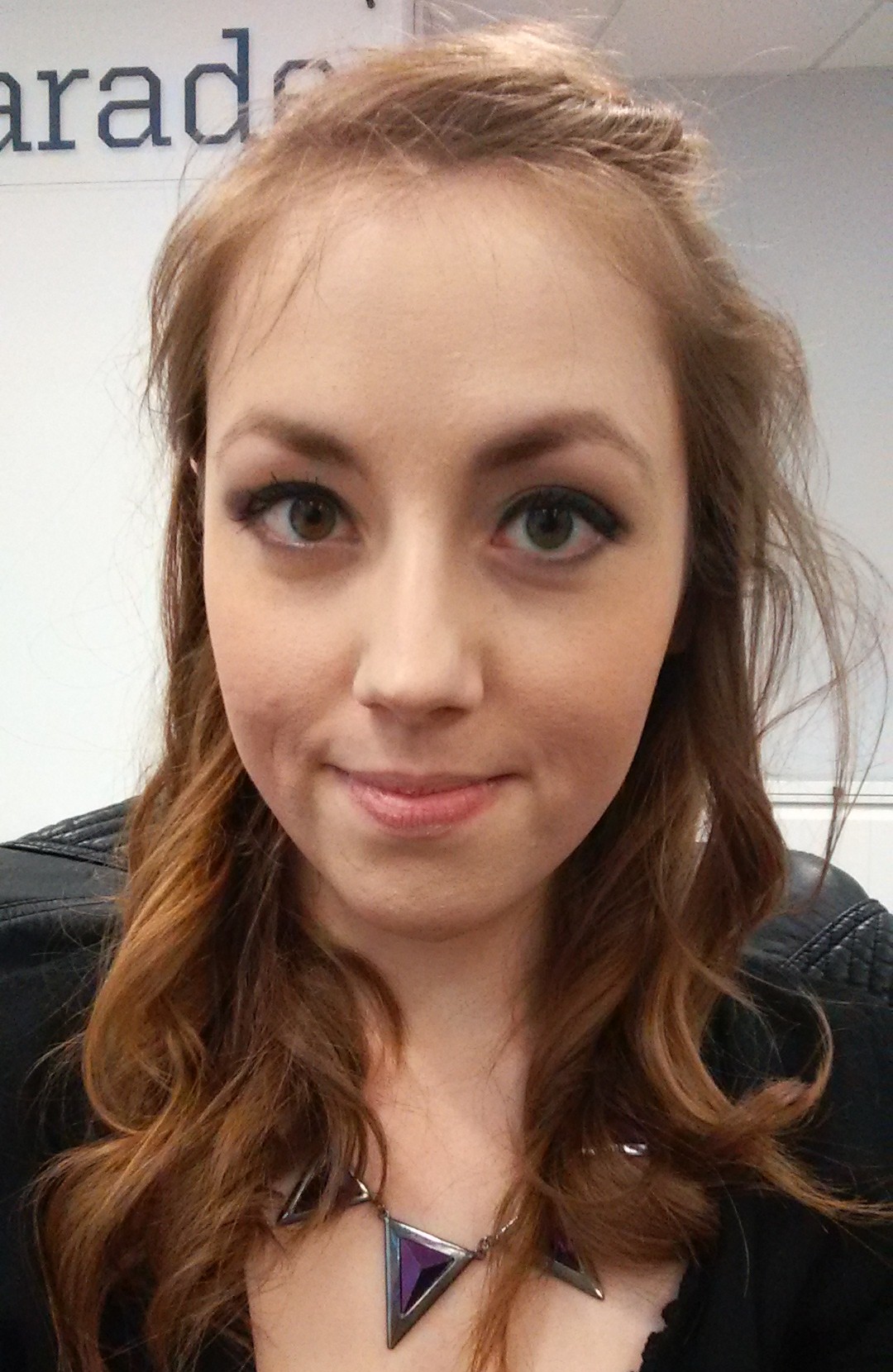 The battery has had a bit of a boost since the last edition of the Moto G, going up from 2070mAh to 2390. That’s still on the low side, but when flagships like the HTC One M9 and Galaxy S6 Edge are coming out with batteries in the 2600-region, it’s acceptable.

With everyday use, the battery gives surprisingly strong performance: on moderate-use days, it comfortably lasted the day, which is very unusual for a budget handset. If you don’t use your phone much as I do, you could probably get away with a day and a half’s use on a single charge, especially if you turn the brightness down – there’s an Adaptive Brightness setting in the Display menu that should help.

We ran our usual test of streaming a film over WiFi with GPS on and brightness set to max. After 2 hours, from a full charge the Moto G 2015 had 61% left. That’s a really good result for a phone at this price: especially considering Samsung’s S6 Edge had 54% and HTC’s One M9 had 50%. The 4G ASUS ZenFone 5, which is now available for about the same price, had 57%. A clear win for the Moto G.

As with its two predecessors, the Moto G 2015 represents one of the best-value Android phones on the market. It’s the perfect all-rounder for someone who wants something solid, dependable, and inexpensive. When my mum needed a replacement for her ageing Galaxy, I had no hesitation in recommending this phone, and she loves it. If I’d buy it for my own mother, you can be sure it’s a safe bet.

We’d have liked to see a sleeker design and a bit more RAM, but on the whole, this phone delivers on all fronts and still costs just £149. The upgrades from the last edition are useful, particularly the addition of 4G – so many contracts include it now that it’d be a significant omission otherwise. Overall, the Moto G 2015 is a reliable everyday Android that’ll keep you and your wallet happy.

You can buy the Moto G 2015 directly from Motorola for £149. Make sure you choose ‘4G’ from the dropdown, or you’ll get last year’s version! For contracts, compare options at Carphone Warehouse.