There are lots of smart watches out there for general fitness as well as for specific sports such as running and cycling. However the appropriately named Swimmo claims to be the first specifically-designed smart watch for both pool and open water swimmers.

True, there are watches available from Speedo and from smaller companies like the Swimovate which offers the excellent Poolmate series of watches (see here). These will count the number laps you swim and help you with your swimming workout as well as storing previous swims in the memory. However, these tend to be stand alone devices with limited ‘smart’ functionality. Swimmo, on the other hand, is – at least the inventors claim – the first to feature full smart capabilities, syncing (or should that be sinking!) with your Android or Apple iOS phone via Bluetooth.

Sadly, it’s not available to buy yet. But the inventors have just started a Kickstarter campaign to raise $39,000 in the next 34 days (a very modest amount – at the time of writing it had already raised over two thirds of its total) with the view to making the product available to backers in October. You can see the official project page on Kickstarter.com.

Like other watches from Swimovate and Speedo the Swimmo watch uses an accelerometer and gyroscope to calculate when you are turning in the pool so you don’t have to worry about counting lengths manually and will also work with any stroke. This information is then used to measure the distance you have swum. In Open Water mode – for example if you are swimming in a lake, river or sea – the smartwatch will learn from your previous training sessions about stroke length and use an algorithm to extrapolate this information in open water mode. This will prevent GPS disconnection problems and result in more accurate measurements, claims Swimmo. 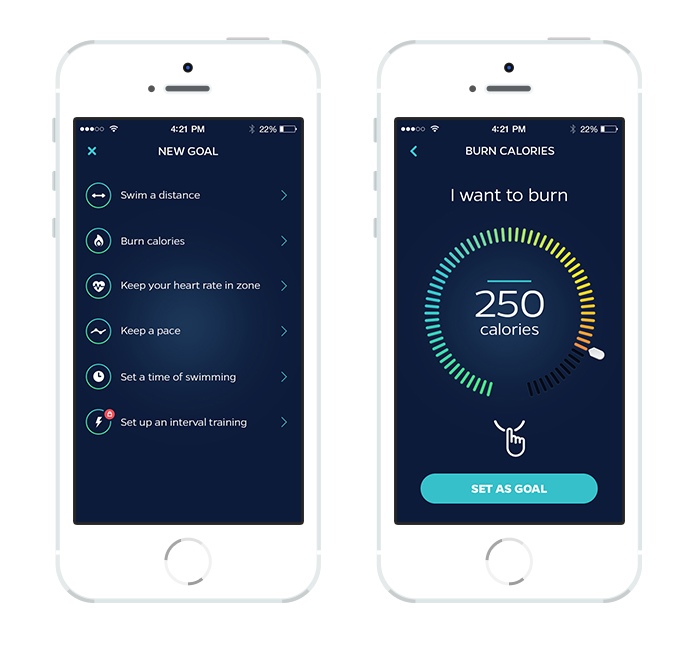 As well as being able to measure distance, Swimmo features a sensor that enables heartbeat recognition directly from the swimmer’s wrist.  Rather cleverly I think, the watch can communicate messages such as “slow down”, “keep the pace”, or “speed up” through variable frequency vibrations (I wonder whether it will be legal to wear under ASA regulations for long distance swim races where competitors need to set a certain pace?)

The device’s interface is displayed on a full-color OLED screen adapted to work under water and is designed for sharing results on social media and on popular sports websites, including RunKeeper.com. It also displays current date and time when out the pool!

Says Mateusz Heleniak, Swimmo Trainer Inc’s CEO: “There are many apps and devices that support the training of people who run or ride a bike. However, it’s not the case for swimming. The market lacks a solution that provides monitoring of swimming and improving one’s results. We experienced it ourselves and decided to change it.”