When IFTTT first became a big deal about four years ago (we wrote this beginner’s guide waaay back in 2011) I set up recipes for e v e r y t h i n g. All I had to do was take one photo and five different services published it, three new alerts were made and two other apps saved it somewhere or other. Of course this crazy pinging of content all over the place didn’t last long too, and I soon became to rely on IFTTT for just one or two things. The reason? Well, I was just overwhelmed by choice for what I could do. Lame? Yes. Was I alone? No. The IFTTT team has clicked that its service is probably just too damn good, which means they have to make it simpler and easier for us simple and easy folk.

Today on the IFTTT blog, the team has unveiled a whole suite of new apps, known collectively as DO. The whole idea behind the different DO apps – there’s Do Camera, Do Note and Do Button – is that recipes will be set up quickly and easily by simply pressing a button. 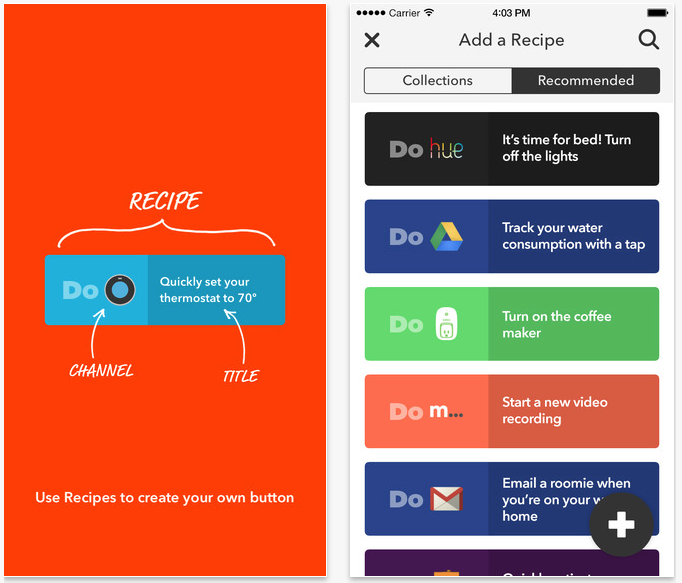 So let’s use Do Button as the first example, by installing this app you can set what the Do Button will… well… do. Look at the screenshot above. The Do button can be used to ‘turn on the coffee maker’ or ‘track your water consumption.’ So it’s like a completely customisable button that you customise by dragging and dropping stuff around. It’ll then sit on your home screen so you can press it whenever you want to do whatever it is you’ve set up to do.

Do Camera and Do Note are the same kinda deal, it’s just instead of pressing the button, you’ll be taking a photo or writing a note within the apps and customising them to send somewhere, start something, pretty much DO anything.

The brand has also taken a cue from Yo and has decided that more than two letters in your name is too many and it’ll now be known solely as IF, which seems kinda sad but is admittedly much punchier.

So do you think the new DO apps combined with the new super short IF rebrand will make the service appeal to a wider audience and have us making recipes for anything and everything? Let us know in the comments below.