If This Then That is an online service which has been invite-only for the LONGEST time.

Luckily the team behind it weren’t too stingy with the invites and most people who wanted to trial the service could have a go pretty easily, but now it’s an even simpler “sign up” process we imagine it’ll become increasingly popular because, well, it REALLY works.

Who is it for?

Before we go into what If This Then That (or ifttt for short) actually is, let’s start by explaining who it’s for.

The service has been created to make online life easier, to engineer it so it makes more sense for YOU.

So, if you only check your Facebook account and have a quick read of blogs now and again, then it might not be worth it. But if you have so many different social networks, blogs, RSS readers and random accounts here, there and EVERYWHERE it could well be a bit of a lifesaver. And that’s not even an exaggeration, information overload is like an actual “thing” now isn’t it?

What does it do?

ifttt is a task based service. You tell it what task you want it to carry out and it’ll put that task into action for you.

Tasks are all in the same format:

If THIS happens then THAT will happen.

It sounds rather philosophical, doesn’t it?

But we’re not talking if there’s evil in the world then there will never be happiness, or any kind of rubbish like that, instead it’s all about the interwebz, so something like:

If a photo is uploaded to Flickr (THIS) then a link to it will also be sent out as a tweet (THAT).

Triggers are the THIS bit, things that will start the whole process off.

Now there are a lot of different triggers you can choose from, like when I send an email, when I check-in on Foursquare, when I tag something in Google Reader. This list could go on and on.

Here are just a few of the channels you can play around with for your trigger: 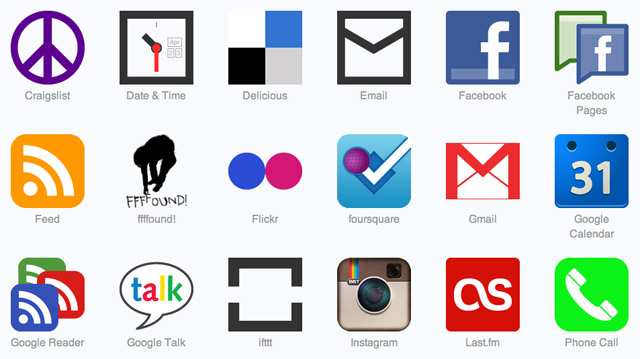 Actions are the THAT part, the things that will happen once there’s been a trigger.

These can be all kinds of things again, like send an email, publish a tweet, create a status update on Facebook and you can use all the above channels again, but as actions, not triggers.

So when you put a trigger (THIS) together with an action (THAT) you get a completed task.

If I upload a new photo to Flickr, then it’ll automatically be sent through to Facebook and saved in my photo album.

There are hundreds, even thousands of other combinations you can try, from organising your photos, sending emails, sorting out to-do lists, you just need to play around and find what works for you.

I personally use ifttt as a way to link up all of my photos so I don’t have to upload them to each social network separately, but I imagine different people will find all kinds of different uses for the tasks.

The main thing to remember is that, although you can add as many tasks as you want and they’re so easy to implement, you need to make sure you’re not over-complicating things. I can imagine some people setting up 6,495,394 rules, getting VERY confused and annoying all of their networks because everything is just getting republished and republished and republished.

So have a play around, try new tasks and if they’re not working just switch them off, nice and easy once you’ve got the hang of it.