Not two tin cans tied together with string, but pretty damn close – a Blackberry Bold, which they don’t even sell anymore.

So devoted to her favourite B’berry is Kim that she even buys spare handsets on eBay and hoards them for future use. ‘I like to have three in my room that I line up in case they break,’ she told the Code Mobile conference last week. And she doesn’t even have an endorsement deal with the brand, honest.

But while KKW wasn’t top of our list of suspected ancient phone users, she could end up being the unlikely poster girl for the upgrade backlash. Because we all know someone who uses an ancient phone – out of choice, misfortune or maybe (probably not) because they really enjoy all the jokes about bricks and Zack Morris from Saved By The Bell.

Here are the most common contenders…

It’s not that Kim K has never tried a touchscreen, you see. She’s actually a serial double-phoner.

‘I do have an iPhone, and I use it for photos. But if you write an email and you need to type fast — I like having the [key]board,’ she revealed at Code Mobile, giving many iPhone users cause to pause and remember the good times, the times when you could type a whole email without looking at the screen while running for the bus and eating a burger with your other hand, and not end up with a single typo.

Traditionally double-phoners have been either people with company phones that they’re not allowed to turn off, or people having affairs. But could carrying around a whole other phone just to take photos with be the double-phoning of the future? Or… hang on, didn’t we used to have a device you carried around just for taking photos with?

When Shosanna declared of Jessa in GIRLS, ‘she doesn’t really know how to text. She calls it a word alert.’ we all smiled, because we all have that friend.

That friend who has had to be dragged, kicking and screaming into the digital age from the floral meadow where their head normally resides. The friend who considers answering calls or replying to messages an optional extra, who haven’t used Facebook in three years because they found it crude and souless, and who will arrive at parties four hours late with a French man they just met at the bus stop. These friends have ancient phones.

They have ancient phones partly because they can afford to lose an ancient phone off the side of a canal boat, and don’t have to worry about smashing it during a particularly physical round of performance poetry. They also tend to have ancient phones because they don’t want to be part of the capitalist merry-go-round of endless upgrading, and because of the eco-impact – currently only about eight per cent of smartphones are recycled. That’s harder to argue with than the flaky texting.

Obviously it stands to reason that old phones would eventually gather just as much hipster kudos as Casio watches, monocles and bumbags, particularly as we’re now entering a terrifying era where something bought in 2002 can have retro charm. But hipsters are as likely to tout ancient phones for reasons of feigned nonchalance as they are ironic aesthetics.

A bricky Motorola says, ‘Yeah, I’m not really into like, our culture of insta-gratification. I just found this on the floor of a bar. I thought it would bring an honest quality to my interactions.’

‘Though sometimes the aerial does get caught in my beard’.

‘Hey guys, it’s your pal Unlucky McGee here! Dropped my phone down the toilet, please contact me on this number.’

‘Sorry to do this again, left my phone on top of a moving taxi! Please Facebook me or email for the time being.’

‘Me again! My phone was smashed against the side of a boat because somebody mistook it for a bottle of champagne. Whoops! If you need to get hold of me, send a note to my PO box or my mum.’

‘Worst luck! Accidentally buried my phone in a time capsule, hence this message being etched on the helmet of a flying space turtle. If you need me, try smoke signals.’

Unlucky souls have ancient phones because their new ones are usually lying under a train, or at the bottom of a well. And with 42 per cent of iPhone six users having already damaged their phones, there are a lot of unlucky souls out there.

With some 77% of over 65s now using a mobile phone, chunky vintage phones have taken on a whole new importance. There are specially-designed smartphones like the ‘Grandroid‘ and the Fujitsu Stylistic S01 aimed at the elderly market, but often it’s older, button models handed down from children and grandchildren that prove simplest to navigate.

The Nokia 105 has a battery life of up to a month, costs £18 and is reminiscent of our first teenage phones. It has no internet – but it does have Snake, naturally. 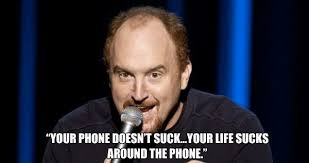 Cost, fragility and posing aside, there are plenty of people who just don’t believe in smartphones. While being able to communicate on the go is still probably, on balance, an advancement for society, it’s harder to argue that the constant demand on our attention presented by 3G phones is healthy and great. It’s like having a hungry baby bird in your pocket.

As comedian Louis CK so perfectly puts it when explaining why he’s anti-smartphones for his kids, ‘You need to build an ability to just be yourself and not be doing something. That’s what the phones are taking away, is the ability to just sit there. That’s being a person.’

Which means the perfect retort for anyone who gets teased for having an ancient phone is probably, ‘I’m just being a person’.