With thanks to Vodafone for the handset.

The Vodafone Smart 4 is one of the lower-end phones in the Smart 4 range, one step above the entry-level Smart 4 Mini. As with the EE Kestrel and most network-branded phones, it’s actually made by a Chinese manufacturer that isn’t widely known here: Yulong. The name might not be familiar to us, but the Yulong Coolpad line of smartphones is one of the most popular in China – frequently outselling the iPhone – and the Smart 4 is a rebranded version of the Coolpad 7576U model.

It costs £70 on pay-as-you-go (locked to Vodafone, of course), which is £30 more than the Smart 4 Mini and £5 less than the very similar Smart 4 Turbo, which has added 4G. It’s also not much cheaper than the widely-acclaimed Motorola Moto E. So what can Vodafone offer us that’ll make this handset stand out from similarly-priced efforts, some of which offer 4G on top?

The Vodafone Smart 4 feels a lot more expensive than it is. It’s weighty in the hand (152g), and while entirely made of plastic, the soft-touch texture of the rear feels more premium than gloss. Unfortunately, it’s spoilt by a Vodafone logo slap-bang in the middle of the back panel. Without that, it could have passed for a mid-range phone, no sweat. Face up, though, it’s indistinguishable from other black slabs – no branding, and nothing to give away the low price. 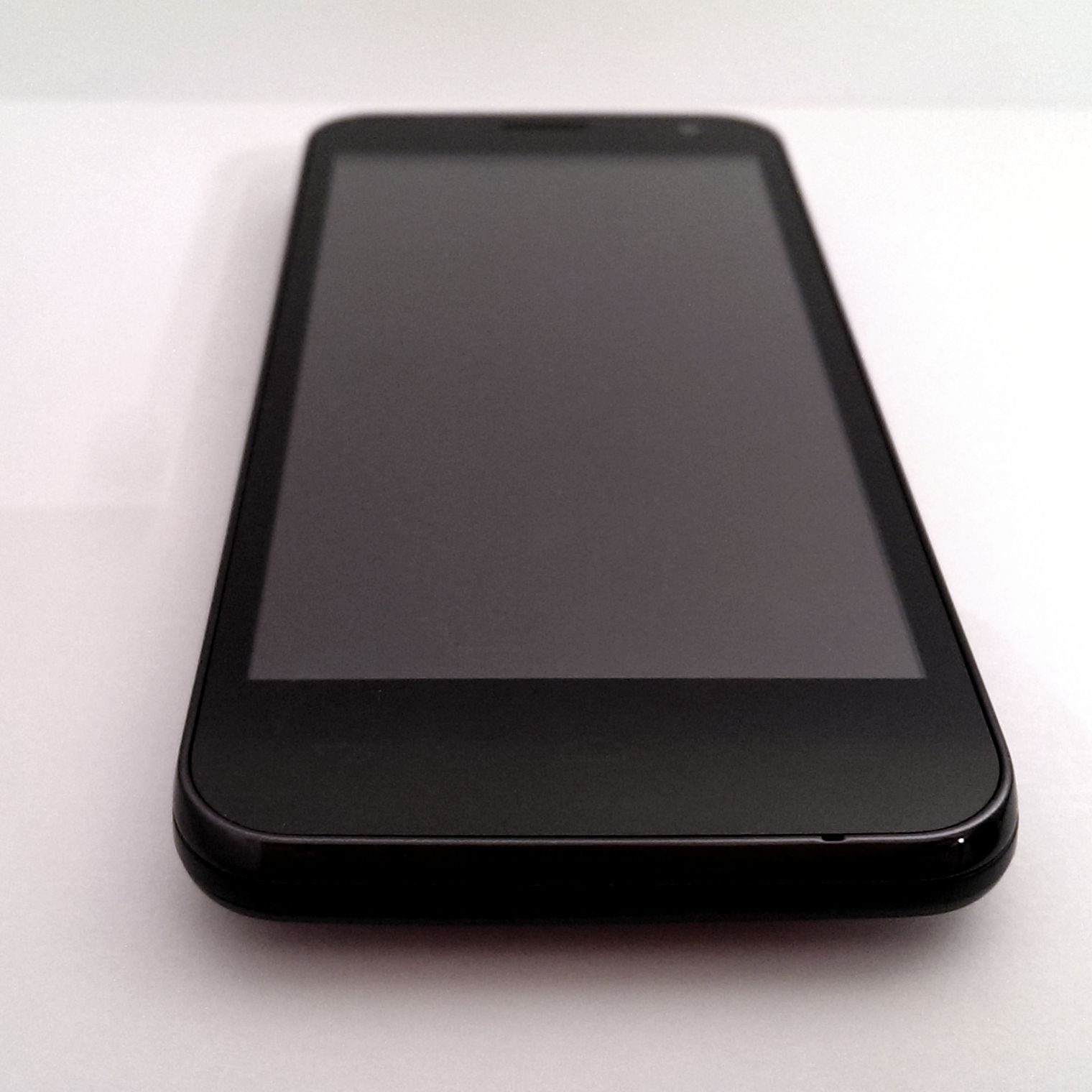 Vodafone say this handset comes in black and white, but the white option doesn’t seem to be available on their website at the moment. Despite the back panel popping off, there’s no option to buy a replacement in a more interesting hue, which is a shame. Even the £40 Smart 4 Mini had an accessory pack. Why the monochrome?

Still, snap off the back and you’ll find a removable battery, and slots for micro-SIM and microSD cards. The Smart 4 Mini takes a retro-tastic full-size SIM, so I was relieved to see that this phone is more mainstream. The microSD slot comes with the usual “up to 32GB” caveat, but you might well need all of that when the phone only comes with 4GB of storage. This is, surprisingly, the same as you get on the lower-end Smart 4 Mini.

Button layout is pretty standard: power button on the top right (where your thumb goes if you’re right-handed), volume rocker on the top left. As with most Androids, the volume keys can be used as shutter release buttons for the camera. The charging port and headphone jack are both on the top: I prefer a top-mounted headphone socket because it uses less cable when in a pocket or bag, so that’s good, but top-loading chargers are not my favourite. Plus while it’s on charge, the LED turns green as soon as the phone reaches 90% battery, which is confusing: green to me means fully charged. 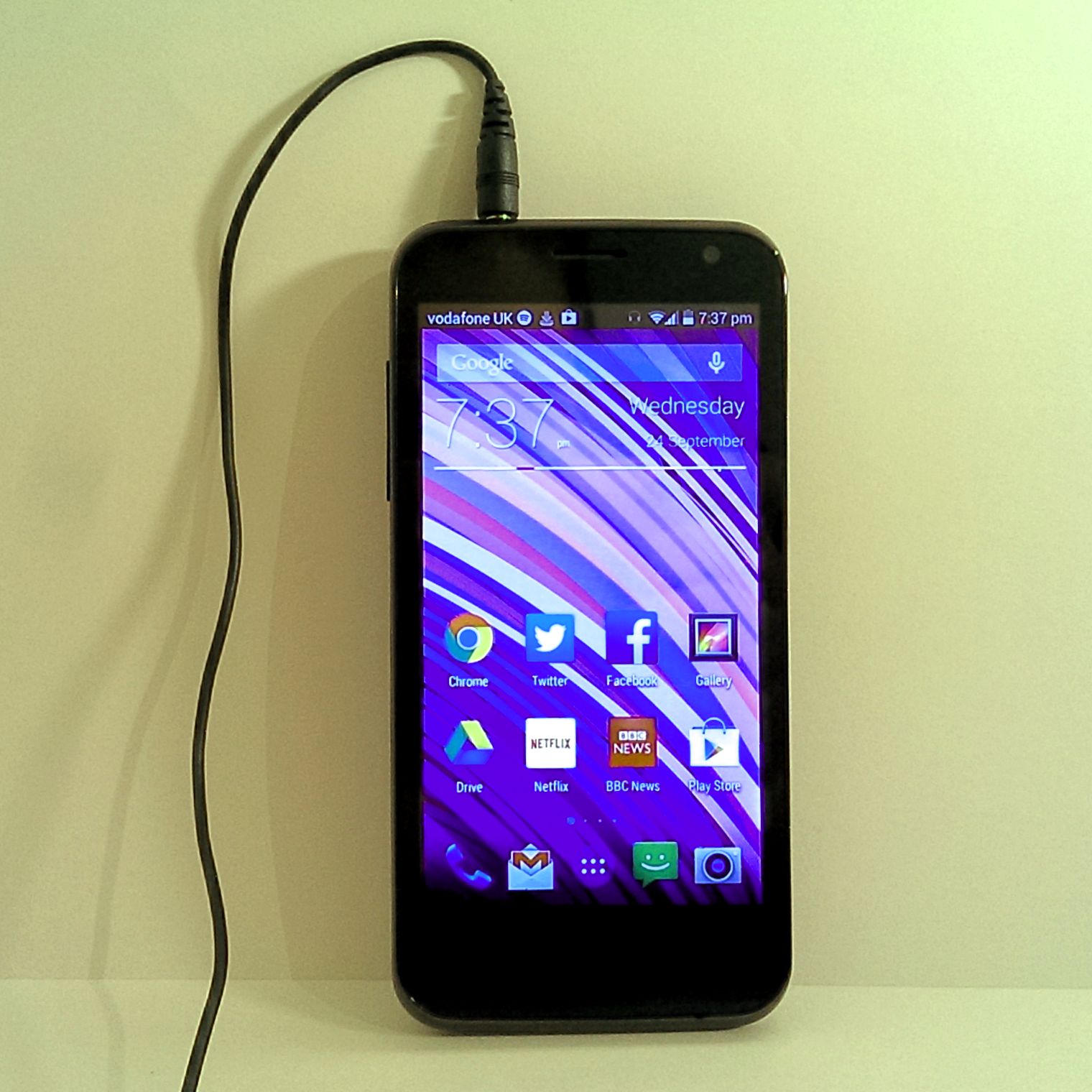 I’m not keen on the speaker placement: on the back, at the bottom. Otherwise known as the place the heel of your hand naturally sits, thus muffling the sound. It also means sound gets considerably worse when you put the phone face-up on a surface. But when it’s not hindered, the speaker is pretty good and doesn’t sound cheap or tinny. I’d have liked a couple more volume options at the top end, because it doesn’t go much louder than normal listening volume, but it’s good aside from where it is. 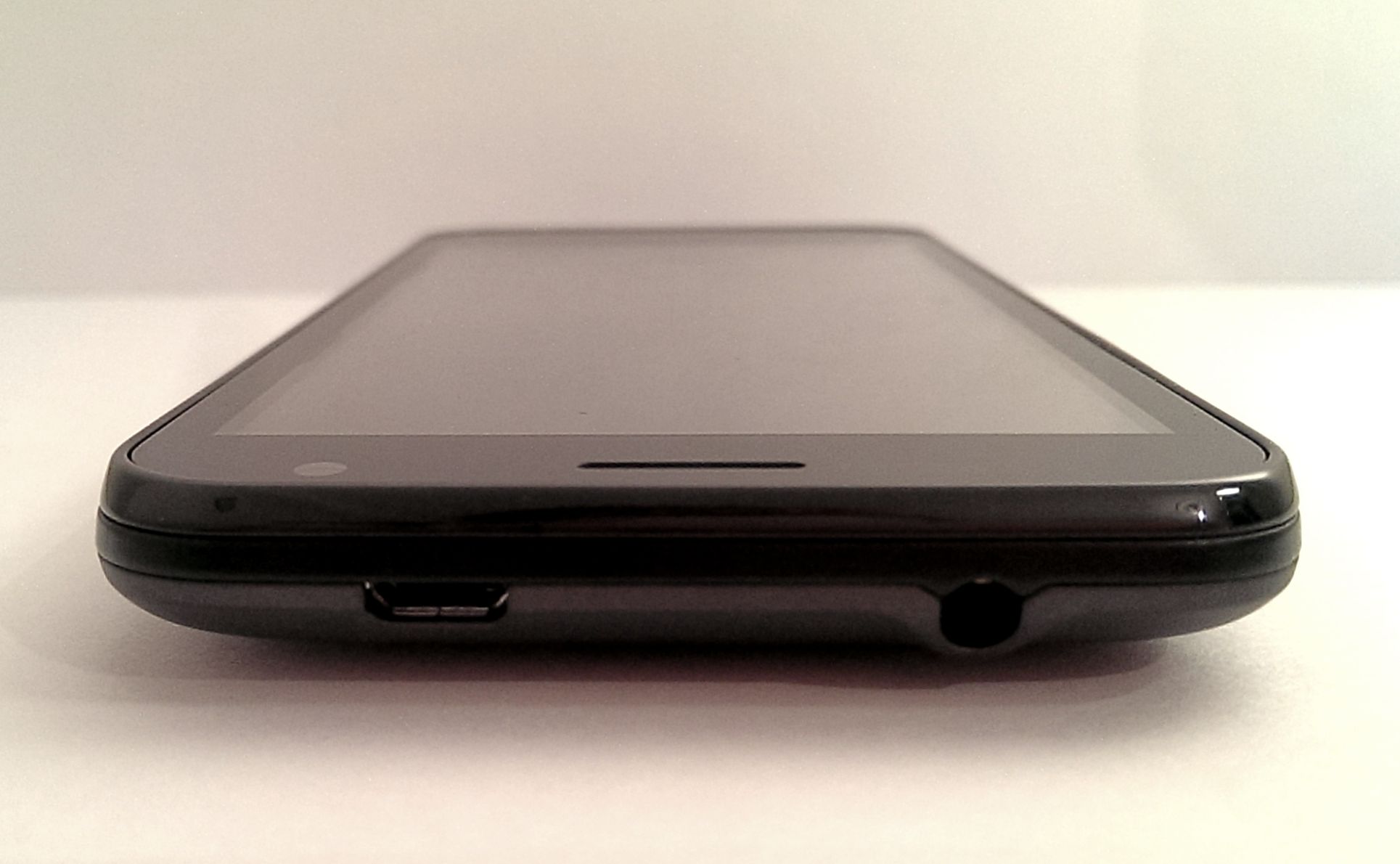 The Vodafone Smart 4 runs the latest version of Android, 4.4 KitKat. For a £70 phone, that’s a big bonus – many in the same price range are still on Jelly Bean. The usual smattering of Vodafone and sponsor apps and widgets are included at setup, but most can be uninstalled, which is great. If only all manufacturers were so considerate.

Aside from the apps and some very persistent tutorial-type prompts over the first day of use, Vodafone have mostly left Android to its own devices. Again, I appreciate this. The Smart 4 has the same odd home screen quirk as the Smart 4 Mini in that there’s a thick slice – even thicker this time – of home screen that you’re just not allowed to put icons on. It looks odd, doesn’t it? There should definitely be another row of apps below the time. 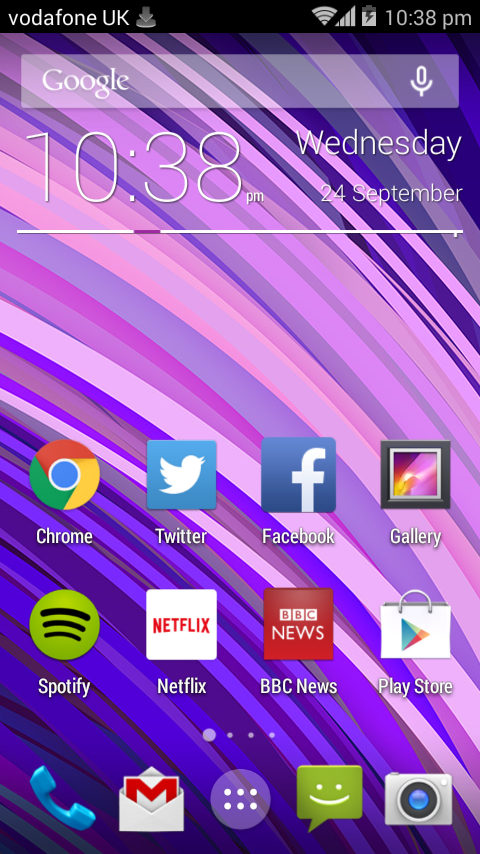 Remove that clock widget, though, and you can add another two rows. It just seems to take up more space than it needs.

I had to triple-check the specs on the Smart 4’s processor, because it’s actually slightly worse than the £40 Smart 4 Mini’s. They’re both dual-core, but the Smart 4 has 1.2Ghz whereas the Mini’s is 1.3. They’re by different manufacturers, though – the Smart 4 has a Qualcomm and the Mini’s is by MediaTek. Both come with 512MB of RAM, so no improvement there either for your extra 30 notes.

Performance was (unsurprisingly, then) very similar to the Smart 4 Mini. A bit of lag when opening and using big, intensive apps, a couple of incidents where the phone got confused or an app hung and had to be restarted, but mostly good and seamless performance. You’re not going to get away with any major gaming, obviously: stick to simple, 2D-style games (Angry Birds and the like) and you’ll be fine. For £70, you can’t ask much more.

It’s no surprise that the screen is surrounded by a thick black bezel with three soft keys – this is paint-by-numbers budget phone design. The keys have a (dim) backlight, though, which is often not the case on cheaper phones.

Icons look a bit fuzzy, but text is very readable and it’s more than good enough for videos and movies. It’s worth noting that the display has the same viewing angles quirk as the Smart 4 Mini, in that three out of the four ways you can turn the phone result in barely any change to the picture, while the other one is unusable. Bizarre!

The first thing you need to know about the Vodafone Smart 4 camera is that photos you take with it look a lot better once you get them off the phone. I did a double-take when I transferred the files to my PC – they’re so much more colourful and clear than they look on the phone screen.

That said, this is not a great camera. It’s OK, but still short of what I’d expect – even for £70. The Smart 4 Mini camera was also a disappointment, but I was hopingthe jump from 3.2MP to 5 might make all the difference.

As with the Smart 4 Mini, this phone has a fixed-focus camera, which means you can’t choose where you want the lens to focus. If the subject of your photo is blurry, there’s not a lot you can do besides moving around and hoping the phone will catch on. As with all fixed-focuses, I recommend taking the photo as many times as you can to try and get a good snap, because results vary wildly.

These two photos were taken within seconds of one another – the light had not changed, nor had the colour of the sky (which, believe it or not, wasn’t actually turquoise on a Wednesday morning in the midlands), but look at the difference between the colour of the trees, and the brickwork on the church: 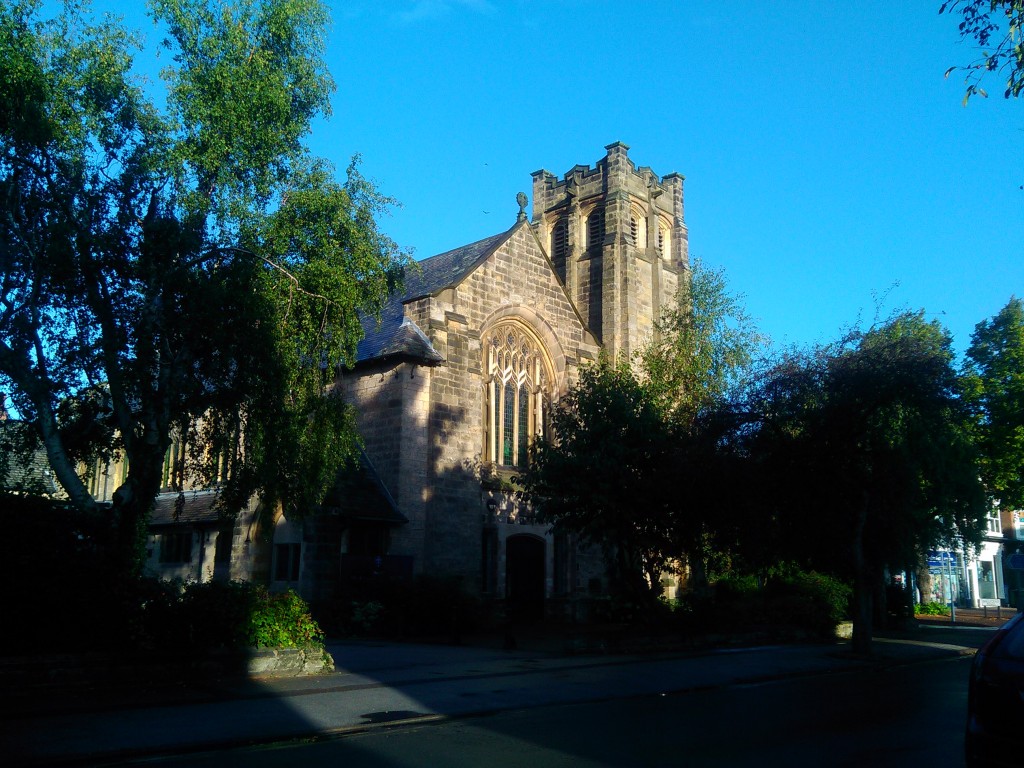 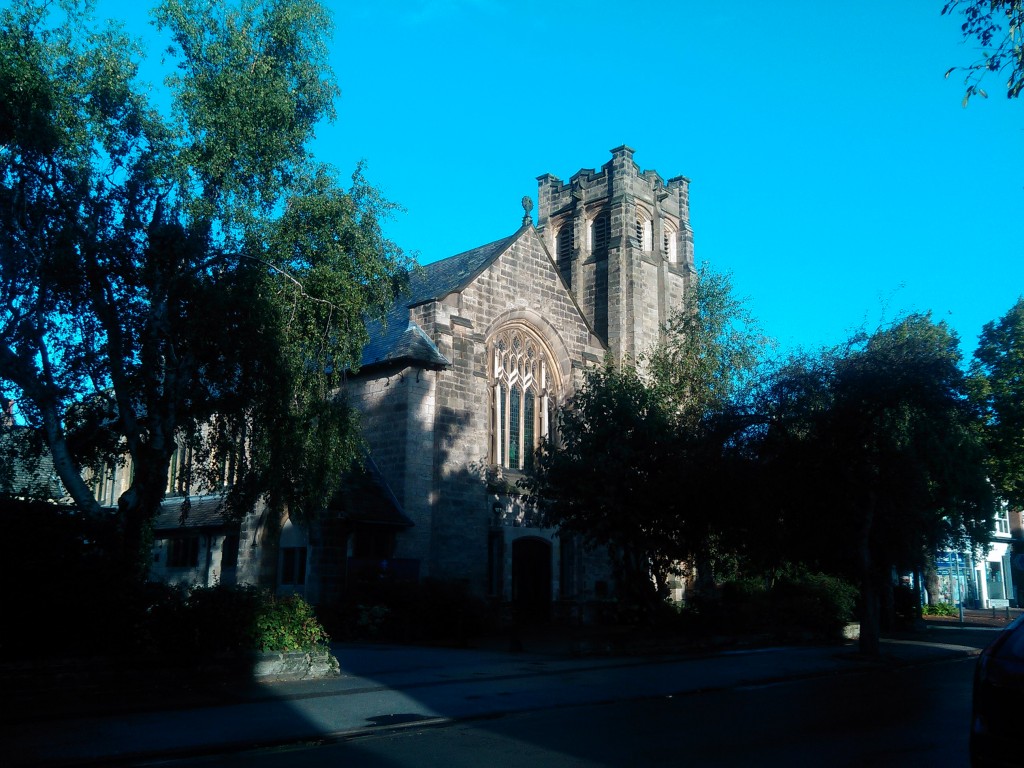 The Smart 4 does well at scenes flooded with light, but give it a bit of contrast and suddenly half of your photo’s in darkness (and there’s no HDR mode): 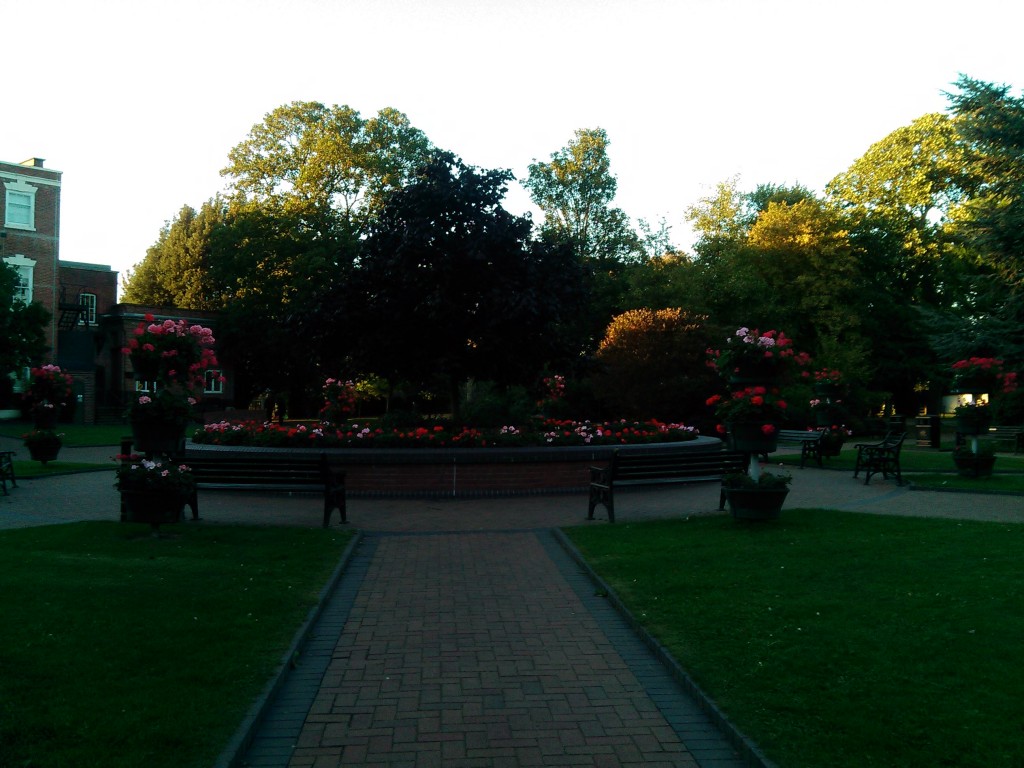 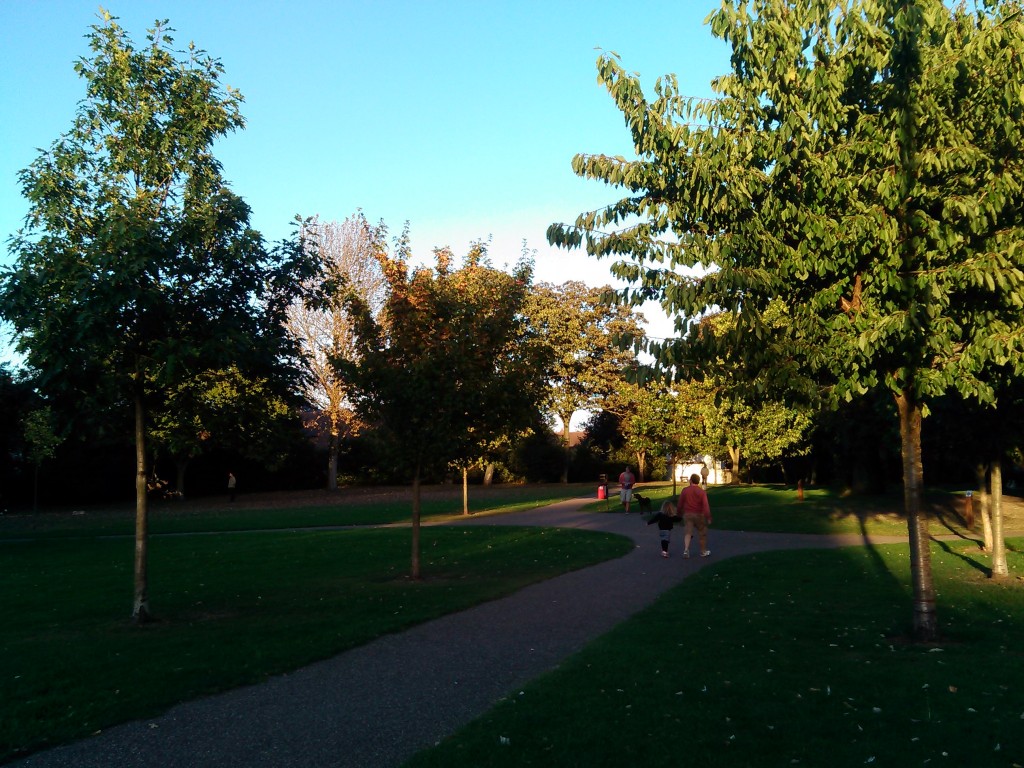 Colours are crazily oversaturated in some photos – and again, images vary dramatically. Look at the colour of the leaves! 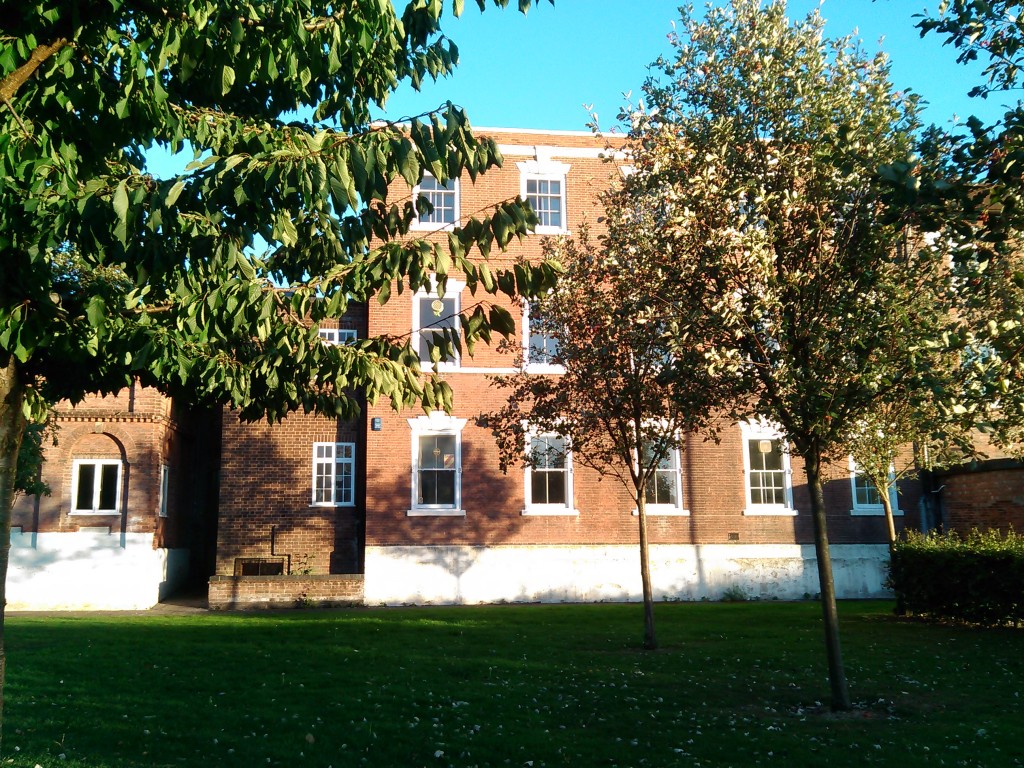 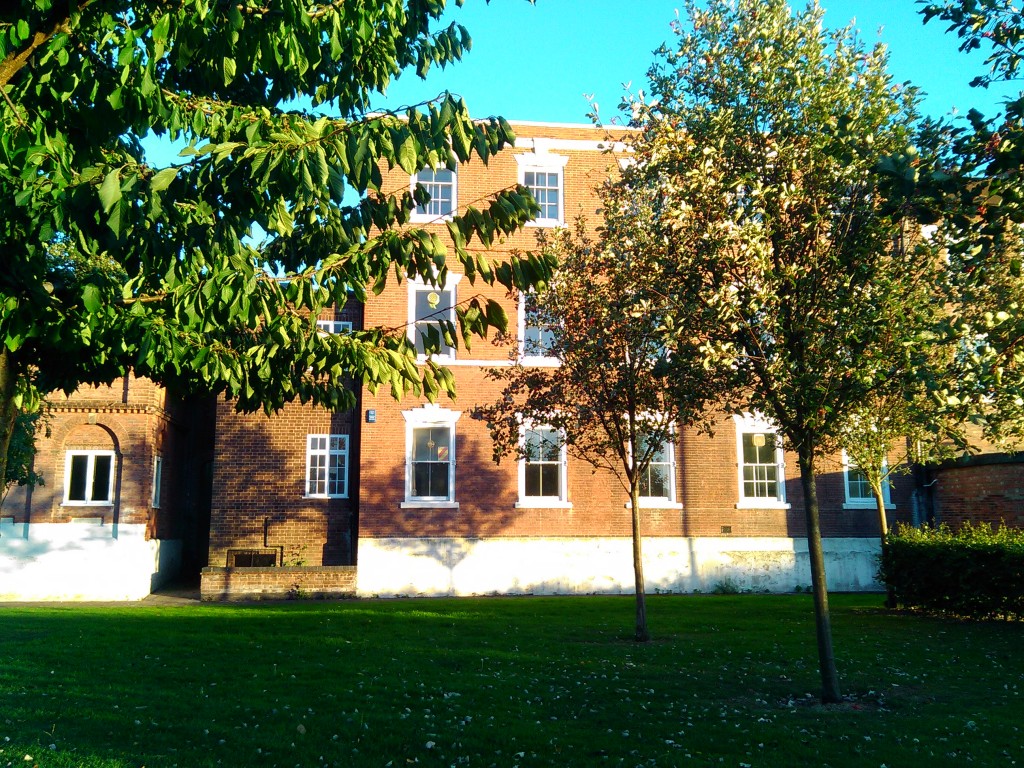 Maybe the tree just did a LOT of photosynthesis between snaps…?

Close-ups are basically a no-go, because the phone wants to focus in the middle distance: 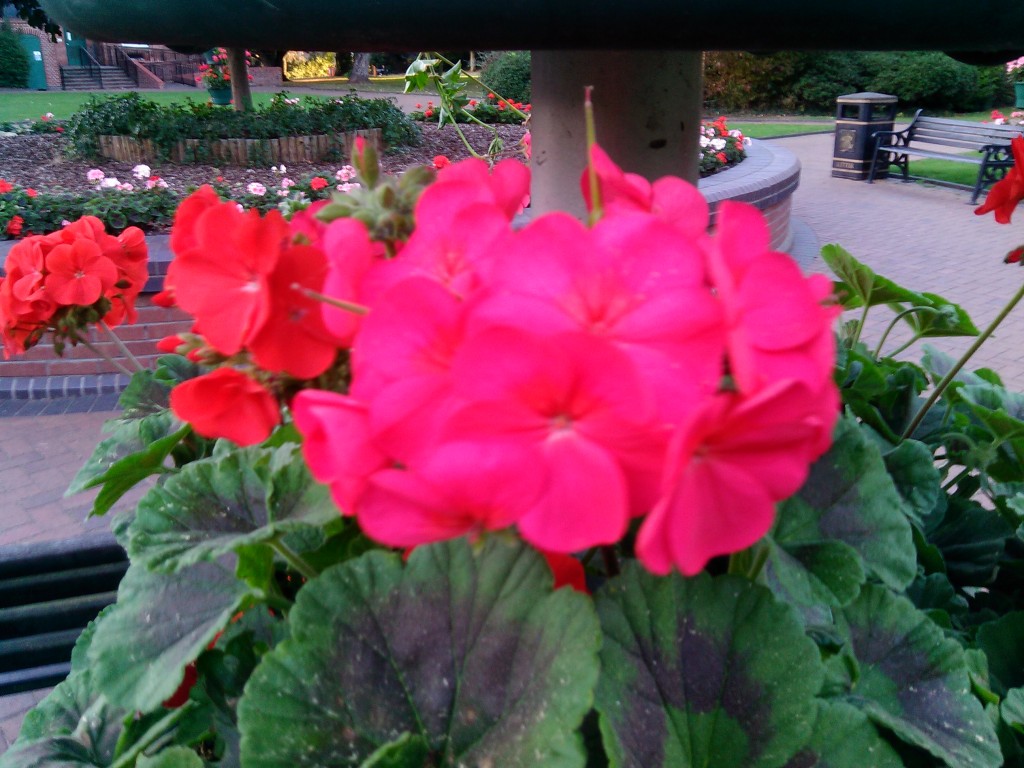 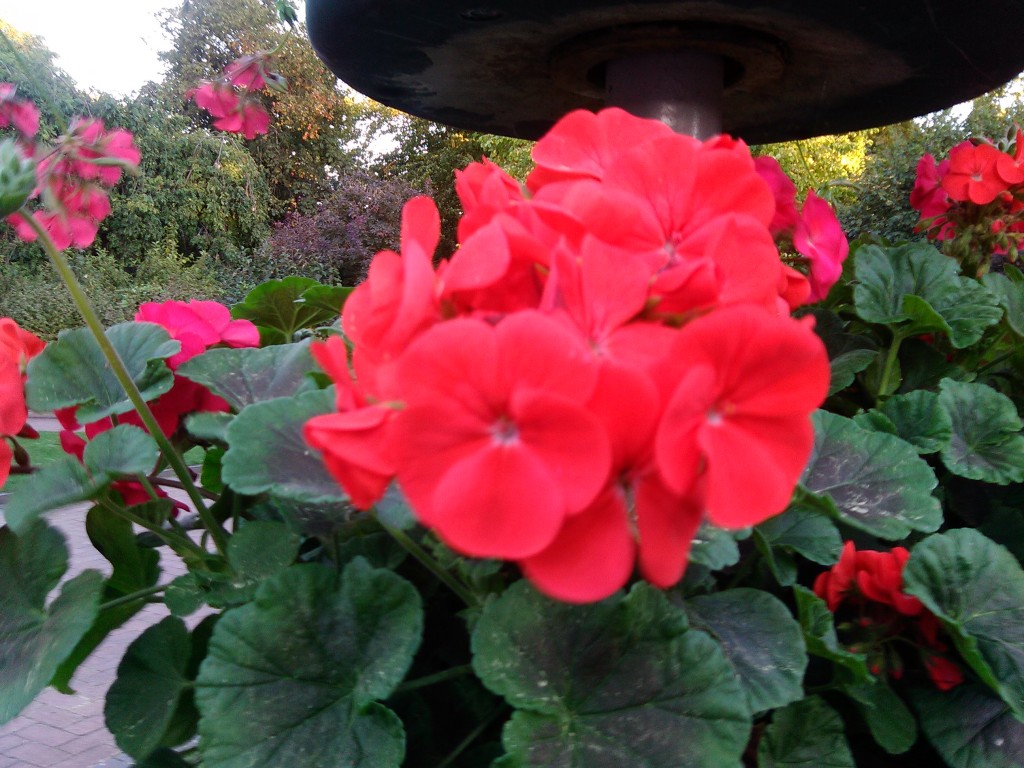 And low-light snaps? Not going to happen. There’s an LED flash, though, which helps.

It took me aeons to find out the resolution of the front-facing camera. It’s not mentioned on the website (but the main camera’s is) – I eventually found it hidden at the very, very end of the manual. It’s 0.3MP. The Smart 4 Mini didn’t have a selfie camera at all, so I guess it’s good to see one, but I’m not sure it was worth it. It’s nearly impossible to pose for a selfie indoors, because the screen and camera combine to make the darkest, blurriest, grainiest image you could imagine. When you actually take the photo, suddenly the quality magically improves and you can see your own face. But by ‘improves’… well, I’m not going to be using this as my profile picture any time soon. And this was the best of the bunch by a long way. 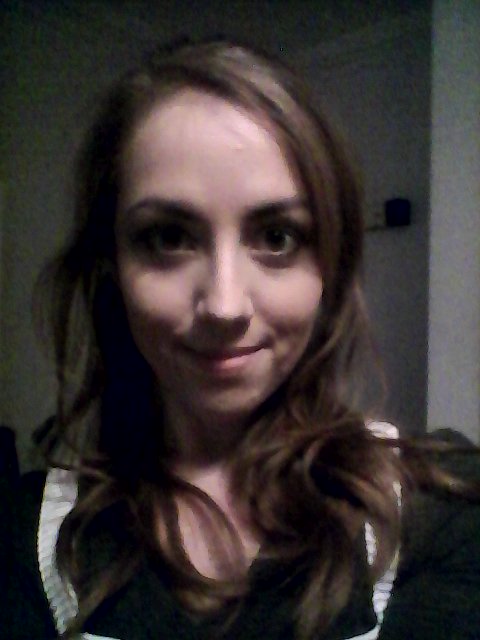 The selfie Vodafone shows in the Smart 4 promo video is considerably better: 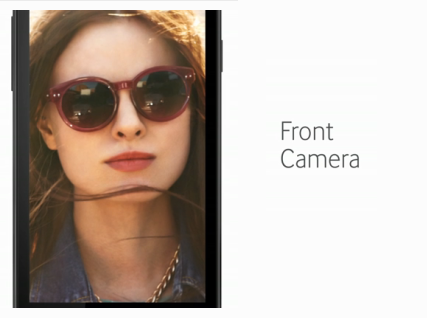 It’s probably just a stock image, because I don’t think that quality is possible with this camera.

On the bright side, the Smart 4 can record 720p HD video. You do notice the lower quality of the screen when filming, though – if the high-end Sony Xperia Z2 camera-and-screen combo is like watching your surroundings in a high-def movie, this is like watching them in a stop-motion film.

As we spotted earlier, the Smart 4 has a replaceable battery, which always gets a big thumbs-up from me. Battery issues are not uncommon, and having the option to switch yours for a new one without taking the whole phone in for repair is invaluable. Plus it means if you’re taking the phone on a long journey (hello, British railways), you can pack a spare battery for when the first one runs out of juice.

The Vodafone Smart 4’s battery offers 1880mAh, which is about par for the course in this price bracket. The EE Kestrel and Alcatel OneTouch Pop S3 both have 2000mAh, the Moto E has 1980 and the Microsoft Lumia 530 only offers 1430mAh. As we know, though, it’s not the size of the battery but its… erm… lasting power.

Terrible innuendo aside, I ran the usual ShinyShiny battery test on the Vodafone Smart 4: from 100% charge, with GPS enabled and screen brightness set to max, I streamed a film for two hours over Wi-Fi. At the end, the phone showed 58% charge. This means it actually performed better than its two 2000mAh competitors: the EE Kestrel had 50% remaining, and the Alcatel OneTouch Pop S3 had 48%.

This corresponds with my experience using the phone day to day: it lasts longer than you expect for the price, but it’s not going to change your life. It’ll need plugging in around bedtime if you haven’t been marathon-ing Netflix series, and earlier if you have. But you’re probably used to that already.

If you don’t take many photos and you’re not interested in 4G, the Vodafone Smart 4 is a solid choice for £70. It’d make a great ‘gateway’ smartphone for people who have been using the older type and need a smooth transition into the beautiful world of Android. There are a lot of instructions when you first turn it on, and the manual even explains that you should hold it like a landline phone – all of which suggests it’s aimed at older people and those unfamiliar with smartphones.

For everyone else, though, it’s difficult to recommend this when the Moto E is only a little bit more expensive with more RAM, a better screen, and yes, a much more attractive body. Still, battery performance and user experience on the Smart 4 are good for the price – it’s probably going to come down to whether you can live with that fixed-focus, super-saturated camera. So can you?