Just six months after the Sony Xperia Z1 hit the shelves, the Z2 bounded onto the scene with its bigger screen and beefier battery. It’s a fantastic all-rounder with very few drawbacks, but will it be outclassed by the next version before the year is out?

The Xperia Z2 handset feels very premium – perhaps not quite so much as the HTC One M8, but it’s definitely an expensive-looking device. The front and back are both Gorilla glass, and it comes in a choice of black, white and purple colourways. It’s the epitome of the slab form factor – a glossy rectangle with rounded corners and a completely flat back. This means it’s not particularly comfortable to hold, although it does look good. Compared with the more rounded, ergonomic shapes of its competitors, this is a much less comfortable phone to have in your hand. 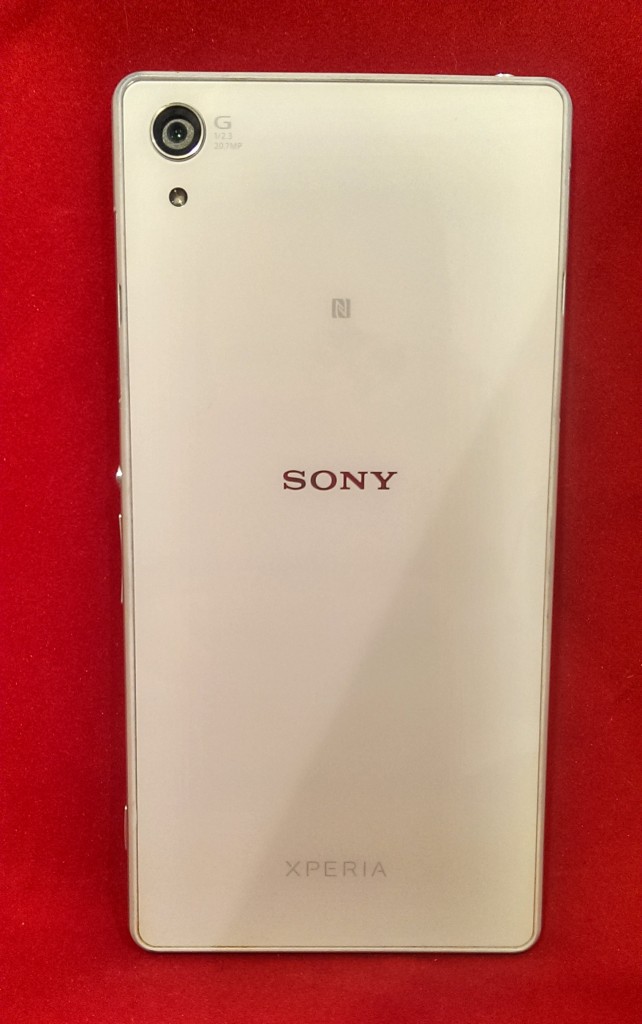 The 5.2-inch screen and sizeable black bezels make it larger than most, and at 163g, it’s not light either. This is the kind of phone you have to try out in person before you spring for it, because it’s just not going to suit some people.

A big selling point of this model over other flagship phones is that it’s waterproof – you can read a Kindle book in the bath without a care, and even take pictures while swimming (up to 1.5m deep for up to 30 minutes in freshwater, they’re quick to point out), because the vulnerable points on the phone are safely covered until needed. Unfortunately, this means the charging port is hidden behind a fiddly flap, which soon gets annoying when you need to charge it. Sony does make a magnetic charging dock which gets around this problem, if you’re willing to spend the extra £25.

At first, I found the placement of the power button equally frustrating – it’s a circular button on the right-hand side of the phone, about halfway down. Before long, though, you realise that it’s actually quite smart, because it’s exactly where your thumb is if you’re right-handed, or your index finger if you’re a leftie. The volume rocker is below the power button, which means screenshots are a slightly awkward affair, but again you get used to it fairly fast.

At the very bottom of the right edge of the phone is a dedicated camera button. This again is very smart thinking from Sony, because it’s in exactly the right place for landscape shooting – it’s right where the shutter button would be on a traditional camera. It’s also useful for taking photos underwater, because the touchscreen won’t work when submerged.

A very welcome addition to this handset is a pair of front-facing speakers – a feature I can’t help thinking they’ve nicked from HTC. But that’s no bad thing, because sound quality is substantially better with front-facing speakers, and these are slimmer and less intrusive than the One M8’s. They don’t go as loud or sound quite as good, but they’re excellent nonetheless.

As you’d expect, the Xperia Z2 runs Android 4.4.2 KitKat. Sony have tinkered with stock Android a bit, but not to any great extent – although they have added a fair whack of bloatware. The 16GB storage is depleted to 11GB when the phone arrives, so you’re more than likely going to want to exercise your option to add up to 128GB more via MicroSD. There are the inevitable Walkman and PlayStation apps, plus Xperia Lounge and a feature called What’s New that activates in the same way as Google Now, by swiping up from the home screen. There’s also a BlinkFeed-a-like in Socialife News, which intends to be your hub for news, articles and social network updates. Like BlinkFeed, it comes bristling with preselected sources, which it wanted me to switch off one by one – I quickly gave up and closed it for good.

Performance on the Xperia Z2 is excellent, which is not surprising given the Qualcomm® Snapdragon™ 801 2.3 Ghz quad-core processor and 3GB of RAM. Running lots of apps at the same time and switching between them was no trouble at all for the Z2, and I didn’t see the phone stutter or lag once during use. The inclusion of 4G LTE and Adreno 330 graphics unit add up to an excellent streaming and gaming experience, although it does get a bit warm during intense activity.

Sony have included some ‘small apps’ on the Z2, which sit over the top of anything else you’re doing (a bit like they would on a computer). So you can have a small, moveable, resizeable calculator on top of your spreadsheet if you like – but given how easy it is to handle multiple apps on this phone, it’s not really needed. You can access the small apps menu through the apps button on the bottom right. 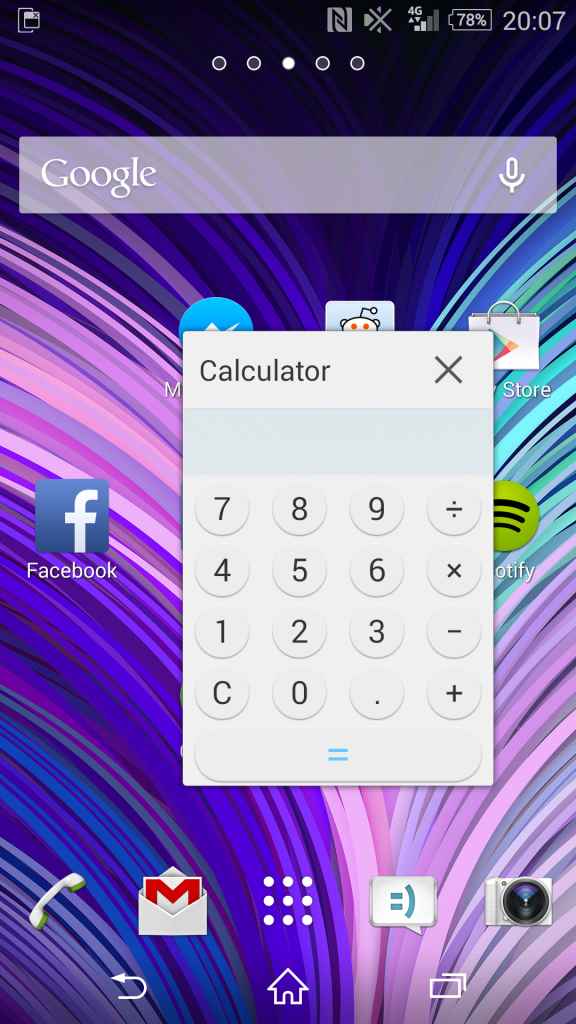 Another hidden feature is double-tapping to wake the screen (again, possibly cribbed from the M8) – bizarrely, this is switched off by default and has to be enabled under Settings > Display. Given that it’s a useful and popular feature on a competitor phone, I’m not sure why it’s not auto-enabled, because it’s definitely worth having.

You can see as soon as you pick up the Xperia Z2 that it has a beautiful screen. At 5.2″, the full HD display is a great size for games and films, and web browsing feels roomier than on other phones. Text is pin-sharp, colours are bright and vibrant (if a little oversaturated), brightness is excellent – except in strong sunlight, where the screen predictably becomes a fingerprinted mirror.

Sony describe the Z2 as having a “stunning high screen to phone size ratio” but I think anyone who’s had a look at those bezels would say otherwise. There is a lot of real estate on the front of the phone that isn’t screen. It’s forgivable, given the amount of tech crammed in, but probably not something Sony should be shouting about.

Viewing angles on this phone are extremely impressive – I turned the handset every which way during a film and the screen barely changed. Using the camera app actually looks a bit surreal, with the superb quality of screen and lens collaborating to make panning around look like watching your surroundings on a high-end TV.

It’s worth noting that the LG G3 has a quad-HD screen, so if resolution is a dealbreaker for you, that might be a better choice. But there’s not much here to dislike.

Sony have really gone to town on the Xperia Z2 camera. It packs an impressive 20.7 megapixels, 27mm wide-angle lens, extra-large Exmor RS sensor, and 4K video recording (four times higher than HD). Between the camera and the screen, photos and video look ridiculously good on the Z2.

There’s a whole toybox of options to play with in the camera app, ideal if you’re into photography or just love to experiment. There’s built-in Vine capability, numerous filters and effects, panorama function, timeshift video, and some quite bizarre augmented reality stuff that I’ve demoed in the video review. 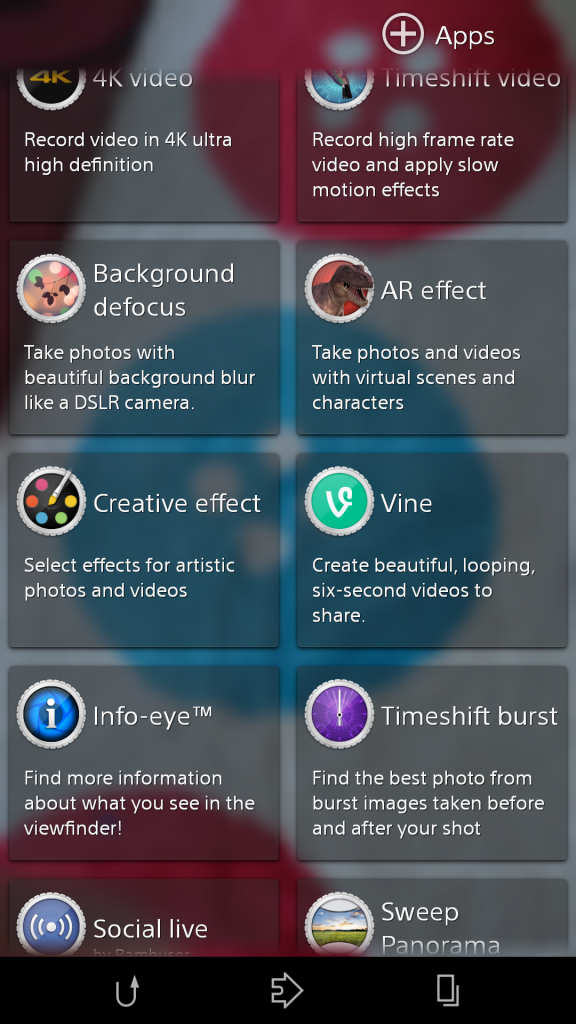 The two stand-out functions for me are Timeshift Video and Background Defocus. Timeshift Video allows you to shoot video at normal speed, then manually choose a section to render in slow motion. It’s really easy to add the slow-mo effect and define where it begins and ends – here’s a test video:

This would be amazing for something like a firework display or sporting event.

Background Defocus is similar to the refocus function on the HTC One M8 app, except that you have to enable the mode before you take the photo. This is a bit of a pain because it’s very easy to forget and just take a normal photo, thinking you can apply it like a filter. Nonetheless, pictures taken this way look fantastic – it really delivers the SLR-like effect it’s aiming for. Here’s the same vase of flowers with and without Background Defocus: 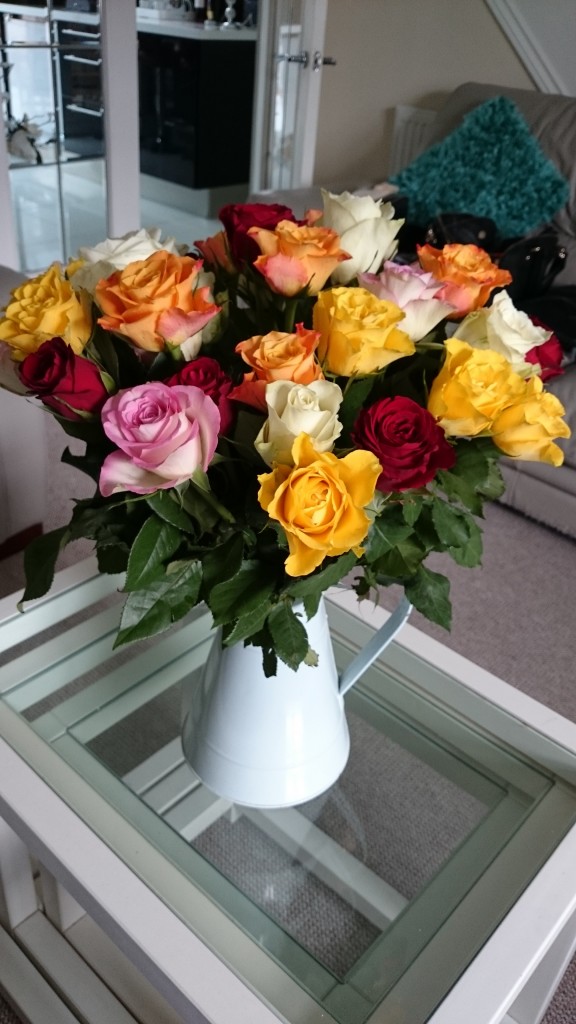 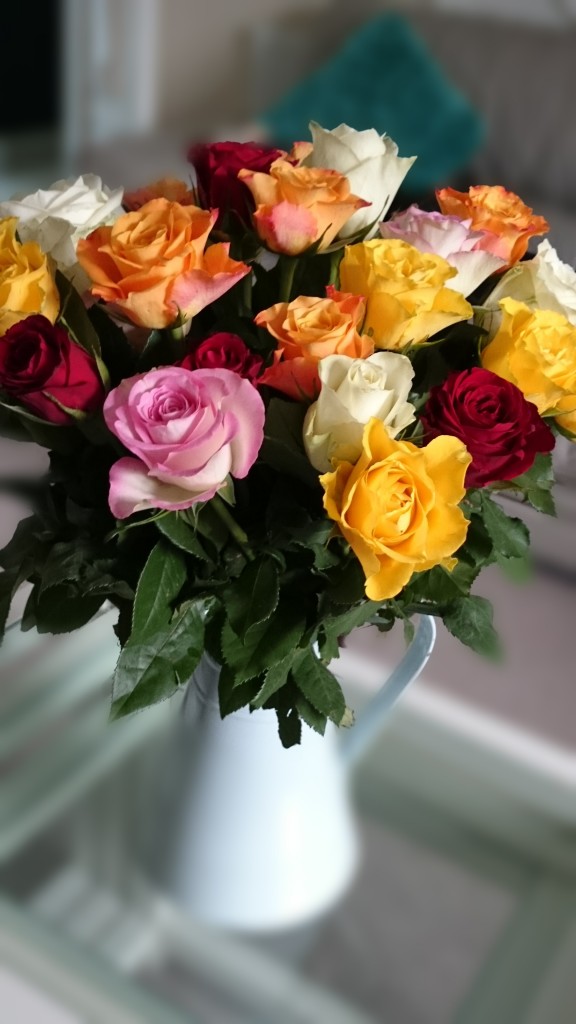 Less impressive is the front-facing camera, where Sony have sadly skimped a bit. It’s still decent at 2.2MP, but has an auto-enabled skin smoothing effect that makes you look like you’ve dipped your head in Vaseline: 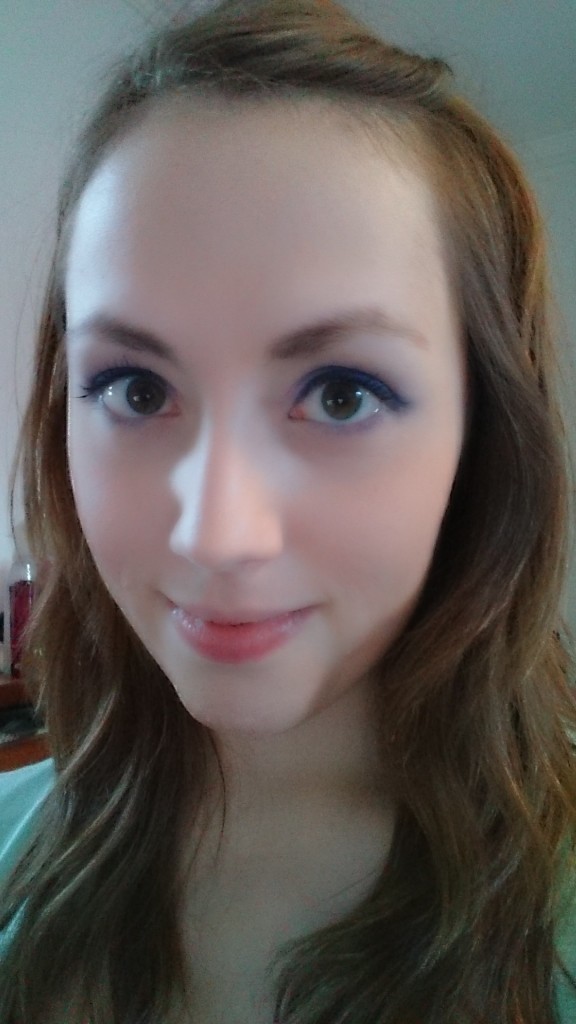 You can and should turn this off in Manual mode (it’s called ‘Soft skin effect’, which according to the manual gives you “enhanced beauty”. Hmm) but even without it, photos have a strangely ethereal quality. After the cracking main camera, this is a disappointment.

Also disappointing is the camera’s tendency to overheat. Many Z2 users have reported that after shooting 4K video for a few minutes, the camera gets too hot and shuts itself down (or worse, crashes), and I experienced the same problem when shooting images in bright sunlight. In fairness, it’s a very hot summer this year, but I still don’t expect my phone camera to be unable to cope with sunny photos – not sure it’d fare well at a barbecue!

Overall, though, this is a really excellent phone camera and leagues ahead of most of its competition.

It’ll come as no surprise after looking at the back of this phone that the battery is not removable by the user. This is another area where the LG G3 outstrips the Xperia Z2, but with most people happy to have an entombed battery as long as it works OK, this won’t be an issue for the majority.

And this battery works more than OK. It’s been given a boost since the Xperia Z1, from 3000mAh to an almighty 3200, and it’s one of the best smartphone batteries I’ve seen – to the point that it’s actually quite hard to exhaust the Z2. I ran the usual test of streaming a fullscreen film over Wi-Fi with GPS enabled and screen brightness turned up to maximum, and the battery depleted from 100% to an impressively high 78%. The HTC One M8, by comparison, dropped to 66% with its 2600mAh battery, so if juice is one of your top priorities, take this phone over the M8. The LG G3 and OnePlusOne are closer at 3000 and 3100mAh respectively, but Sony still wins on this front.

Despite the Herculean battery, the Xperia Z2 thoughtfully includes a power-saving mode called STAMINA. It disables functions you don’t need while your screen’s turned off, and you can customise what is and isn’t included. It’s a handy feature when you’re worried about the phone dying before you reach a power point, but I can’t see that happening often.

You know a review phone is something special when you instinctively reach for it instead of your personal handset. That happened constantly with the Xperia Z2, and I’d swap my beloved HTC One (M7, admittedly) for it in a heartbeat. It’s a bit of a pain to hold, but it looks great, the camera is top-notch and you can do this with it: 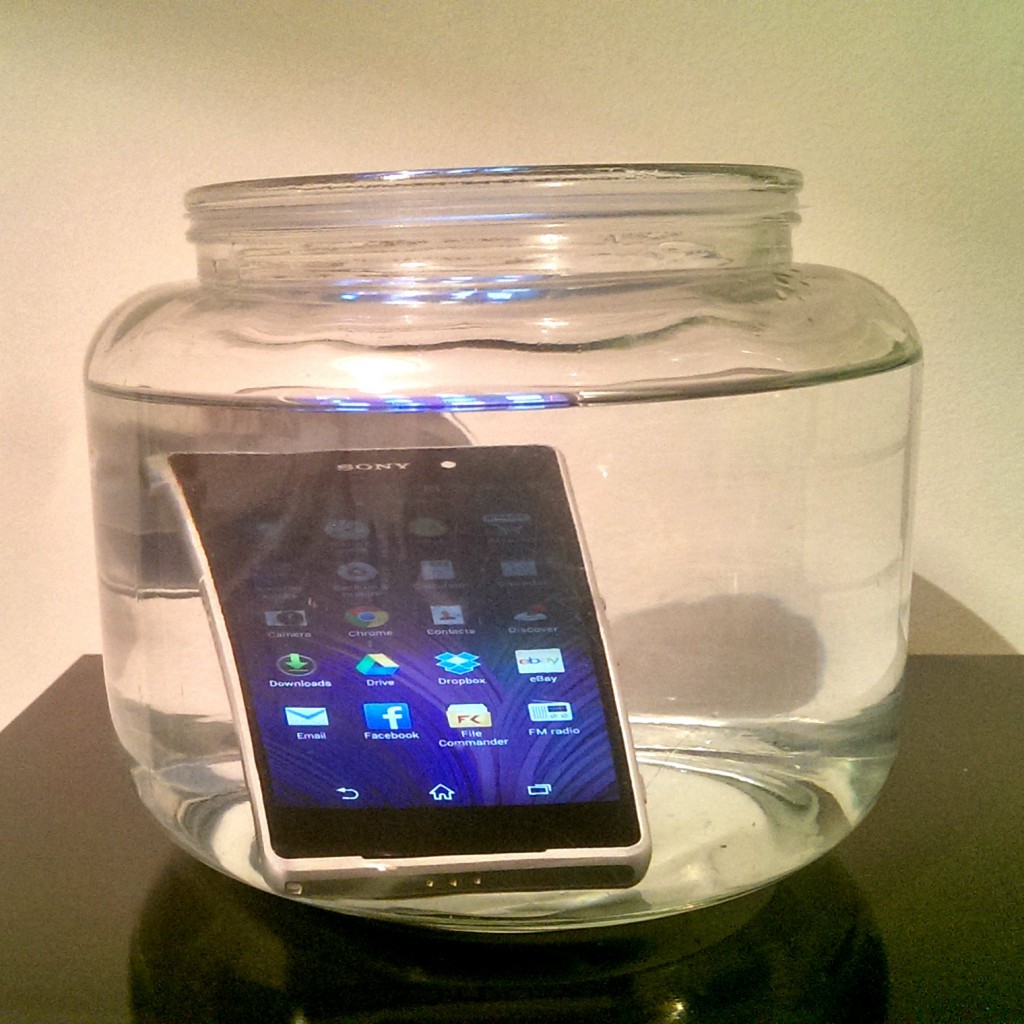 There’s a good range of accessories available, with wearables, noise-cancelling headphones (sometimes included, depending on where you get it from) and that magnetic charging dock all making the Z2 an even more attractive option. At just under £500 SIM-free, it’s very well-priced for everything it offers.

One point of caution, though – Sony has been churning out phones ridiculously fast of late, with the previous Xperia Z1 released just six months before this one. That means that although this is “The best ever smartphone from Sony”, the rumour mill is already buzzing with talk that the Z3 will be announced in September and released shortly after. If you’re the kind to kick yourself when a better, brighter phone comes out just after you pulled the trigger, hold back on this for a month or so. But be warned that you’ll have the same problem with the Z3 six months down the line.

Uncomfortable to hold
Flaps are fiddly and annoying
Overheating issues