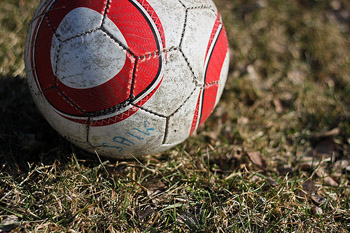 A Norwich City fan posted photos of the team’s new kit online ahead of the official launch date and the club responded by calling the police, which may sound extreme yet understandable, until you realise he got the photos from the club’s own website. Huh?

There’s been SO much debate recently about what we all can and can’t write online, whether it’s an insult about a celebrity (secret LOLZ) or photos from the Olympics.

In some cases it’s blindingly obvious why individuals have got into trouble for their silly words online, but a recent incident involving football fan Chris Brown has left us all a little puzzled. The Norwich City season ticket holder was browsing the club’s website when he came across images of the new (and soon to be launched) kit. Chris went on to share the images on Twitter and Facebook and got a lot of attention from other fans, who were re-tweeting and commenting on the new design.

It’s unclear at this point whether Brown knew he was revealing details ahead of the launch and how he even got his hands on the photos too. We assume he either hacked into some secret area of the site or an eager Norwich City employee had just uploaded them publicly a little too early.

“We are the guardians of the football club whilst we’re here and so we will protect our property.

“And our property in the digital age involves our intellectual property, so we won’t allow anybody to come in and take it from us.”

We get it, he blew their embargo or whatever, but calling the police straight away? It seems a little extreme, especially considering they have like, murders to solve.

It seems strange the club went straight to the police when a 17 year old fan clearly just got a bit over-excited AND regardless of how Brown got hold of the images, someone at Norwich City should still have to answer for putting them in a domain where a fan could see them in the first place.

All of the details of this specific case are a bit blurry, but it does raise some interesting issues about whether rules regarding intellectual property are the same online as they are offline. Obviously they should be, but it’s much harder to enforce, figure out who’s really to blame and decide whether to involve the police or not.