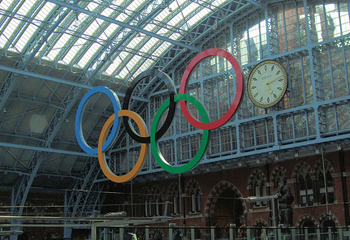 The Olympics taking place in London later this year are set to be the first to really make the most of social media, but in actual fact both participants and fans could be prosecuted for sharing photos online.

We’ve read countless articles over the past few months about how this year’s London 2012 Olympics are set to REALLY take advantage of social media activity, with online insight from athletes, a dedicated athletes hub, plenty of chance for fans to have their say and exclusive behind-the-scenes action as well as much more (take a look at this interview with Alex Huot, the International Olympic Committee’s (IOC) Head of Social Media, over on The Next Web).

However, it seems there’ll be a whole host of online rules that both athletes and fans must adhere to in order to avoid getting into trouble, according to a recent article on Mashable.

Technically athletes won’t be able to post any photos of themselves with products that aren’t officially sponsoring the Olympics and no content from the official athletes’ village can be shared at all. Fans may be restricted from sharing any kinds of photos and videos taken from within the games and even business owners could face serious consequences if they lure anyone in with any mention of the event, even if it’s a local pub with some kind of Olympic 2 for 1 drinks deal. Is it just us or does it feel like we’re all suddenly characters in a slightly cheerier version of Nineteen Eighty-Four?

Of course we doubt there’ll be a crazy online policing team sifting through ALL OF Facebook and ALL OF Twitter for offending photos (Ministry of Truth, anyone?), but it’s a little strange to hear sharing might be restricted when many of us are so used to recording videos, taking snaps and writing about what we’re up to 24/7.

The fact many business owners can’t take advantage of the Olympics seems a little strange too. A recent report in The Guardian detailed some of the acts in more detail and suggested that not only does it seem particularly strict toward small businesses, but it could well affect the economic benefits the games have on the capital.

We’ll keep you updated about what the restrictions will actually mean to you over the next few months.

One thought on “WTF: Posting a photo from the Olympics could get you prosecuted”