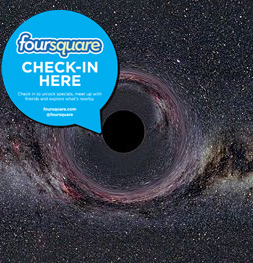 On a recent trip to New York – I noticed Foursquare stickers on the windows of literally every independent coffee shop I walked past – check in here! etc, but if the service isn’t dead in London, it’s on life-support at the least.

Of course we predicted this when Facebook Places came out in August last year, but it’s still worth pondering the fall of this mobile location giant. And wondering whether it will ever pick up again – it’s definitely possible: a deal with American Express have breathed new life into their American branch and they picked up a bunch of funding recently as well.

But in the UK, it seems like the momentum has all but ebbed away.

On a quick informal poll of check-ins at various services with Ashley’s friends on both we counted:
– 5 check-ins on Foursquare in the past week – out of 40 friends.
– compared to 20 in last two days on Facebook Places

Four quick reasons why its fortunes took a hit:

1) Foursquare itself
That game incentive built in makes for rapid uptake but gets stale within weeks. There are only so many badges we need in our lives.

2) Facebook Places is better for showing off
If I want to boast about where I am – I’ll do it on Facebook because then everybody will see it.

3) Groupon is better for local deals
Foursquare deals have been very few and far between. Especially in the UK.

4) Yelp/Google Places are still better for local tips
I’d still google a place/area first rather than fire up Foursquare..

However, a couple of tweeps claim they do still use the service. For various reasons… 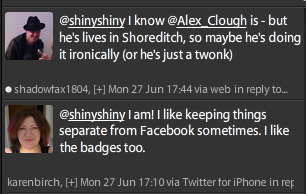 Do you? Comments plz!