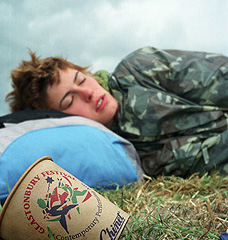 Glastonbury has got us all thinking about spending time outside lying on the grass, listening to sweet tunes. And if that means lying out in your back garden, so be it.

And especially if you chose to take your music while lying in in your back-garden, you’ll want a decent set of outdoor speakers. Which is why we got all interested in some wireless speaker technology BestBuy demoed to us last week. Basically it uses radio frequency to send uncompressed audio from your device to your speakers, wherever they are, allowing you to pump music out from your PC to your back garden, to take one useful example.

BestBuy have patented some music-sending technology which cuts the wires out of the speakers which means that you can put your speakers wherever you want and play music from them.

Because there are up to five inputs and eight outputs, another fun use would be sending music from one device to all the different rooms in your house. It would make your house kind of like a supermarket. It would be a bit wrong, but you could do it.

BestBuy’s senders and receivers are compatible with all speakers and devices. Admittedly though they are pricey. Quick run-down of the pros and cons…

The upside
– get rid of those damn wires!
– clear uncompromised sound
– compatible with your existing speakers and computers.

The downside
– the price: these are expensive. Though about the same as a Glastonbury ticket
– these speakers work best if you have a stationary device (your TV/PC) with portable speakers, rather than having portable music player (like an iPod). For me this would be a little redundant because I carry my iPod around anyway and just need the speakers to move.

It also enables their back-garden-friendly waterproof speaker, which we like a lot. The complete kit, with the mini sender/receiver and the speaker will set you back £180..

The music bit? The sound is uncompressed which makes for high quality without the wires. The Best Buy reps swore blind that it wouldn’t suffer from interference from any other device using that frequency:

“Rocketboost wireless audio products support HD-quality audio without wires. The wireless signal from a Rocketboost-branded transmitter is uncompressed and can transmit 24 bit, 96 KHz digital audio, which supports CD- and HD- audio signals such as Dolby TrueHD and DTS-HD Master Audio. Additionally, Rocketboost wireless audio products operate in the 2.4GHz band and are designed to work without interference with other 2.4GHz devices such as wireless routers, cordless phones and microwave ovens.”

The four Rocketboost products from Rocketfish are currently available from all Best Buy UK stores and at www.bestbuy.co.uk/rocketfish