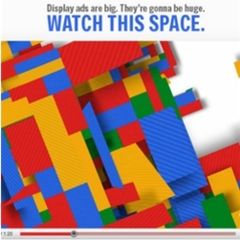 Google predicts a tenfold up-swing in online advertising over the next few years, the VP of Google Advertising told the Financial Times today.

Google expects online display advertising will zoom up from being a $24bn industry currently to a $200bn+ industry by 2015, said the Google VP Neal Mohan.

Note – it’s far from just display ads though – another area expected to boom is video advertisements pasted in before editorial video – especially as internet and TV converge – and mobile advertising is expected to grow significantly as well.

One Google tool that could revolutionize online advertising is the automated ad-buying machine they have been demo-ing out. Called Double Click Ad Exchange, it’s like a stock market for advertising and allows publishers to sell ads to publishers at super-short notice. Using an algorithm to factor in prices and budgets it matches adverts to publishers depending on the time of day and the content being viewed.

It cuts the cost of ad selling significantly – from 28 cents in each dollar spent to 2 cents, said Neal Mohan. That, in theory leaves more for the publishers – Google said they saw a 188 per cent lift in revenue as a result of participating in its ad exchange.

Obviously it’s a very different model to traditional media ad-buying – and could have a serious impact on the model of how publishers make money in the next five years.

Related: Why it doesn’t matter to Google if the Android appstore make less money than Blackberry’s