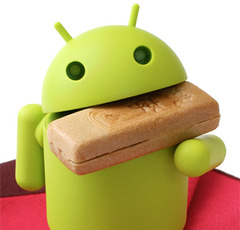 The Android app store brings in less money than the Blackberry app store, and is millions of dollars behind iTunes in the profit it makes, reports the BBC. Open philosophy is killing Android say the BBC.

But Google isn’t just in mobile for the cash.

While complaints about spam apps and the unwieldy interface on the Marketplace could and should be addressed, Android is still doing exactly what Google intended it to do.

And that wasn’t to make loads of money: just to be really popular.

Even though the money passing through Android MarketPlace last year – £62million was 17 times less than Apple’s App store turnover of £1.1billion and Blackberry’s £100million – the grim profit figures from Android apps doesn’t really matter to Google. Not just because they’re filthy rich and can afford a coaster or two, but because that’s not really the purpose of Android.

Where Google makes a lot of money is selling search terms. The more people search with Google the more money Google makes. WIth Bing Microsoft has started to encroach on that.

On Android phones – as in Chrome browsers, Google is enshrined as the default search engine – and it always will be.

TechCrunch called this Google’s moats and castle strategy – with search as the economic castle protected by moats.

Google’s interest with Android is just to make it really successful and widely adopted. That’s what they’ve done. Android phones make up 38% of the UK smartphone market, compared to 23% for iPhones, and they hold 54.7% of the market in the US to Apple’s 27.2% share.

It’s winningly attractive to both handset-makers, who get to use Android’s software for free, for Android users who get many more free and cheap apps than are available on other app stores, and for developers – getting a license to develop for Android only costs $25.

They might want to look at monetising Android a little better in future… but in the meantime, it is serving its purpose. Though, certainly, they could do a bit better in filtering the scam apps out of Marketplace.

On this topic: Google accused of sexism for censoring cougars but accepting sugardaddies