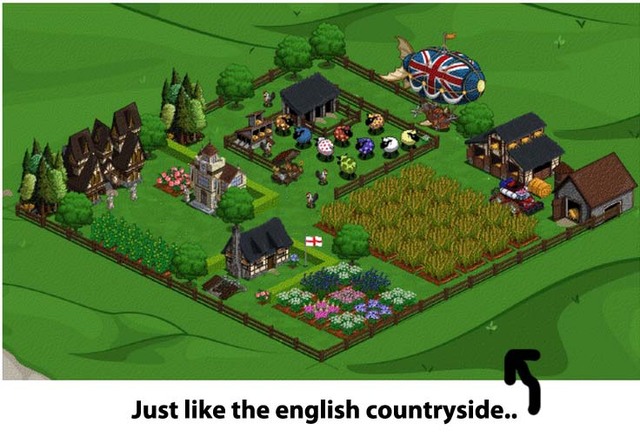 Farmville are bringing a little bit of Old England to the Facebook games market. They’ve just launched a new traditional English landscape in their farming game and it has lots of nice traditional features like sheep with union jacks on them and uh Zeppelins – for some reason.

The deal is that you – the Farmville user – go to the English countryside with a Duke and help him to get the most out of the English soil after it has fallen into disrepair.. you grow things like foxgloves, redcurrants and King Edward potatoes. I’m not sure if that’s an accurate representation of what the feudal system did for English agriculture- but never mind.

In Farmville’s England you also can raise lambs – unique lambs that you’ve bred yourself – and other new breeds exclusive to this British bit of Farmville: Shorthorn cows, Shire horses and Dorking chickens. Pretty great huh.

The appeal of Farmville is always supposed to be its nostalgic reminders of times past.. so this is a smart move see our article – Why Farmville has became the most popular game in the world .

And of course everyone loves the Brits at the minute what with the Royal Wedding and all that shiz.

Related: Farmville for Dummies! the book that finally tells you what it’s all about